John Galliano’s first show for Maison Margiela not a masterpiece 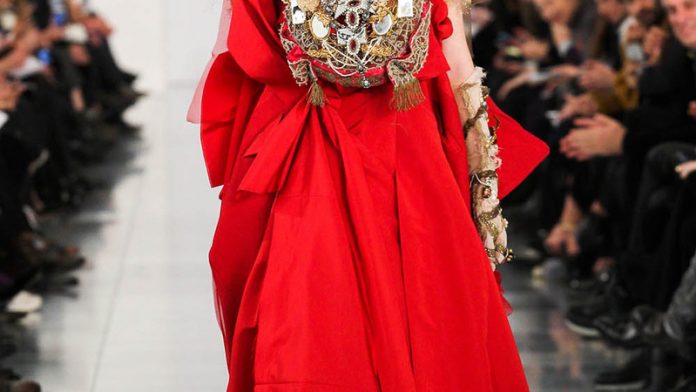 Four years on from the most spectacular fall from grace the fashion industry has seen, the rehabilitation of John Galliano can be time-stamped to the second after his comeback catwalk show ended.

Following the last model’s disappearance backstage, Galliano appeared briefly in front of the audience and bobbed a blink-and-you-missed-it bow, dressed in the white lab coat that is the uniform of the Maison Margiela label for whom he now designs.

During his 15 years at Christian Dior, Galliano turned the post-show bow into a performance in its own right, having his ateliers run up themed costumes – a matador, a pirate, a prince – in which he would stroll the catwalk, soaking up applause. This humble bow was the most convincing evidence yet that Galliano has left behind his previous doomed persona.

His London comeback show was the climax of white-hot anticipation in the fashion industry. The designer whose talent helped put London fashion week on the world stage in the early 1990s was an industry hero until February 2011, when an antisemitic rant at a bar in Paris led to his dismissal from Christian Dior.

Galliano was subsequently found guilty of “public insults based on origin, religious affiliation, race or ethnicity” and fined €6 000. By a coincidence of timing, his return to public life was made all the more dramatic by happening now, when antisemitism and religious hatred in Paris are once again the burning topic of the day.

But in stark contrast to the general hysteria that preceded show day – the hashtag #MargielaMonday was adopted by fashion fans who counted down the days – the mood as the audience gathered for the show was almost eerily calm.

Staged on the fourth floor of an office block in Victoria, the steel floor tiles shiny as new pins, the stark, clinical set was true to the avant-garde, deconstructed aesthetic of the house founded by Belgian designer Martin Margiela. With soft classical music playing in the background, and the audience ushered to elegant curved white chairs, the atmosphere was solemn, almost ceremonial.

But then, it is not the average fashion show that can boast Kate Moss and Rabbi Barry Marcus of London’s Central synagogue in attendance. The 180 chairs were in two long rows, so everyone had a front row seat. (In this respect, Galliano was clearly determined not to offend anyone.)

The guest list reflected the respect he still commands in the industry. Anna Wintour flew in, while the French fashion establishment’s goodwill was represented by Emmanuelle Alt, editor of French Vogue. Designers Christopher Bailey of Burberry and Alber Elbaz of Lanvin were there.

There was plenty of time to assess the lineup, because – some things never change in fashion, after all – the show was delayed 15 minutes for the late arrival of Moss.

Maison Martin Margiela Artisanal is usually shown during the haute couture shows, which take place in Paris in a fortnight. Galliano’s choice to show the collection in London during the menswear schedule was explained by the company as a nod to the designer’s “formative years and beginnings in the industry”.

This was widely interpreted as a nervous bid for a friendly home crowd. Galliano, four times British designer of the year, retains a huge London fanbase which has welcomed the opportunity to give him a second chance.

The first outfit on to the catwalk was a beige, safari-styled jacket with raw, unfinished seams, teamed with tights split between black on the outside and nude on the inside of the leg, the colours continuing to divide a pair of sculptural high heels. So far, so very Margiela. But the pièce de résistance was the trim on the jacket, which was made up of 20 or 30 matchbox-sized toy cars, re-appropriated as shiny black embroidery.

It was an idea that fitted nicely with the ethos of the Martin Margiela Artisanal collection, which is rooted in making fashion out of found objects. But in its sense of fun, its irreverence and imagination, the toy car was also a very Galliano touch, and a reminder of the winning exuberance and eccentricity Galliano brought to fashion in the days before that personality became a horrible parody.

The question on the minds of many in the audience before this show was how – or rather if – the very different fashion philosophies of Galliano (showmanship, extravagance, lusciously curved bias cuts, 12 pairs of false eyelashes on every model) and Margiela (anonymity, subtlety, androgyny, evening dresses made out of old trouser lining) could work together.

Here, Galliano did rather well, by employing a humour and sense of fun that brought a welcome frivolity and fun to the Margiela aesthetic, which can sometimes feel dragged down by theory. Faces were made out of shells on the front of jackets and the back of dresses, so that the clothes came to life as they walked the catwalk, giant plastic eyelashes fluttering above conch-shell pupils.

But the challenge facing Galliano is not simply to convince the fashion industry of his talent, which is still evident. Fashion moves fast, and four years is a long time in the wilderness. If Galliano is to please Renzo Rosso, the owner of Maison Margiela, he will have to show he can make the Margiela brand relevant, and reach a new audience among a generation for whom his inspirational early work is not even a memory.

The show was greeted with hearty applause, but no standing ovation. This was right and proper: it was a good show, but not a masterpiece. Galliano still has his work cut out.