Penny Siopis does it time and again 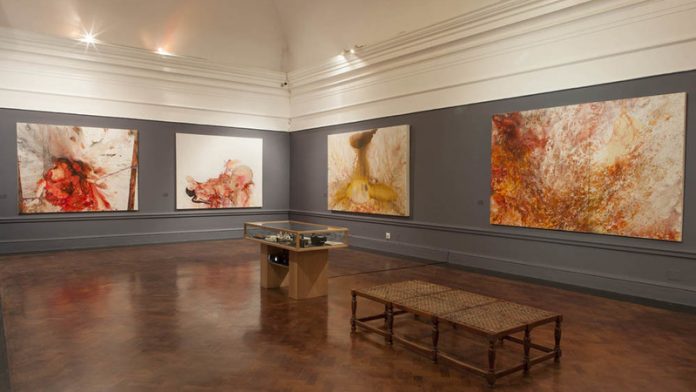 Thirty years ago, the painting hung in more or less the same spot. It had, and still has, an astounding presence. The judges of the second Cape Town Triennial in 1985 awarded it a coveted merit award medal. Previous recipients of the award include William Kentridge and Peter Schultz.

New, vibrant and alluringly sensual, viewers could not keep their eyes off Penny Siopis’s Still Life with Watermelon and Other Things (1985). A cornucopia of decadence, the theatrical setting is fronted by a table of overripe fruit and goodies, giving way to a grand empty room from which the gluttons had just departed.

The reference to classic vanitas painting in all its formality was startlingly original, the political message subtly embedded, and the presentation almost three-dimensional in its heaviness and use of globs of paint. You wanted to pick out the watermelon pips. In a recent interview, the artist calls it “a still life in crisis”. From the beginning, the customs of art-making were her concern. The sponsors of the event, the Rembrandt van Rijn Art Foundation, immediately acquired the large, densely impastoed painting.

The painting comes vividly to life in the timely 2015 retrospective, Penny Siopis: Time and Again, in the same institution where it debuted. It is on loan from the foundation – as are a number of other important works, showcasing a remarkable creative career. Some earlier works, most now well known (after that prize-winning painting, the country’s art institutions clamoured for her work), hint at her passion, from the start, for pushing to the limit the very media of art-making.

In an era when imagery battles in fast flashes of kaleidoscopic communication, when visitors to museums look at art and themselves through their cellphone cameras, one of the glorious by-products of this exhibition is a reminder of originality, the “real” of art. Placing some of her most recent pictures just a door away in this large, embracing and spread-out exhibition was an insightful decision by curator Ernestine White. It makes the link.

These newer works, three decades later, has Siopis hands on, in a different medium of picture-making. Yet she continues her fierce adventure. On these large canvasses, colourful inks and glue comprise an intuitive process: taking chances with the materials, inventing images on the way and, in the process, negotiating happenstance. The medium is the manner, the be-all, as it always has been for her.

Penny Siopis’s ‘Still Life with Watermelon and other Things’

Book-ended by the first works, now known and coveted as the “cake paintings”, and those from her previous show, Who’s Afraid of the Crowd in 2011, the retrospective sharply draws together the strands of her artistic investigation. Over the years that has ventured from video to installation and through various social themes. These are well represented.

In all this, the overarching impetus of her art is what her late husband, Colin Richards, called a “creative affair with materiality and surface”. It is all over this show and it drives this important event with a lyrical dynamic. Since those first years, viewers fell under the spell of the beauty of Siopis’s art. There is no other way to describe that visual elegance and refinement, of how form and substance come together. But those initial powerful impressions and the sensuality of the work sometimes veil meaning that runs deeper, is more complex and is worth contemplation.

This exhibition successfully shifts the focus. It opens avenues of closer engagement for viewers as much as it pays tribute to the artist. Taking up the clue of the exhibition’s witty Sisyphean title, visitors are prompted to consider the importance of time and history in Siopis’s art. A retrospective is, by definition, a view of history, both personal and in a broader cultural and social context, and here it comes fully into play.

One traces Siopis’s engagement with “the signs of the times” – such as the crisp satire of that famous 1985 still life, the punch of her Pinky-Pinky period. We set those against our own experience of life and art in South Africa. Another aspect of time in the recent work delves into a philosophic mode. The imagery derived by chance from ink and glue is bound to the very process of time. As Siopis professes in an interview, it all comes together in the moment. Three decades ago, that moment was different and delivered a singular picture. But, as history here shows, the results of Penny Siopis’s endeavours remain as potent.

Together with the fine Wits University Press publication (wonderfully free of highbrow “art speak”) that accompanies it, Time and Again confirms the stature of Siopis as an artist of individuality and note. In the big-ego and money-market world of contemporary art, she simply gets on with her passion and mission. She contemplates and makes – time and again.