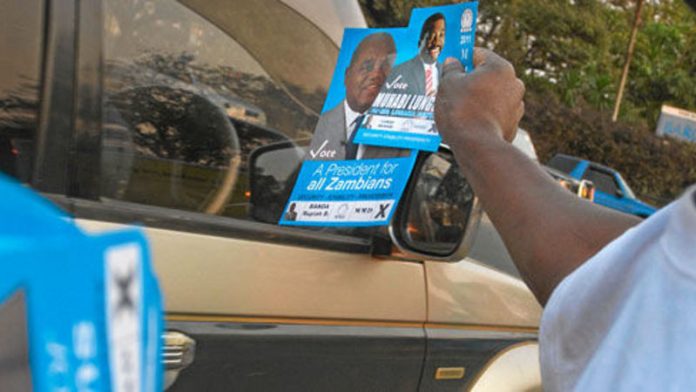 Zambia’s ruling party candidate Edgar Lungu on Saturday maintained a slim lead after most votes had been counted in this week’s presidential poll, but his closest rival said the election had been “stolen”.

The ballot was triggered by the death last October of the incumbent president, Michael Sata.

With the results counted from 146 out of 150 constituencies, Patriotic Front candidate Lungu led rival Hakainde Hichilema 47.96% to 47.17%, according to figures released by the Electoral Commission of Zambia.

The final tally is due later in the day and the remaining four constituencies are considered traditional strongholds for the ruling Patriotic Front Party.

Hichilema, one of Zambia’s wealthiest businessmen, accused the commission of manipulating the results in favour of Lungu – the defence and justice minister in the southern African state.

“The stolen election does not reflect the will of the people of Zambia,” he said. “If Edgar Lungu is sworn in, he should know that he is an illegitimate president.”

Low voter turnout
Turnout for the election was around 32% as heavy rains disrupted voting across much of the landlocked country. Observers said the ballot was conducted in a fair manner.

With another election scheduled for late next year when Sata’s term had been due to end, the winner will have little time to turn around a stuttering economy in one of Africa’s most promising frontier markets.

Zambia has averaged 6-7% growth as the mining sector boomed but that slowed to 5.5% last year, the International Monetary Fund said, and could ease further with the price of copper reaching a six-year low this month.

Lungu, a former lawyer with a laid-back, populist style, has used his campaign to tap into the grassroots support of his predecessor Sata, promising voters cheaper food and fuel.

Hichilema has said that if he wins, he will draw on his experience in the private sector to attract foreign investment and diversify an economy, where copper accounts for 70% of export earnings. –Reuters

Readers write in about the electoral system, Zambia's elections and the M&G's story on Naspers.
Read more
Africa

Everything about the elections seems fine until one gets to read or listen to foreign media.
Read more
National

Police opened fire on the opposition United Party for National Development supporters after the party refused to cancel a campaign meeting in Lusaka.
Read more
Advertising