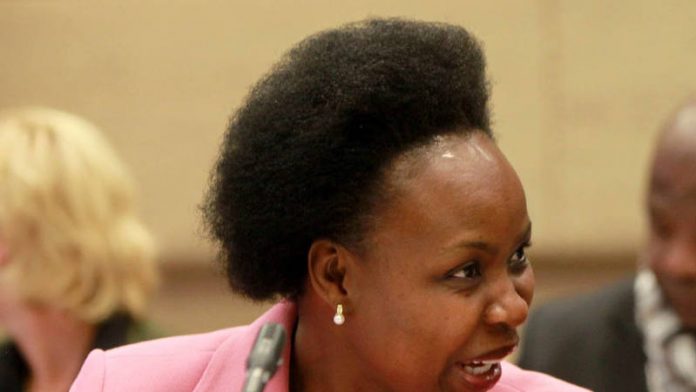 “The Minister of Human Settlements, Lindiwe Sisulu, MP, has placed the chairperson … on leave of absence with immediate effect following allegations that appeared in the media in November 2014,” department spokesperson Ndivhuwo Mabaya said in a statement.

“The minister would like to conclude this matter as soon as possible to protect the integrity of the chairperson and that of the NHBRC.”

In November, the Mail & Guardian reported that Madumise admitted receiving R1-million in cash from Krejcir in 2009.

In an affidavit dated April 16 2011, Madumise admits she received R1-million in cash from Krejcir who, in exchange, allegedly expected to have his asylum application fast-tracked.

Responding to  amaBhungane at the time, Madumise insisted the funds were meant to be a donation and not meant for her.

“If information had been made available to me that the funds were meant to be part of any corrupt or opaque deal, I would have rejected the funds. I only acted in terms of the information that the money was a donation,” she said.

She did not disclose to whom the donation was to be made, but another affidavit in the file discloses that Krejcir initially tried to make a donation to the ANC through secretary general Gwede Mantashe, but was rebuffed.

The affidavits, five in total, appear to have formed part of the investigation of Krejcir associate George Louca, who stands accused of murdering Teazers boss Lolly Jackson almost five years ago.

Louca, who is standing trial under the name George Smith, was granted a postponement by the Palm Ridge regional court on Monday, in order to make representations to the National Prosecuting Authority. – Sapa, Staff Reporter

Stakeholders in the built environment must submit their written comments on the proposed Bill by 30 October.
Read more
Press Releases

The Constitutional Court confirms that rental market developments must be enrolled with the NHBRC.
Read more
Press Releases

A registration category for building inspectors, aimed at protecting the public from substandard building practices, will be launched this month by the South African Council of Project and Construction Management Professionals.
Read more
Press Releases

The Department of Human Settlements is visiting communities in provinces across the country to allow public comment and participation in the formulation of the Housing Consumer Protection Bill.
Read more
Press Releases

The Supreme Court of Appeal ruled against Xantha Properties 18, as homes being built for leasing and rental purposes must be enrolled with the NHBRC.
Read more
Opinion

Walk the talk against GBV

Mr Ramaphosa, you have seen and listened. Now it is time to make SA safe for women
Read more
Advertising