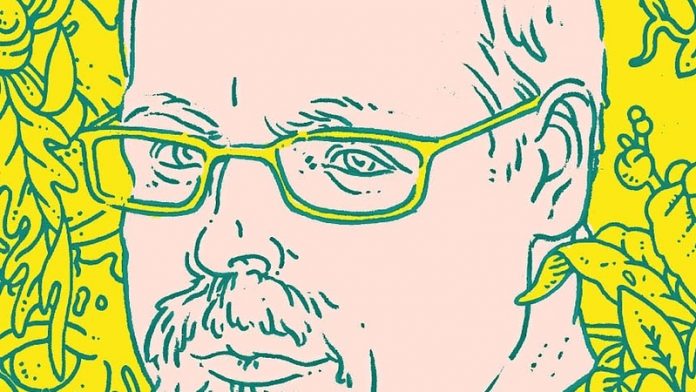 The three volumes of Jeff VanderMeer’s Southern Reach tale appeared, in short order, over the course of 2014. The author was emphatic, though, that this is not the result of chopping a long tale into three, but the product of deliberate design.

Appropriately for a narrative in which a lighthouse dominates the landscape, VanderMeer uses the metaphor of an expanding lens to describe the shape of the series. Annihilation, at the lens’s narrow edge, allowed us to accompany a prickly biologist on an expedition run by the secret government Southern Reach Authority (SRA) into a spatial and temporal anomaly – Area X – that has appeared on the coast. Most expeditions perish there.

Those it spits out are shadowy copies of their former selves, demented, riddled with fatal cancers, or othewise inexplicably different.

In Acceptance, the lens narrows towards its farther edge: we’re back on a journey through Area X with Control and Ghost Bird, the version of the biologist that returned, augmented by the perspectives of lighthouse keeper Saul, who became other and stayed, and of the previous SRA director, tied to the area by childhood memories and regrets.

The descriptor most often employed by reviewers of the series is “Lovecraftian”, a subgenre of horror fiction. From one perspective, that’s the obvious label for a narrative that invokes a growing sense of nameless terror about invasion and change. HP Lovecraft, working in the 1920s and 1930s, is credited as a key architect of the weird horror genre within modern speculative fiction.

But Lovecraft is a deeply problematic figure. Since 1975, the World Fantasy Awards has presented winners with a trophy statuette of him sculpted by Gahan Wilson. Now pressure is growing for that tribute to be dropped (perhaps in favour of an award representing Octavia Butler) because of his repugnant racist views. What makes The Southern Reach Trilogy so powerful is the way it employs much of the atmosphere found in Lovecraft – that sense of all-powerful, unknowable, terrifying otherness – in such a subversive way that the result is profoundly anti-Lovecraftian.

Lovecraft was a racist, and not in a merely reflexive, man-of-his-time way. His literary horrors are distilled from his revulsion for physicality and sexuality, which he saw embodied in “sneering, greasy mulattos”, “the Mongoloid problem”, “simian Portuguese” and even more rabid descriptions of Jews and African-Americans.

His letters are filled with implicit calls for genocide, and occasionally a more explicit hankering for “a kindly gust” of cyanide. Those same impulses infuse his literary work. Its discourse is dominated by Anglo-Saxon men living in terror of alien pollution, represented by the vast, unknowable universe of others against whom they struggle. Had he not been a near-recluse, he might have enjoyed a dop and a braaiside chat with Steve Hofmeyr. And though his imagination helped to shape a genre, his writing style took Gothic to a new level: florid, hyperbolic and leaden.

Lovecraft cowered from change, especially change that shifted the balance of power away from his Aryan male heroes. VanderMeer puts enquiry at the heart of his trilogy, and much of that is into the nature of change and identity, and how they can be seen and lived differently. His main protagonists are women, including women of colour. The biologist in her final form does not see the mutation of Area X as malign, and nor do the cranes, ibises, foxes and owls. Place is an actor in the story and it, too, has a different view of events. Change is neither necessarily good nor bad, merely inevitable.

The Southern Reach Trilogy explores shifting balances of power: between individuals such as Control and Ghost Bird, or the former director and her assistant, and between the hard power of state agencies and their minions, and the more literally amorphous power of the animals and entities of Area X. Time in the area bloats and compresses and that, plus the multiple time lines of the different narrations, allows us to see protagonists both exercising and subjected to power, often in a sequence we cannot predict.

VanderMeer’s inspirations for the work were multiple. The imagery, he says, derived from hiking the Florida wilderness and a vivid, post-dentistry dream. The ideas owe something to the Gulf 0il spill, Chernobyl, and – particularly in Authority – the manipulations of “a dysfunctional secret agency trying to figure out what’s going on”. The acknowledgments include Rachel Carson, Jean Baudrillard, Iris Murdoch, Tove Jansson, who created the delightful Moomins.

As the series moves from the secret agency’s obsession with what is happening to the more complex issues of why, it also becomes clear that it is not a Lovecraftian horror tale, despite its powerful, genuinely frightening evocations of horror. The why has parts of a classic science fictional answer, although VanderMeer is careful not to close too many speculative doors in its unfolding.

Fans who know VanderMeer’s prose best from his Ambergris series – which deliberately employed a baroque register – may be surprised by the language here. Although the visions are sometimes Gothic, the writing never is. Nature is described in spare, beautiful prose; dialogue is naturalistic and often rests on what is not said. The Ambergris obsession with fungi has diminished, although an interest in decay and luminescence lingers, along with imagery of downward spirals and multilevel structures concealing mysteries in their lower levels.

If literary ghosts hover over the text, Lovecraft’s is only a pale and shadowy one, somewhere in the contextual background. Above any American writer who lets nature strike back, the rather more benign wings of Henry David Thoreau will always flap. But The Southern Reach Trilogy does not fit neatly under any of these, or other, categories. Its triumph – the thing that makes it so joyfully anti-Lovecraftian – is to bring together weird SF, classic stories of first contact, horror, psychological thriller, conspiracy mystery and thoughtful environmental politics, and weave them into one gripping tale.

As Lovecraft would never have said, but VanderMeer recently did: “Contamination is really important to the health of fiction.”

The former began as a contribution to the latter, but took on a life of its own – whereupon Rothfuss created another tale, The Lightning Tree, for Martin and Dozois’s anthology of fantasy fiction. Both of Rothfuss’s tales, however, focus on supporting characters in the Kingkiller Chronicles series and on how magic operates in their world.

The narrator of the novella is Auri, with whom Kvothe, hero of the main series, strikes up an unpredictable, episodic friendship. She pops up on the roof of the University where Kvothe studied: tiny, fragile and fey, offering company, gifts and enigmatic advice. Neither Kvothe nor the reader is entirely sure whether she is human.

In this book we learn how she survives in the Underthing: a warren of old, deserted rooms and passages below the college. Auri had been a student, like Kvothe, until something in her magical apprenticeship tipped her mind awry.

Now, her days are governed by her obsessive-compulsive disorder: keeping herself small and hidden, and discovering, ordering and christening things she finds among the detritus of the Underthing.

Written in a more formal literary voice than other books in the Kingkiller Chronicles series, Slow Regard is on one level a meticulous, compelling study of a strange but beautifully human personality. It makes an entirely different kind of sense in the context of the series, where the oldest, darkest, strongest and riskiest magic rests in the naming of things.

Rogues is a much lighter set of encounters with crooks, tricksters and other characters who are not what they might seem. Unlike some other recent collections, every story here is a gem but each is distinctively different, making the book a worthwhile purchase.

In The Lightning Tree, Rothfuss fills in some backstory for Bast, the genuinely fae (otherworldly, fairylike) innkeeper’s assistant. We are permitted to deduce just what variety of fae Bast is (hint: it involves lust, hairy legs and a set of Pan pipes).

Ever consistent, Rothfuss conjures again the magic that can be kindled when something is named: the power of words at the heart of the writer’s art.

The mushrooms are coming!