‘Death was in front of us, we fled’ 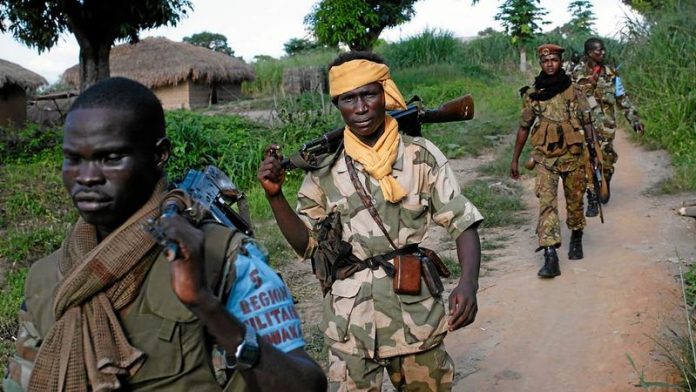 In a narrow canoe hollowed out of a tree trunk, a teenager, Valentine Pasi, her baby son and five young brothers-in-law ended their desperate race to safety across the Ubangi River. Behind them were the murders, rapes and desolation of home. Ahead of them, profound uncertainty.

For many, this deceptively placid river has become the sole safe passage from the catastrophe engulfing the Central African Republic (CAR). A fresh surge of more than 30 000 refugees has poured across the unguarded border into the Democratic Republic of the Congo (DRC) – itself hardly a model of peace and stability – in the past month, according to immigration officials. They come daily in fishermen’s canoes with what few possessions they can carry and tales of intensifying horrors in their homeland. Some bear their testimony in bullet wounds.

An estimated 4 000 have settled in or near the riverside village of Gbangara, one of Africa’s remotest places, nearly five hours’ drive through the jungle from Gbadolite, a frontier town where only two or three planes land each week.

The new residents have fashioned low-slung homes out of tree branches and dried grass, surviving off cassava, coffee, fish and fruit, and have even constructed a modest church. The thickly forested hills of the CAR are visible in the distance, about two hours away by boat. Occasionally, gunfire can be heard as the largely Christian Anti-balaka militia battle with the mostly Muslim Seleka.

Pasi (19) was in her brother’s house in Gbada village, about 35km away, when Seleka gunmen burst in. Her brother tried to escape but was shot dead along with two more brothers and nine other people. Pasi suffered a wound to her toe but managed to flee with her husband’s five brothers, ranging from three to eight years old, leaving all their possessions behind.

They spent almost five days in the bush, eating yams and knowing they could be killed on sight. “We were hiding among the trees and had to speak very quietly,” she said through an interpreter as she cradled her three-month-old son, Pabolo Ruphin. “I’m still afraid to speak properly now. Every time my baby started crying, I had to breast-feed immediately.”

Last week, Pasi tried to cross the river but was cowed by gunfire. A day later, a fisherman heard her shouting for help and delivered her and the children to Gbangara. She was reunited with her husband, Arnol Obe, and other family members but remained nervous. “Now I’ve arrived here and I don’t know what I’m going to do about living,” she said. “When I hear someone beating a cooking pot, it reminds me of gunshots.”

‘I will never forgive them’
Later that day, she went down to the riverbank to wash clothes and fetch clean water from a spring. Then her father-in-law, Pascal Mbetiaka, who could not fit into her canoe, was brought ashore.

He said: “Death was in front of us and we had to run away. The Seleka go and come back. People run into the forest but the Seleka follow them there and kill and rape. I will never forgive them because what they are doing is unacceptable.”

He was delighted to see his wife and children for the first time since his escape. “I’m happy because since I arrived I have seen many people from my village. I say thanks to God. I will go back home as soon as there is peace.”

Every new settler in Gbangara is a Christian forced out by the Seleka but atrocities continue on both sides almost two years after Seleka rebels fleetingly seized control of the majority Christian nation, which has suffered decades of neglect and coups.

Last month, Human Rights Watch reported that hundreds of Muslim residents in western parts of the CAR were trapped in enclaves in “deplorable conditions”, fearing attacks if they left.

At the start of the year, the Seleka strayed on to an island in the Ubangi River and killed three people, striking fear into refugees who often use the island as a crossing point or a place to farm coffee.

Among those who have lived the CAR’s nightmare is Matthew Balikuzu (52), chief of a village in Bolo who was forced out just over a month ago and spent four hours shouting for a fisherman to pick him up.

He recalled: “Four young boys were playing in the sand. I saw the Seleka come and kill them with guns. The Seleka attacked a friend of mine, another chief, and cut his throat while he was working on coffee. All the homes were burned, the cars and bikes lost. I feel bad because, as a chief, I need people to live together.”

“Whenever Seleka people arrive in a village and find beautiful women, they have to take them. The women could be married – they don’t care. They even take young girls. I am angry with these people. I will never forget; it will be hard to forgive.”

Thirry Ndema Karakete (28), a student who arrived two months ago from the village of Bouda, about 40km away, saw his father, grandmother and three brothers shot as they ran. “There was a fight in the village between Seleka and Anti-balaka, and the Seleka were killing many people,” he said.

“They burned all the homes; even the hospital was destroyed. I saw 10 people killed and no one could bury them. They didn’t want to see anyone alive. They consider everyone Anti-balaka and they sometimes even rape girls who are less than 18.”

Like other refugees, Karakete and his family are trying to carve out a new life in Gbangara, but he suffered fresh grief last week when his two-year-old son, Tchianeze, died inexplicably. “When I woke up at 6am, he was fine and ate his breakfast. Then I went fishing and at 9am people called me to say, ‘Your child is no longer alive.’ I didn’t know what to do. I was about to kill myself.

“I think of my son, my father, my brothers. I’m still here; I don’t know what to do. My son spoke very well – we could talk and eat together.”

Karakete and his wife Nathalie are struggling to scrape enough together to feed their remaining four children in a place where medical care is nonexistent. Many rely on nearby Congolese villagers to hire them as farm hands.

Women in Gbangara could be seen last week pounding cassava into powder while men spun fishing nets or sliced bark off branches with machetes. Clothes washed in the river were hung up or laid across grass roofs to dry in the hot sun. Smoke rose from cooking pots on charcoal fires, fish were piled on tables and thousands of coffee beans spread on the dusty floor. The sound of chickens, goats and crying children filled the air.

Jean Deni (35), a nurse who came in November with his wife and three children, reflected: “Living here is not easy. People suffer from malaria. Children are without school. There’s nothing and many people are suffering from hunger. We don’t know how long we’ll stay here. We will go back as soon as there is peace.”

The sudden influx into Gbangara poses a test for the United Nations High Commissioner for Refugees (UNHCR) and the World Food Programme, which are already operating a camp for 13 000 people closer to Gbadolite.

Céline Schmitt, spokeswoman for the UNHCR in the DRC, recently went to the border to assess the situation. “We saw people crossing and they had bullet wounds so we had to evacuate them quickly to hospitals because the health centres at the border don’t have the capacity to treat them. We’ve seen many children who are sick. There is a problem of malnutrition and we’ve seen many little graves, so the people are in quite a desperate situation.”

The UNHCR has sent a registration team to verify the Congolese government’s estimate of 30 000 refugees since December. “What the refugees are telling us is that there is increased violence and conflict between the Seleka and Anti-balaka on the other side,” Schmitt said.

“They are fighting and they are accusing the population of taking sides. They attack the villages, they burn houses, women are being raped, people are being killed. People cross the border and look for safety here in Congo.” – © Guardian News & Media 2015

David Smith
David Smith is the Guardian's Washington DC bureau chief. From 2010 to 2015 Smith was the Africa correspondent for The Guardian for which he was based in Johannesburg, South Africa