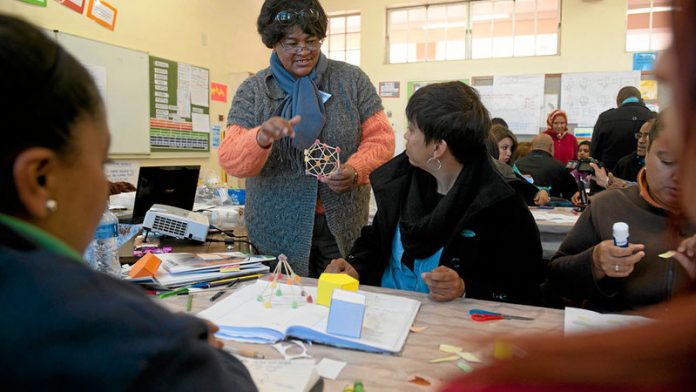 Bad policy almost always has one redeeming feature that is often not adequately appreciated: it reveals the full extent to which those who have developed the policy are out of touch with the reality they are supposed to address.

This would appear to be the case with the department of basic education’s recent proposal for the in-service training of mathematics teachers.

The department has proposed that training should take place during the working week, as opposed to on weekends or public holidays, by amending school timetables. Teachers will be expected to score 80% or more in weekly tests and those who do not will be identified for more intensive support, which subject advisers are supposed to provide in classroom visits. These under-80% teachers will also be placed in support teams of teachers with a better understanding of the relevant concepts.

On the face of it, the proposal might seem reasonable. It emanates from the detailed 2013 report of a ministerial task team on the implementation of the department’s mathematics, science and technology strategy.

However, we suggest that the proposed interventions reveal a profound lack of departmental appreciation of the realities many schools and teachers face. The interventions require additional time and human capacity, when evidence suggests – and the task team report notes – that many schools and district education offices are already under-resourced in exactly these respects. Implementing the proposals is likely to compound existing dysfunction.

Although the original task team report found that under-resourcing is a major problem, none of the report’s recommendations address this. The flaws in this specific proposal therefore reveal a much more fundamental unwillingness to tackle the problem of resource shortages.

Instead, the national department makes policies that deny the existence of such challenges and thereby load further problems on to schools and districts. That, in turn, is likely to undermine the worthwhile objectives of an intervention, both in their effect on the teaching profession and on educational outcomes.

The problems the task team report identified are important and the orientation of some of the proposals reflects progress.

Teacher training is indeed critical and is not currently achieving its desired effects. It is important that subject advisers spend more time working side by side with teachers in classrooms. And it is also crucial to design training with the recognition that teachers, as with all other employees, have the right to nonwork time.

But none of this can be addressed by closing our eyes to the time- and resource-constrained conditions in which teachers and subject advisers work every day.

You can’t timetable miracles
The most disturbing aspect of the department’s proposal is how it envisages implementing it. The intervention is apparently part of a broader plan to structure teacher training under a “1+4” model – in which teachers are trained on one day of the week and teach normally for the other four days.

It does not take much mathematical ability to see what huge resource implications this has. To achieve the same amount of teaching time in a week, school days would have to be made longer and teachers would have to work longer hours during the week. In reality, teachers would end up working for far longer because the proposal notes that, whereas they previously received 10 days’ training, they would with this plan receive 30.

What additional resources are being provided to make this happen? None, it seems. The department appears to assume that all the required time can be found by schools “adapting their timetables to support the model”. Forget the conjuring-up of loaves and fishes: school management teams would need to conjure up an extra “20 hours of teaching time per class per year”.

In many schools this will simply not be possible, leading to unattended classes – with all the consequences that implies. The plan also ignores the task team’s suggestion that “specially trained substitute teachers” should be used to facilitate the training process.

Teachers as martyrs
There is a good deal of rhetoric in education circles about making teaching a “profession of choice”. Some official attention has been given to teacher salaries, but remarkably little to teacher workloads. Yet we would argue that excessive workloads and unrealistic expectations are major contributing factors to much of the dysfunction and conflict in the country’s education system.

A common misconception assumes that teachers are not really working unless they are in a classroom teaching. This fantasy is expressed in the fact that, unlike many other countries, South Africa does not have protected noncontact time during the school day.

Compounding this, the popular press have too regularly rolled out teachers who work every hour of their waking lives as some kinds of role models.

But such a model is absurd: it is not sustainable for most people and therefore is not generalisable to the whole profession. It certainly will not attract talented individuals to the profession, nor retain them. Basing policy implicitly on such expectations is a recipe for disaster.

Here, it is important to note that teachers are not resisting training per se. The task team report observed that “teachers are generally desperate to upskill themselves and have become frustrated with the lack of proper training offered and supplied by their district departments”.

The problem, also noted by the task team, is that teachers are tired of being expected to attend training in their personal time. Although the intervention appears to be a step forward here – by recognising that teachers should not be expected to do training in their personal time – the suggestion of changing the timetable is not feasible and suggests it is a backward step.

Assessment and support
The final major flaw in the proposed intervention is how it intends to identify and support weaker teachers. The department’s recent statement says that teachers will be tested twice a week: once before their training (“pre-test”) and once after (“post-test”). If they score less than 80% on any post-test they will be identified for additional support during the week. As mentioned, it is primarily subject advisers who will provide this support, in “classroom visits”.

There are two obvious problems. First, given the vast scale of the programme, the tests will have to be electronic to be administered and marked on such a regular basis. However, electronic tests can work adequately for basic content knowledge, but they are unsuitable for testing a teacher’s ability to teach content, which is the ultimate objective of training.

The second problem again concerns resources. The ministerial task team itself noted that “administrative workload of subject advisers and curriculum support officials is too high”, and that “subject adviser-to-school/teacher ratios are unacceptably high, resulting in a lack of adequate support to the teachers”.

It also noted a “lack of resources at district offices”, preventing curriculum or subject advisers from visiting schools or working effectively. On quality, the task team said that “many subject advisers are not qualified for the subjects that they supervise”.

Yet the proposal appears to place most of the burden of support on subject advisers, despite the fact that these individuals are already overloaded and under-resourced, and some are inadequately qualified. Without equally dramatic proposals to reduce existing demands on these individuals, the intervention will clearly worsen an already inadequate system.

The department’s proposal appears to envisage an entirely top-down training scheme. Tests will presumably be standardised – and the support, therefore, too. The proposed system, says the department, “works on the assumption that teachers need assistance with the entire curriculum and not just [in] certain sections of the curriculum [that] they presumably have difficulties teaching”.

This leaves little room for teachers to identify areas of weakness for themselves. Those teachers who struggle less will feel patronised and alienated by such treatment. And such rigidity may well undermine the purpose of the intervention.

Bad policy intensifies problems
Although the task team report identified many important problems, it is unfortunate that its recommendations do not adequately and proportionately address them. Partly, there seems to be a continued denialism about resource limitations.

The department’s proposal builds on the task team’s recommendations but makes the consequences of this denialism worse by compounding resource shortages at schools. Because the original report notes these shortages, there is no excuse for neglecting them.

Systematic reform means that one cannot cherry-pick recommendations: any training intervention must provide a satisfactory answer to the existing resource problems and any new demands it will create. That is not currently the case.

Seán Muller is an economist in the public sector. Sara Muller is a qualified maths teacher with experience teaching in a township high school. Both write in their personal ­capacities

Teacher development lost in the focus on matric results

​Editorial: Teachers should have to undergo competency tests