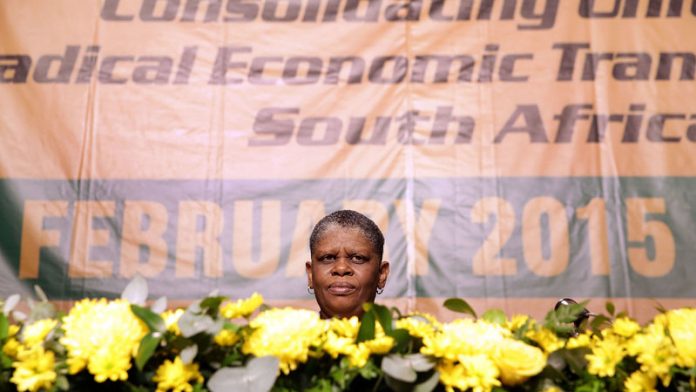 Julius Malema and the Economic Freedom Fighters’ removal from Parliament during the state of the nation address featured strongly in a number of speeches at the eThekwini regional conference the ANC held in Durban on Saturday.

While the party’s provincial leader Senzo Mchunu welcomed the EFF’s expulsion on Thursday night, the SA Communist Party (SACP) warned that some of the events at branches that led up to the eThekwini Regional conference were no different to the events that had taken place at the national legislature.

The SACP’s provincial treasurer Nomarashiya Caluza said that while the “behaviour (of the EFF) in Parliament” was uncalled for, it had been similar to events that had happened at the branches of the ANC’s largest region.

The sixth regional conference had to be postponed twice and the party’s provincial executive had to step in in a bid to ensure that the conference ultimately took place and new office bearers were elected. “Some of the things happening in the branches are not different from the EFF and the DA (in Parliament),” she said.

Moments before she took the podium at the Inkosi Albert Luthuli International Convention centre, the Congress of SA Trade Unions’ Durban Central secretary Mlondi Manzini said the EFF came from the ranks of the ANC. “We might be to blame for the (behaviour of) EFF. This country must not look like a banana republic.”

The EFF on Thursday carried out its threat to confront President Jacob Zuma over public money spent on his Nkandla home during his state-of-the-nation address, and were subsequently removed by police. The region has been polarised between those who support eThekwini mayor James Nxumalo and those who support the region’s current treasurer Zandile Gumede.

Delegates were expected later on Saturday to elect the leadership of the region – the ANC’s largest with 103 branches. There was a heavy police presence at the convention centre amid much singing and dancing.

Mchunu, who is also premier of the province, lashed out at the behaviour of the branches saying that some members had arrived at branches with guns while other members at various branches were physically assaulted. He said that senior provincial leaders who had attempted to intervene and resolve the impasse in the various branches were themselves insulted. “We condemn every type of insult at ANC meetings. It is wrong for ANC comrades to insult each other,” he said.

He urged members to respect the party’s rules. Mchunu praised Speaker Baleka Mbete’s handling of the events during the state of the nation address. – Sapa