Ukraine on back foot as key city falls 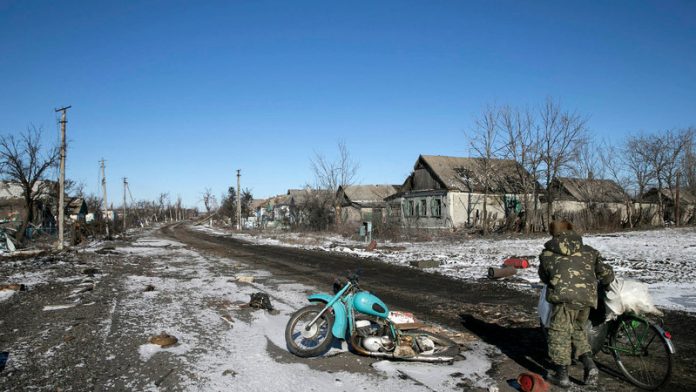 A long line of military vehicles crawled north on the highway leading out of the abandoned government positions in Debaltseve in eastern Ukraine, pulling a motley assortment of half-destroyed ambulances, trucks without wheels and tanks without treads.

Those soldiers who had managed to get out of the ruins of the besieged town were immediately recognisable, their wide eyes staring out of a thick coating of grime as they waited for buses to take them back to Artemivsk.

A group of national guardsmen fired their Kalashnikov assault rifles into the air to celebrate their close escape.

If Russia and the rebels continue to breach the ceasefire or otherwise overplay their hand, they are likely to face a much tougher United States response.

In what marks a strategic victory for pro-Russia forces and a stinging defeat for Kiev, thousands of government troops retreated from Debaltseve starting in the small hours of Wednesday, most of them on foot through the surrounding fields.

‘Captivity or death’
In the government-controlled village of Luhansk, which lies at the end of a deadly 16km stretch of highway out of Debaltseve, First Lieutenant Yuriy Prekharia described how he led 50 men through the fields and forests to reach Ukrainian positions. “We knew that if we stayed there, it would definitely either be captivity or death,” he said, as armoured vehicles passed by carrying hundreds of dirty soldiers. Heavy artillery boomed and rockets streaked through the sky as government forces tried to cover their comrades’ retreat.

Standing in front of the presidential plane in a camouflage coat before leaving Kiev for a visit to the front line, Ukrainian leader Petro Poroshenko said he had ordered the “planned and organised retreat” from the strategically important rail hub after the opposing side had denied access to European observers.

But the withdrawal seemed anything but orderly, and Prekharia said the decision to pull back had been made by the senior commanders on the ground when they saw that the situation was becoming catastrophic. Other soldiers said artillery and ambushes had been waiting for them on their way out.

Many of those wounded were left behind in the retreat from Debaltseve. (Gleb Garanich, Reuters)

Combat medic Albert Sardarian said he had been woken up at 1am for a sudden withdrawal in armoured vehicles with about 1 000 other men. Pro-Russia forces ambushed the column in the morning, so the survivors had to continue on foot, leaving their dead and wounded behind.

“There was one guy whose hand had been blown off. I could only stop his bleeding and put him in a comfortable place, hoping that the armoured vehicles following us would pick him up,” Sardarian said.

Carnage and destruction
Smoking cigarettes outside the hospital in Artemivsk, weary soldiers, many of them with light wounds, described leaving behind carnage and destruction in Debaltseve. “There’s no city left; it’s destroyed,” said a soldier with the call sign Sailor. “Two hours after the ceasefire, awful things started … Residents are in basements. Lots of bodies haven’t been picked up because the separatists are shooting.”

“It was a madhouse. It was Chechnya,” said a soldier named Igor Nekrasov, referring to the bloody separatist conflicts in Russia’s Chechnya region.

Nekrasov said he expected the opposing side to continue attempting to take strategically important cities, echoing the doubts that many in Artemivsk hold after two previous failed truces.

“You can’t trust the Russians. They lie, lie, lie,” said Nekrasov, a gunner in an armoured personnel carrier that was preparing to pick up more soldiers fleeing Debaltseve. “I don’t think this ceasefire will work.”

The Ukrainian authorities insisted that Debaltseve had never been surrounded, but army medics and soldiers who escaped the city said shelling and mines along the road had cut off the flow of ammunition, supplies and ambulances to the town for more than a week.

Debaltseve death toll
Kiev’s armed forces command said on Wednesday that 22 Ukrainian soldiers were killed and more than 150 wounded in Debaltseve in the past few days. But with many Ukrainian troops reported to still be in the city, it could be some time before the real death toll becomes clear.

The director of the Artemivsk morgue said the bodies of 23 soldiers had been delivered since Tuesday night. Many of them had bullet wounds, he said, suggesting close-quarters combat.

Russian state-owned television showed rebels hoisting their flag over a high-rise building in Debaltseve, as well as images of several dozen captured Ukrainian troops being led along a village road.

The seizure of the city, which holds a highway crossing and a rail junction connecting Donetsk and Luhansk, is a major victory for the breakaway “people’s republics” based in those two cities.

The fall of Debaltseve also represents a win for Russian President Vladimir Putin, whose government has backed the pro-Russia forces with heavy weapons and soldiers. In Budapest this week, Putin called for Kiev to give up Debaltseve.

The leaders of France, Germany and Ukraine, who met Putin in Minsk last week to hammer out a peace plan for eastern Ukraine, told a European Union summit that he had attempted to delay the ceasefire for 10 days to force the city’s surrender. – © Guardian News & Media 2015