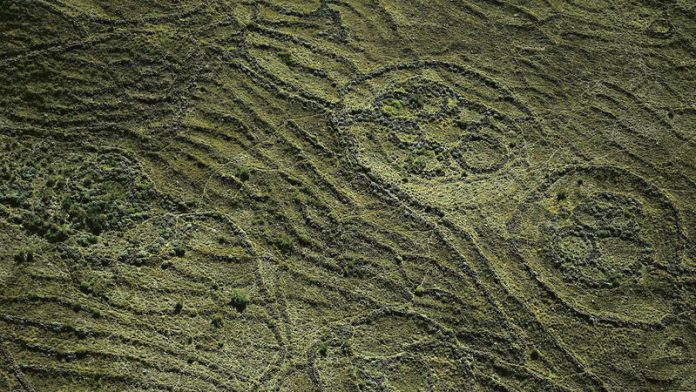 Forgotten World offers information about and insight into the stone-walled archaeological sites that range across the Mpumalanga escarpment.These spectacular stone circles, terraces and pathways have inspired many exotic and fantastical tales of alien occupation, ancient temples and celestial observatories; romantic tales that take hold of the imagination easily because knowledge disseminated about the people who built the sites has been omitted from the extensive, but often biased, annals of South African history.

The authors, a historian and two archaeologists, deftly pull together the current knowledge of these sites in a well-illustrated book. They have different areas of expertise, and work with different kinds of evidence. Thus the reader’s appreciation of the sites emerges from a varied and intricate tapestry of oral, missionary and written sources; a deep understanding of African social systems, agricultural and cattle management strategies; and a careful elucidation of material remains.

Delius et al call the area Bokoni, in deference to early 20th-century oral traditions that refer to the area as the “country of the Koni people”. Indeed, much of the information about Bokoni derives from interactions with other groups.

The oral history of the Bapedi, for example, records a number of clashes and alliances with the neighbouring Bokoni. This, albeit indirect, evidence roots the Bokoni firmly within a specific time period, and within a Southern African socioeconomic framework.

With this in place the authors are able to provide the reader with sufficient archaeological and historical background to understand the innovative ways in which the Koni defined their living spaces.

The book delves back into the first millennium CE to provide an understanding of the economies of early farming societies. In a clear and uncomplicated way, the authors touch on other key sites, such as Mapungubwe, to demonstrate the range of skill and innovation practised by early farmers.

They also highlight the importance of iron and steel to the farming enterprise, and show how niche specialisations, such as metalworking, would have been determined broadly by the availability of ore and wood to fuel the fires in the smelters. This differential access to resources gave rise to a vibrant trade in a wide range of local resources, such as salt, tin, iron, grain, livestock and pigment across precolonial Southern Africa.

International networks tapped into these regional trade networks by the end of the first millennium CE. The Arab-Swahili trade network was followed by the Portuguese and ever-increasing competition from other European markets. The control of trade and resources would have added to the political dynamics of the interior as leaders jostled for power over resources.

It was during the 16th century, a period of increasing international interest in ivory and metals, that Bokoni was first settled. The settlers altered and changed the landscape to increase agricultural yield and establish themselves on the high-altitude grasslands.

Houses and livestock were secured within high circular walls, each household’s farmland demarcated with stone markers, and terrace walls were set out and reinforced over time. Livestock was kept away from the grain crops by an elaborate trackway that funnelled them from the centre of the settlement to grazing lands and nearby water.

In a practical and visual way, the authors untangle the sites for the reader. They show how the walls of homesteads differ from terraced fields and road networks. By literally unpacking the walls they demonstrate how the terraces evolved over time.

The spaces within the stone circles and lines are then interpreted with reference to the large body of anthropological work on African farming systems, gendered spaces, and through the eyes of young herd boys who once lived at Bokoni.

These herders, probably whiling away time, pecked circles and trackways into stone slabs, creating enduring illustrations of their homesteads and houses. The aerial photographs of sites, juxtaposed with the stone engravings and clear reconstructions of the walled complexes, provide the reader with the necessary tools to begin to read and comprehend the Bokoni landscape.

The authors do not claim to have solved all the mysteries of the sites which were occupied for the better part of 300 years. The circumstances that compelled the people of Bokoni to settle the high-altitude grasslands and advance an agricultural system unique to the area are not completely understood.

The authors cast their net wide and sought a solution among other islands of agricultural ingenuity in Zimbabwe and East Africa. Did the people of Bokoni modify their farming practices to cultivate maize, a grain that has different water requirements to the traditional sorghum and millet? Or were there other social or political pressures that inclined them towards the intensification of agricultural produce?

By the 1830s the Bokoni settlements had been abandoned, and the people incorporated into other chiefdoms or into the missions. Historically, the middle of the 19th century stands out as the period of fortified capitals. Chiefs set up their capitals on the summits of hills, which they defended with stone walling. From these lofty and protected vantage points they were able to resist the onslaught from African and European assailants.

The authors surmise that the expertise of the displaced Koni would have proven invaluable in the planning and building of these mountain strongholds. They also feel the hand of the Koni can be seen in the walled fort built at the Berlin Mission Station, Botshabelo, and the emergence of the mission as a major centre of agricultural production.

All who have a desire to understand the history of South Africa will enjoy this book. The photographs capture the exquisite nature of this cultural landscape, the narrative unlocks the import of these sites, and the book, as a whole, provides the inspiration to celebrate, protect and preserve these important places.

The photographs capture the nature of this landscape, the narrative unlocks the import of these sites.

Aced: ANC secretary general suspended from the party for the duration of his corruption trial