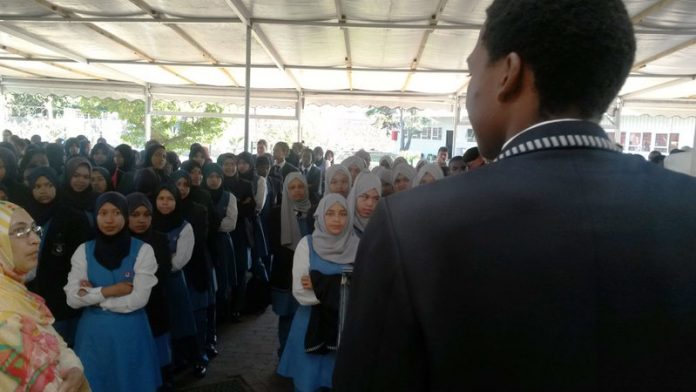 Unlike most other independent or private schools, The Leadership College in Manenberg, one of Cape Town’s most gang-ridden communities, gives poor pupils with academic potential the opportunity to attend at no cost.

The school opened its doors in January 2010 and was the brainchild of college director, Ashra Norton.

“I had an idea to have a good school in the area where children can still walk to school, especially for those unpolished diamonds who just need a little encouragement. We put up so many posters, and also by word of mouth [the school became known], as more parents heard about the school. This is how we got our first group of students,” she said.

Norton said she had the idea for the school 33 years ago, but plans only materialised in 2008, while she was working as a teacher at Islamia College in Lansdowne.

The school, which started with no more than 47 pupils, three teachers and a principal, now caters for 530 children who achieved top marks at their previous schools.

“When the demand for the school grew, we started recruiting the students directly from 14 feeder primary schools in Manenberg. The principals and a teacher at the schools nominate a grade seven student who fits our criteria. I personally interview each child.

“I believe an exam isn’t a good way to determine who warrants a place at this school. We are more interested in the child’s personality and level of commitment to their education,” she said.

Funding
The school receives 60% of its funds from the provincial government and the rest is sponsored through scholarships and businesses who support the idea of having a school of its kind in the area.

“Because we are a no-fees school, the criteria for our students are very specific. Their household’s total monthly income shouldn’t exceed R8 000. For those families whose income may exceed this a little, they are requested to make a contribution to the school.

However, most of our children come from child-headed households or those dependent on social grants,” she said.

Norton said the school pays for every pupil’s uniform, stationery, textbooks, field trips and provides a daily lunch for some.

Pupils are taught all the standard academic subjects, with a special focus on ethics and Islamic lessons, with 55% of its pupils being Muslim.

Norton, who herself grew up in Manenberg and matriculated from a high school in the area, said one of the keys to her school’s success was its emphasis on discipline.

“The students here know that regardless of what background they come from, when you come into this institution you must have respect. We also a a variety of upliftment programmes and courses at the school.”

A longer school day
“Our school day is a bit longer than most in the area. Every day we have a homework class until 5:30pm. The environment many of our students live in is so compact, many of them have to live out of bags and boxes. So they don’t have the physical space to do their homework and projects,” she said.

Last year, the school’s first group of matriculants achieved an 88% pass rate. One pupil, Aneesah Barends, got seven distinctions. Both of these achievements are unprecedented among schools in the Manenberg area.

Norton said there was still a number of crucial resources the school needed, like a library and computer and science labs.

“Finding donors can be very challenging so we also invite people to visit the school and see where they can assist – but its been tough. We also have limited resources, like any other school in Manenberg, with some better off than us because they get their resources from the government,” she said.

“In public schools there are so many policies [as well as] parent-run governing bodies, as required by the state. When the department closed the schools in the area because of gang violence, it was school as usual for us, with nearly a full attendance list. I strongly believe that children are safer inside the school grounds than at home.

Different to the others
“Many people look at independent schools as a business because it is very expensive. We are very different because unlike all the other schools in Manenberg, we don’t charge fees. There is a need for schools like this in poor areas, that provide good education,” she said.

The Leadership College also opened another branch in Mitchells Plain in 2011, and this year started a science school for girls in Observatory.

Class sizes at The Leadership College are typically 25 to 30. Nearby Silverstream Secondary averages 35 children in a class, though it used to be more.

Millicent Merton, a spokesperson for the Western Cape department of education, said the school “gives pupils a chance in life.” Merton said the main challenge at other schools in poor communities was overcrowded classes.

“We provide support to The Leadership College with management and governance, policy, the curriculum and finances,” Merton said.

Principals of the high schools in the area, Leslie Pieters of Silverstream and Shafiek Abrahams of Phoenix Secondary, both praised the independent school.

For the bright sparks
“It gives the bright sparks in the community the right attention they need. Our school has very different challenges because we have to accept all students. Some still struggle with reading and writing,” Pieters said.

However, South African Democratic Teachers Union deputy general Jonovan Rustin said if government and donors instead gave adequate resources to the other schools in the area, there would be no need for an independent school.

“Education should be the responsibility of the state. I don’t know enough about the school in Manenberg, but I don’t understand why the education department couldn’t give the resources to the schools already operating in the area,” he said.

Rustin said the high rates of unemployment, poverty and gang violence had a negative impact on the children in the area.

“The class sizes are also a problem because teachers don’t have the time and physically can’t give much attention to individual students. There is the difficulty in getting new teachers to come into the area, because of all the violence,” he said.

Rustin suggested that Manenberg become a pilot project where class sizes should be reduced and additional teachers assigned to the area.

Independent schooling for poorer communities
Equal Education’s Doron Isaacs, said, “There can be a legitimate debate about creating a ‘centre of excellence’ within a poor community. But it is clear that in this case the excellence is at least partly based on a carefully selected student body, already ahead by the time they come to school. Therefore you cannot draw conclusions for general policy from this one school.”

He said that while the school in Manenberg didn’t charge fees, most independent schools do charge fees and do not serve the public’s interest.

“Our intention is to encourage the expansion of independent schools that provide quality education to poor pupils. It will also increase access to schooling and the competition between private and public schools,” she said.