Zanu-PF hits at Mujuru’s support base 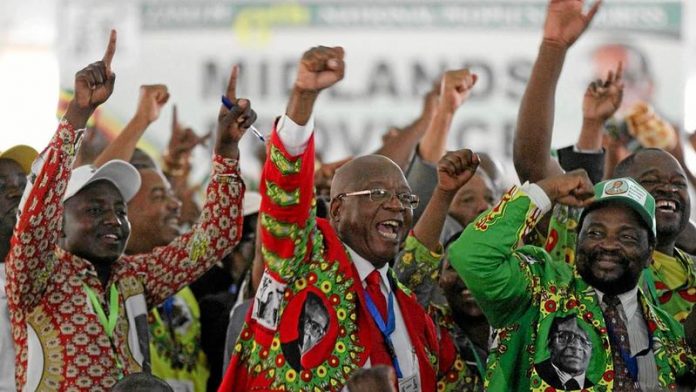 Zimbabwe’s ruling Zanu-PF party has begun a restructuring programme that insiders say is mainly aimed at destroying the last vestiges of support enjoyed by ousted vice-president Joice Mujuru, who remains popular in the party’s grassroots structures.

The exercise began last weekend and will cover the country’s 10 provinces.

Senior Zanu-PF officials, including members of the party’s highest decision-making body, the politburo, said the restructuring would result in Mujuru’s supporters being weeded out at the party’s lower levels and being replaced by officials known to be loyal to President Robert Mugabe.

Mujuru, who deputised for Mugabe in both the party and government for a decade, was replaced by her longtime opponent, Emmerson Mnangagwa, last December. She was fired from both positions for allegedly plotting to oust or assassinate Mugabe.

Many politburo members and ministers, among them Nicholas Goche, Sikhanyiso Ndlovu, Olivia Muchena and Dzikamai Mavhaire, met the same fate. In total, Mugabe dismissed Mujuru and 16 ministers and deputy ministers.

The purge also took place in the party’s provincial structures, where nine of 10 provincial chairpersons were dismissed.

But, with the 2018 general elections in mind, and as fears over the health of the increasingly fragile 91-year-old Mugabe mount, party hawks are taking no chances with Mujuru, hence the latest moves to cleanse the party of her support at cell, ward, district and provincial levels. “The restructuring exercise will result in the party being cleansed at all levels. Most of the Gamatox elements have been removed from the top, but we still have people at the lower levels of the party who are still loyal to Mujuru.

“We also have some who are not performing well, and these will fall by the wayside,” a politburo member said.

Gamatox is a toxic pesticide that was banned in Zimbabwe.

“The restructuring exercise will also assist us to determine our strength and help us to ascertain whether the party structures are in place and operating well. This is important considering that 2018 is not too far. By the time we hold the 2018 elections, we need to have a solid structure and, as a party, we need to be pulling in the same direction.

“It is, therefore, important for us to audit and mend our structures in time.”

Mujuru’s support base
There are fears among senior Zanu-PF officials that Mujuru may bounce back because of the support she still enjoys among ordinary members of the party. She also commands respect among security and army chiefs, mostly because of the influence of her late husband, General Solomon Mujuru, a former commander of the Zimbabwe National Army.

A clause in Zimbabwe’s new Constitution, which states that a “nominee” of the party can fill the vacancy of the president in the event that the president resigns, becomes incapacitated, or dies in office, has also made it imperative that Mujuru’s support base must be destroyed, according to Zanu-PF officials.

The clause opens the door for a succession race and many officials believe Mujuru, with her support base, remains a key factor.

“This provision means that neither Mnangagwa nor [the first lady] Grace [Mugabe] are assured of taking over, hence the renewed frenzy of purging those perceived to be Mujuru loyalists, because they may well nominate her,” a party source said.

“Mujuru is well aware that she still stands a chance as long as she remains in the party, which is why she has been careful not make any utterances or engage in any behaviour that might cause her to be expelled from Zanu-PF.”

Mujuru is now an ordinary member of the party.

The exercise has begun in the Matabeleland South, Bulawayo, Midlands and Harare provinces and will soon be extended to the remaining six.

Although the mission falls within the ambit of political commissar Saviour Kasukuwere’s office, politburo members themselves are leading teams to the provinces for the restructuring.

“I am aware that the Gamatox and its remnants within our party structures are trying to regroup in order to frustrate the restructuring exercise. But I am happy that the overwhelming majority of the party members are solidly behind President Mugabe, rendering the machinations of the Gamatox elements useless,” he said in an interview with the state media last week.

Zanu-PF officials also revealed that Mugabe, whose health has been a subject of media speculation for years, is becoming increasingly fragile. There is belief in the party that he will not be able to complete his term, which ends in 2018, hence the need to deal with Mujuru.

Mugabe has been making frequent trips to the Far East for health reasons, according to party and government sources. He left on another trip to Southeast Asia this week, barely a month after returning from Singapore, where he had a medical checkup.

He also reportedly underwent an operation in December while on his annual holiday, although his spokesperson, George Charamba, said he went to have his eyes checked.

Besides the restructuring, there are new cracks opening in Zanu-PF. Two camps are emerging, one led by Mnangagwa and the other loyal to Grace. Last year, the two camps joined hands to derail Mujuru.

But officials said there was growing mistrust between the former allies and, cognisant of Mugabe’s health problems and the need for them to position themselves strategically, they were seeking to outmanoeuvre each other.