Formula One: Even Arnie can’t mask the troubled start 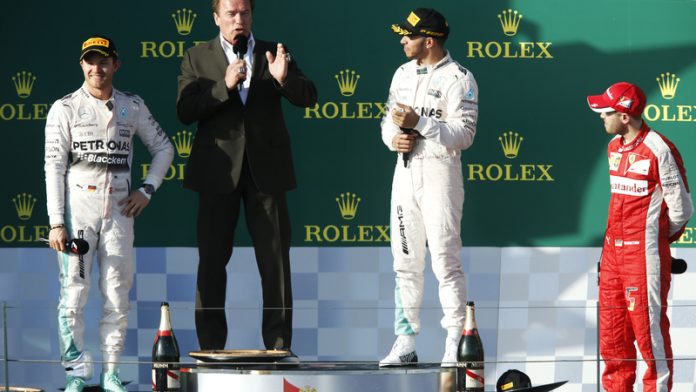 After several withdrawals and a processional one-two win for Mercedes, the Hollywood star’s surprise appearance at the podium ceremony provided a rare moment of cheer.

But even Schwarzenegger’s dazzling smile, and banter with winner Lewis Hamilton, couldn’t mask the problems facing F1 at the start of the new season.

With only 15 cars making it to the grid for the opening race, the fewest since 1963, questions are being asked about the complex hybrid engine technology which is giving many teams a headache.

New outfit Manor didn’t make it out of the garage, and Red Bull’s Daniil Kvyat and Kevin Magnussen (McLaren) dropped out with mechanical problems on the way to the start.

Max Verstappen, who became the sport’s youngest driver aged 17 years and 166 days, also had a bitter-sweet day when the Renault power unit in his Toro Rosso failed on the 34th lap.

Engine-supplier Honda’s struggles on their reunion with McLaren were underlined when Jenson Button was delighted just to finish the race, even in last place.

Red Bull’s Daniel Ricciardo echoed the assessment of many when he called the race, which Hamilton led from start to finish, “boring”.

“For sure it’s not great for the people,” said Ferrari’s Sebastien Vettel, commenting on the sparse field.

“(Formula One) is a difficult challenge. It is complicated – maybe it got a bit too complicated.”

Red Bull, dominant from 2010-2013, said they may even consider pulling out of the sport. Team principal Christian Horner called for new rules to rein in Mercedes.

“I fear the interest will wane,” Horner told reporters. “I didn’t see much of Mercedes on the television and I can only imagine that it isn’t interesting watching a procession so the producer was looking for other battles going on in the race – except there weren’t that many cars to look at.

“The highlight for me was Arnie Schwarzenegger on the podium.”

Vettel was accused of switching off fans in droves during his march to four world titles with Red Bull, and another lop-sided season will not help Formula One’s appeal.

And when told about the complaints, the response from Mercedes boss Toto Wolff was blunt.

“There is this wall in Jerusalem that you can stand in front of and complain. Maybe the guys should go there,” he said.

The problems look stark, but crisis is nothing new to a sport where drama behind the scenes often exceeds the spectacle on the track.

And like Schwarzenegger’s Terminator, it keeps coming back – starting with Malaysia in two weeks’ time. – AFP