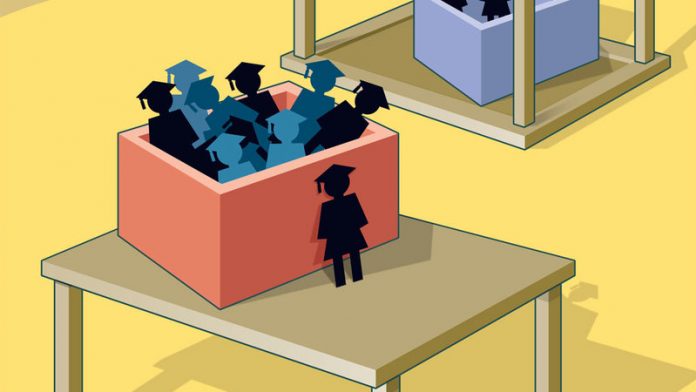 Is it implausible that “black” does not mean the same at every South African university?

One of the most significant changes in the country’s education system is that more and more black students have been enrolling in these universities each year since 1994. But the numbers enrolled differ enormously between institutions.

Take, for example, VUT and UCT. The government originally classified both as historically advantaged universities. But in the course of one year, 1998:

A revolution indeed in racial profiles – so radical a revolution that UCT had slid downwards from even its 1998 racial profile by 2013, but VUT had increased its black African enrolment to 96% of its student headcount by the same year.

In many debates on universities, the too-frequent absence of any class analysis in one focusing on race and equity, bedevils any radical demographic transformation of the whole higher education system.

At a public lecture VUT hosted on February 27 this year, Cooper made the point that the socioeconomic status of students is often totally ignored. Some students, when asked where their parents work, and whether they are perhaps lawyers or doctors, exclaim “No!” – as if such questions were wholly irrelevant.

But at UCT, the children of the new black African middle classes benefit from what South African society (generally) grades or assesses as “a top-quality university education”. Such universities attract parents and (usually) their children too; and, from the moment of enrolment at one of these institutions, they are perceived by society as “the crème de la crème”.

These parents often earn R1-million or more a year and can easily afford the fees that UCT and similarly expensive universities charge. Many black middle-class parents are themselves graduates of these universities.

Since 1994, changes in the classification framework of higher education have given us “top, established universities”, “comprehensive universities” (most of which became legal entities in 2004, the result of mergers between traditional universities and technikons) and “universities of technology”.

But these changes cannot hide some clearly visible facts: at the very top, we still have exactly the same historically advantaged universities and, at the bottom in this hierarchically perceived and experienced systemic structure, there remain historically disadvantaged and black universities – including the universities of technology.

“Black” and “equity” at these latter institutions do not mean the same as they do at UCT, Stellenbosch University or the University of Pretoria. For example, at VUT –which was previously “advantaged” but has become “disadvantaged” because it promoted the access of black students by charging among the lowest student fees in South Africa – nearly 80% of its black students come from poor households. Most of those within this 80% – that is, 57% – are from jobless households.

They are not working-class students: rather, they are part of “the precariat” – the term used by Guy Standing, professor of development studies at the School of Oriental and African Studies, University of London. (Precariat is the title of his book, released in its paperback version last year and subtitled The New Dangerous Class.)

They have fewer assets and little of the disposable income that people in most kinds of employment might have. Members of this “precariat” are vulnerable, divided and uncertain about their future. According to VUT’s “institutional strategic plan”, this means that fewer than 20% of its students are able to pay their fees, and the overwhelming majority are wholly dependent on the state’s National Student Financial Aid Scheme (NSFAS).

Worlds apart
Black students at UCT are worlds apart from black students at a poorer institution such as VUT. Ranking such institutions, whether nationally or internationally, is therefore ridiculous. Doing so fails to help us understand the social and economic matrices of these universities.

In fact, if we ranked all 26 universities’ race and class profiles, the tables would turn. The bottom would be on top and the top at the bottom of South Africa’s university system – an “education world turned upside down”, in other words.

UCT has the highest percentage of academic staff with doctorates – 66%, according to the higher education and training department’s report on universities’ research outputs in 2013.

VUT was second from the bottom: 13% of its staff had doctorates, the report recorded. And only 9% of the staff at Mangosuthu University of Technology, the last institution on the list, had this top academic qualification.

Universities that employ more academics with PhDs than others boast a higher number of graduates – and research outputs – than universities with fewer such academics. Together with the mass intakes of working-class and “precariat” students at the poorer institutions, this leads to pertinently different university-life experiences. Students at universities such as VUT are more likely to grapple with access to supervisors, teaching and learning, academic socialisation and support, among other difficulties.

Such institutions have the huge burden, but also the huge opportunity and responsibility, of enabling access and enriching university experiences for students. Early this year the minister of higher education and training, Blade Nzimande, conceded (yet again) that NSFAS does not have enough funds to support poor but academically deserving students.

This is not comforting news for poor and working-class students. It also unfairly shifts the responsibility for student access and success to universities themselves, many of which the government then leaves without adequate state support.

Pressing demands
Unlike UCT, VUT has a massive opportunity to serve those who have real and pressing demands such as accommodation, food, academic support and transport.

These are students Antonio Gramsci, the early 20th-century Italian Marxist theoretician and politician, would have classified as “subaltern” (literally, “beneath or subordinate to ‘the other’”) – a term and concept developed further by Gayatri Spivak, now a distinguished professor of the humanities at Columbia University in New York.

Such students must not be allowed to drop off the country’s transformation agenda.

Serving the precariat and working-class students has to be one of the central themes in the transformation template of universities such as VUT. Addressing the inextricable link between race and class, as it is evidenced through the varying socioeconomic statuses of black students in the higher education system, requires state funding to alleviate resource deficiencies.

This is not to say that those of UCT’s black students who come from poor families should not be supported, but rather that the bulk of funding must go to the institutions that have the most difficult job of transforming the lives of “subaltern” students.

We will never tackle the revolutionary changes the past has given us the task of making without also tackling the vexing realities of class and race – as opposed to neoliberal, capitalist notions of “global competitiveness”.

Once we are courageous enough to grab the bull by its horns and address the inseparability of race and class, we can then entertain the current methods of university rankings. At the moment, though, comparing universities that are worlds apart is like comparing apples and oranges.

Dr Bernadette Johnson is the executive director of research at the Vaal University of Technology. She is also the vice-president of the South African Higher Education Community Engagement Forum. Dr Mondli Hlatshwayo is a researcher in the University of Johannesburg’s Centre for Education Rights and Transformation