Africa’s opium is the religion of others 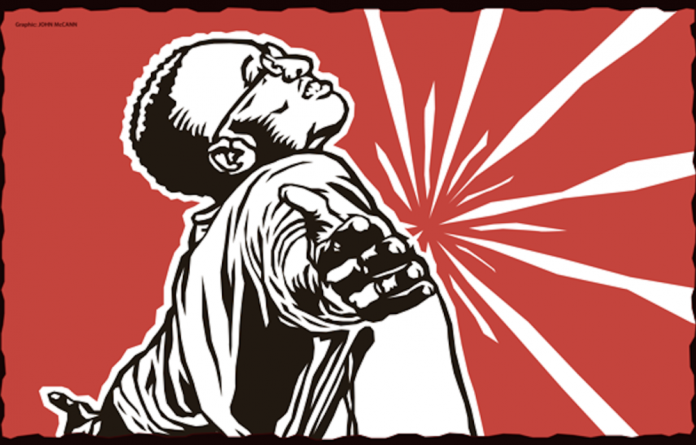 For much of this week, our roads will overflow with cars, buses and minibuses full of pilgrims en route to African Zions and Jerusalems. Many local rivers will become Jordans in which the recently converted will be born again. Country valleys will echo with songs of gratitude from wretched souls singing: “Jo, ke mohlolo ha ke ratwa le nna [what a miracle it is for someone like me to be loved].”

Innocent villagers will be battered with amplified sermons on loudspeakers in all manner of fake American accents. With their stomping feet, the dancing masses will convert ordinary mountains and hills into sacred spaces. And the goats will catch hell on several fronts – they will be slaughtered either in celebration or in libation.

For more than 170 years, Karl Marx’s brief reference to religion as the opium of the people has proved hard to forget and harder to forgive. He probably did not have Africa in mind when he made the statement, but nowhere is this Marxist “dictum” in sharper focus. This is the continent whose people respected scholar and academic John Mbiti’s described as “notoriously religious”.

Nothing captures the tragedy and the wonder of the African continent better than the coexistence of poverty and religiosity, both in their most extreme forms imaginable. The question is whether the coincidence is merely casual or causal – and in which direction. Are Africans poor because they are religious, religious because they are poor, or religious in spite of being poor?

Admittedly, there are a few Africans who have used religion to access power and wealth. Those who got rich out of religion range from slave traders to colonial land-grabbers and their offspring, from the well-heeled children of missionaries to independence and post-independence ruling elites who have amassed huge tracts of land for themselves and their progeny, as well as all manner of medical, psychological, spiritual and religious workers who sell expensive herbs, medicines, hopes and dreams to people who can hardly afford them. Apartheid was itself a religious ideology of dispossession based on the idea that whites in general, and Afrikaners in particular, were a chosen race.

Many of Africa’s recent experiences and expressions of religions – dominated by versions of Islam and Christianity – are extreme and painful. The recent wave of “Africa rising” sentiment, based on Africa’s economic potential on the one hand and its capacity for consumption on the other, is not innocent.

It is precisely Africa’s famed capacity for consumption that has led to the tragedy emanating from the realm of religion. For many years, Joseph Kony led a group of young killers called the Lord’s Resistance Army. The murderous activities of Boko Haram and al-Shabab in West and East Africa are not just military exploits but also expeditions in defence of particular religious visions.

In a recent book titled Of Africa, Wole Soyinka notes the extent to which African peoples and their indigenous religious experiences have been rendered invisible by imperial religions. Soyinka decries a world in which (religious) solutions must be sought only from two sources – and how Africa has tragically been caught up in this.

On Friday April 3, African Christians will commemorate the death of Christ, not just symbolically – many will literally die with and for him. They will die on the roads to worship places, they will die at voting stations, they will die in senseless border wars and they will die of preventable diseases and of hunger in an age of abundance.

Some will try to stay awake for the 72 hours between Good Friday and Easter Sunday. Some will have stopped eating for days (it’s called fasting), which is easy if there is not much food in the fridge – assuming there is a fridge. Many will use the weekend to undertake the medical consultation they have been postponing because they don’t have medical aid and they cannot afford a doctor’s fees. The religious prophet and the healer will be busy doubling up as general practitioners this weekend. Holy water and related paraphernalia will be the standard and repeated prescription. These, too, are for sale.

Chinua Achebe suggested that at the heart of the African predicament is the question of identity and African humanity. He is haunted by the double-negative doubt of Joseph Conrad’s character Mr Kurtz from Heart of Darkness as to whether Africans were human. “No, they were not inhuman. Well, you know that was the worst of it – this suspicion of their not being inhuman.”

This double negative of doubt becomes more vexing when appropriated by Africans themselves, so they affirm in church: “Jo, ke mohlolo ha ke ratwa le nna“. The same doubt is seen when Africans shun themselves, their skin, their hair, their lips and their hips. We neglect to appreciate the burden, the devastation and the struggles of inherited and imposed identities at our own peril. In education, religion and science, many look to Europe, the United States and other so-called developed countries for guidance. Just as in religion, many African universities are chasing the global standard everywhere except on the continent.

Surely a people saddled with such a pathology, born out of years of subjugation, humiliation, self-doubt and self-denigration are perfect candidates for the kinds of excesses we have witnessed in many societies, excesses attributable to the kind of drunkenness that comes with drinking liberally from the original opium fountain – religion.

“Religion is the sigh of the oppressed creature, the heart of a heartless world, and the soul of soulless conditions. It is the opium of the people,” said Marx. Could religion play a better or different role than that merely being a sigh, a soul and a heart in the continent whose autochthonous religions have been rendered invisible, muscled out by the religions of the gun, the pound, the euro and the dollar?

In his celebrated song When You Come Back, Vusi Mahlasela posits an Africa that gives something to the world and not just takes from it. That, I believe is the nub of the matter. In religion, as in science, politics and economics, education as in health, the question is: What is it that we as Africans have to offer to the world, instead of just taking from it?

Professor Tinyiko Maluleke teaches at the University of Pretoria