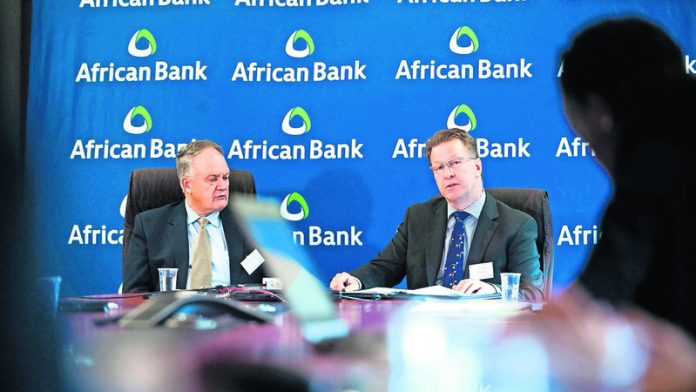 African Bank creditors are now firmly divided between those who can expect to get money out and those creditors who can’t, with the curator and the treasury trying to negotiate a deal that appeases both.

Agreement with tier two creditors must be reached in the next few weeks if curator Tom Winterboer hopes to meet his May deadline to provide details of the lender’s proposed restructuring.

African Bank, which was South Africa’s largest provider of unsecured loans to low-income earners, collapsed in August after saying that it would need at least R8.5-billion to survive, prompting stock to drop by 95% and bond prices by half.

Gill Marcus, then Reserve Bank governor, said embattled furniture store chain Ellerines had contributed to the bank’s collapse, having been a “significant drain on African Bank, requiring funding support of R70-million per month”.

Investec has found itself in the unenviable position of being both a senior creditor and a tier two or subordinate creditor.

Spirited challenge
A committee representing some of the holders of R4.4-billion second-tier debt – Investec Asset Management, Stanlib Asset Management and Prudential Investment Managers – has mounted a spirited challenge to the proposal that they be treated differently to senior credit holders, who are to be paid out 90% of their investment, whereas other investors will get very little or nothing.

In submissions to Parliament’s finance standing committee, which heard arguments from both creditors and the treasury in mid-March, second-tier creditors argued that the Banks Amendment Bill would “enable the curator to choose which creditors to honour”.

They are also objecting to amendments to the Bill that give the curator of African Bank the power to transfer assets and liabilities of the bank to the “good bank” without consulting the investors.

Senior creditors, holders of an estimated R44-billion debt, initially opposed the amendment that gave the curator what they believed was unfettered power, but were eventually talked around after the treasury said the Promotion of Administrative Justice Act would apply to any curator, protecting the right of creditors to be heard.

According to a submission to Parliament’s finance standing committee, these companies own 50% of the total debt of African Bank and so have a vested interest in the bank’s survival. It is estimated that 124 local collective investment schemes hold African Bank stock – both exchange traded funds and unit trusts.

Reasonably pragmatic
In the hearing before the finance standing committee on March 18, Tamara Burnell, on behalf of Old Mutual Specialised Finance, said it accepted that the Bill was a reasonably pragmatic middle ground, between trying to expedite the African Bank scenario and setting some key principles for future application. Though not perfect from their perspective, on balance the Bill could be supported as an interim piece of legislation.

In a quarterly announcement on Tuesday this week, prescribed in term of the JSE listing requirements, the board of African Bank and Winterboer said they continued to meet “affected creditors to progress towards restructuring of African Bank”.

The statement said Winterboer was working to finalise by April the publication of the audited results for the year ended September 30 2014. Winterboer and the board said, however, that they were unable to “give a date on which the suspension, in respect to all equity securities of the bank and all debt securities, is expected to be lifted”.

The four major banks, Investec and Capitec, as well as the Public Investment Corporation (PIC), have agreed to underwrite the capital raising for the good bank, which in August last year had a book value of R26-billion after impairments. The Government Employees Pension Fund, managed by PIC, has the most equity exposure to African Bank.

In a presentation to the finance standing committee in March, the treasury said the motivation for separating the good and the bad credit was to “allow continued market confidence and minimum disruption to the functioning of the financial sector”.

Mike Davis, a member of Nedbank’s group executive committee, said the banks and PIC had agreed to underwrite debt for African Bank on condition that a good bank was put in place. “There was a need to transfer from the assets and liabilities into the good bank,” he said.

Davis, who supports the intentions of the Bill, said: “Until the Bill is passed the curator is stuck. He cannot move forward with the restructured entity.” Davis, like other analysts approached, said unfortunately second-tier debt holders seeing a higher yield know their risk.

An analyst said the collapse of African Bank was playing out in the corporate bond market and the damage could be felt for some time to come. “The corporate bond market is completely frozen,” he said. “African Bank’s demise has made investors suspicious of this market, and has led to negative gossip about the health of other corporates.” He said some companies have chosen to sideline new listings as a result.