Leaders of the #Rhodes rebellion 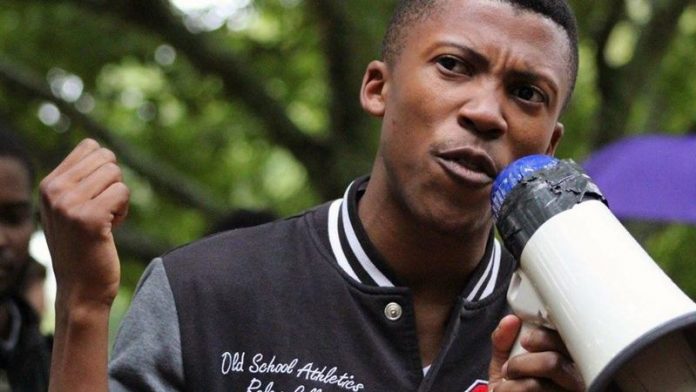 With an overwhelming vote for the removal of the Rhodes statue by the UCT’s senate last weekend, it is likely that the council will follow suit when they have the final say over the fate of the statue next week. This is a victory for the Rhodes Must Fall movement at the university and for all the students, organised into movements or not, who pledged their solidarity.

The Mail & Guardian spoke to students this week who said they were now grappling with how to destroy the ideology the statues represent.

For some, their paths to a more Afrocentric campus will be clearer than for others. Some are part of well-oiled, structured student movements. Others still need to mould the fledgling leadership at their universities into movements that go beyond rhetoric and hold their institutions to account. Administrative staff, lecturers and workers at some universities are as invested in the cause for transformation as students are.

At the University of the Witwatersrand, a group of students have compiled a 12?000-word document about what they think an African curriculum should look like.

But when the George V statue at UKZN was first defaced, no one claimed responsibility for this symbol of change. So how will these student movements, mature or not, ensure they get the change they are demanding?

The M&G asked one student from each of four universities to say what they think is unique about the protests and what their plans are to transform the fabric of their institutions.

“We’ve had conversations about transformation in lectures like anthropology and privately with our friends and lecturers but it was never transferred to a bigger platform. The Women’s Academic Solidarity Association had a talk about it. But no, it was still just whispers about transformation on campus.

So the difference between protests in the past to what has happened in the past month is massive because there were no protests about this at all in the past and now we have the vice-chancellor leaving meetings in Pretoria to come address our demands.

“After the stuff at UCT happened my comrades mobilised and we pledged solidarity. We spread it on social networks and people joined. Now we have about 500 members of the Black Student Movement. It’s amazing how quickly things escalated but we don’t have a leader, it’s just an open movement. Whenever there is an issue and we need to meet we do so. We organise it on Facebook.

There has been one march to the registrar, one where we were addressed by our vice-chancellor and the other was about transport money for students who can’t afford to go home in the holidays.

“We have a plan for the next few months, we have meetings. But we’re still … formulating it. We have documents and a vision. What we stand for is on our Facebook page. But we don’t just want a robust engagement about these issues either.

“We want to see the university take action in implementing these discussions, especially around curriculum transformation. We hope Rhodes will have said in public by the end of this year these are the dates and times for them to have changed the curriculum. We want to see their action plan.” 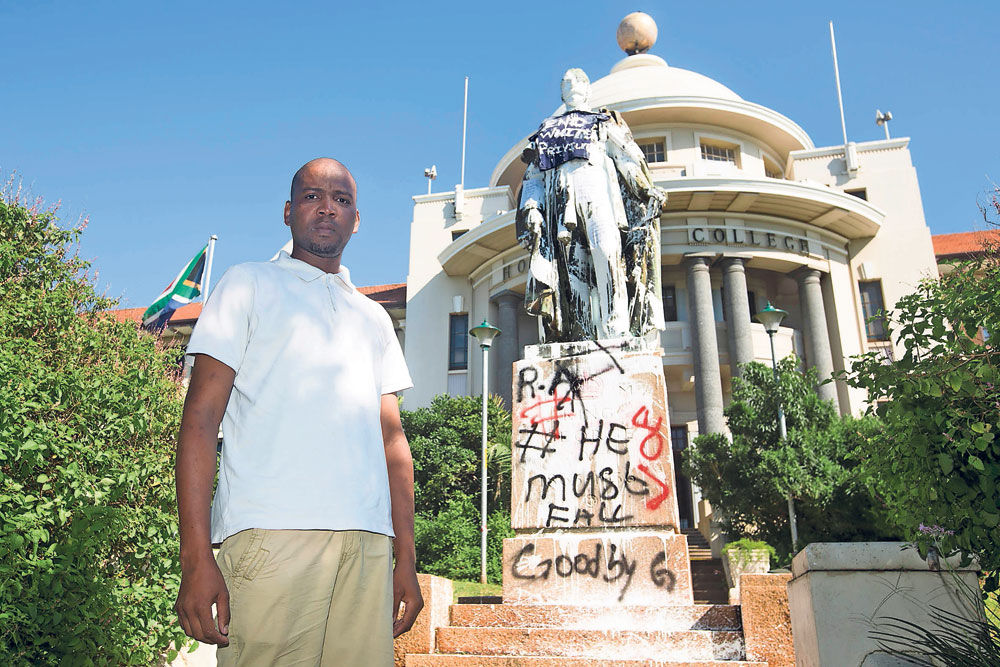 “Sasco is taking responsibility for defacing the statue but I wasn’t there when the paint was actually thrown on it. The only thing that was done over the past three years is that Sasco said it wasn’t seeing enough transformation and the university responded by establishing a renaming committee. UKZN is known for striking and every strike has raised issues of transformation and the syllabus but the campus is still not Afrocentric – look at the examples in our courses, and the case studies. It’s all about European life. You can’t apply them to your job when you eventually start working in South Africa.

“Now for the first time, after the George V statue was defaced, even white students were coming to us and saying we must mobilise. Even lecturers themselves have come to say this is a good initiative and we must be part of it. But transformation is not about Sasco. We want this issue to be led by students. Sasco can act as advisers.

“In the coming week we are going to have public lectures on campus. We are also looking at partnering with some government departments [in pushing transformation on campus] because government hasn’t done much so far to make people aware of this issue. We are going to get a spreadsheet of names of buildings and ask students to suggest name changes.

“Next year the curriculum will be changing and with the help of certain progressive lecturers and heads of school it will change to become Afrocentric. We have agreed that in the next four months we will be done with the thorough process of deciding how we want to change it.” 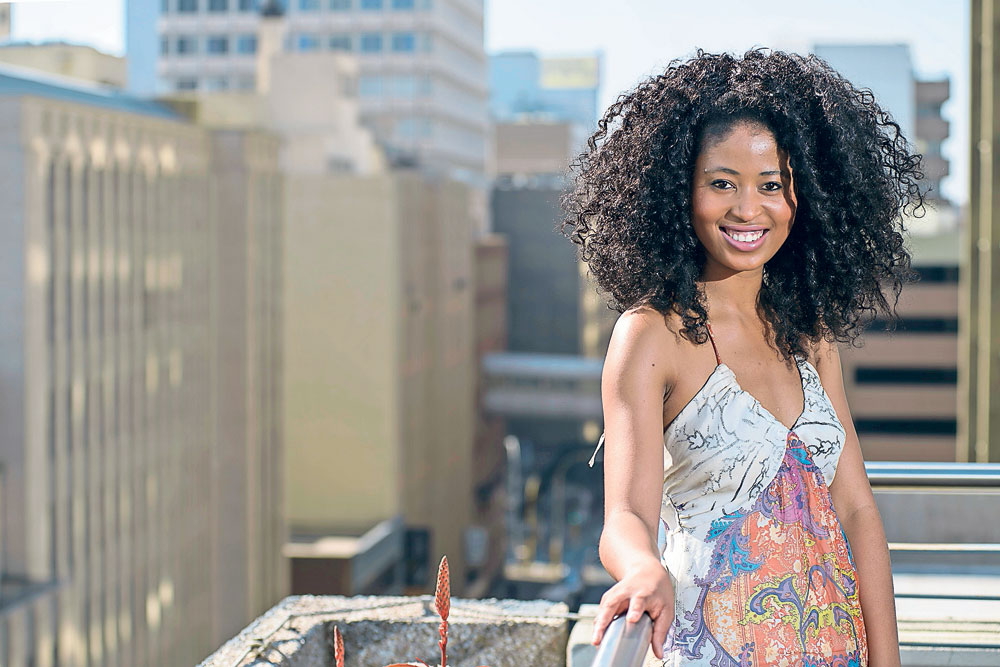 “The struggles I’ve seen at Wits have been struggles divided along socioeconomic lines. I’ve seen many students involved in struggles against financial exclusion and students with cars fighting for parking space. There were also black students fighting for the right to not have to use their names when submitting exam papers because they felt they were being discriminated against based on their race.

“What we are doing now is to merge. Our department [political science] had transformation workshops where, as students, we sat through the lecture interviews and gave our input. We went through course outlines and gave input on African theorists to include. We were not marching but we were sitting behind the tables and doing the work.

“But on the other hand, I was proud of what black academics did at UCT – they held seminars because they realised the need for intergenerational debate. Some lecturers at Rhodes have done the same, people like Nomalanga Mkhize and Siphokazi Magadla.

“The thing about Wits, UCT and Rhodes is that they are white supremacist by design. Black people were not allowed to teach or study there, they had to get permission from the government.

“But I don’t think the departmental problems are on the same levels. Some departments are trying to force transformation, which is why we called an institution-wide meeting to forge a deeper unity.

“There was one student from the philosophy department who said that she doesn’t see how Africans in an African society are being othered. A law student said they get given cases in Afrikaans to study, which was obviously an exclusionary measure. So it is institutional.” 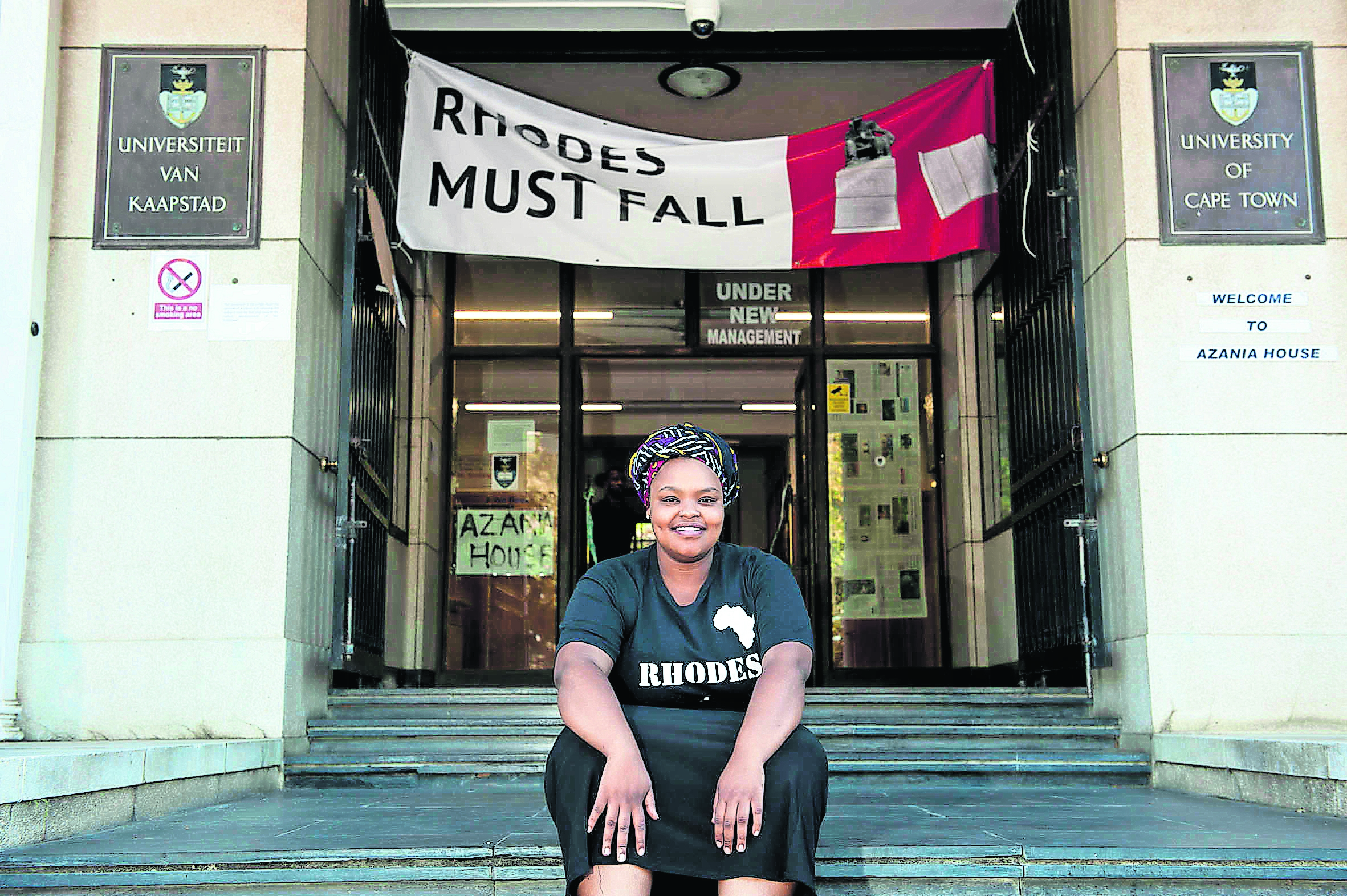 “We are regrouping and making an assessment about how all our struggles are interlinked as workers, as students and as academic and administrative staff and we are moving forward with a consolidated mandate from all parties involved. Previously, you had all these groups organising in isolation.

“What’s good is that we’re seeing things happening in Cape Town. Capetonians are moving the conversation beyond UCT and having it in the context of the city, around spatial divisions in the city centre and beyond, petty apartheid and so on.

“On campus, black academics have been coming on to the campus and having seminars all week. We are learning as much as we are teaching.

“Part of the discussions have been about really identifying issues so as not to come up with temporary solutions to permanent problems. The debates haven’t been easy but they are necessary to help us see things.