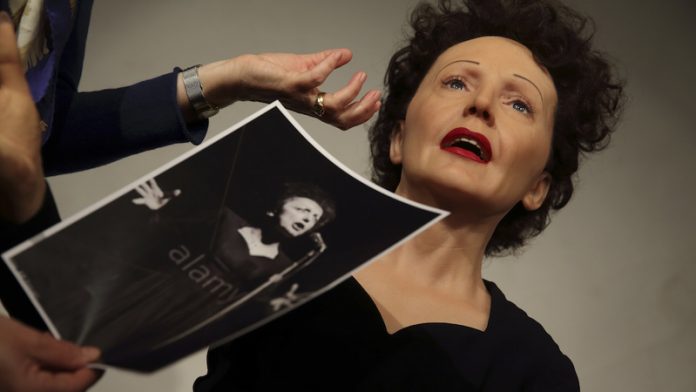 To the French, she was La Môme, the Little Sparrow who warbled her way off the streets of Paris and into international stardom. Edith Piaf had a song for every occasion, most of which mirrored the drama of her colourful life.

Je ne regrette rien, sang the cabaret singer raised by prostitutes in her grandmother’s Normandy brothel. When she died, the Roman Catholic church refused to officiate at her funeral because her lifestyle was deemed sinful, but the procession to the cemetery brought Paris to a standstill.

The 100th anniversary of the singer’s birth falls in December this year and her life and legacy is to be celebrated in an exhibition in Paris. The Bibliothèque Nationale de France has amassed more than 400 exhibits including photographs, song sheets, handwritten notes, posters – some of them never before seen by the public – as well as film excerpts and musical recordings aimed at reminding visitors of the role the cabaret singer played in French cultural history and collective memory.

In her signature black dress, she seduced audiences with La Vie en Rose, Hymne à l’amour and Milord, the ballad of a lower-class girl who develops a crush on an elegant British gentleman.

“The magic of Piaf is her repertoire that touches everyone,” said Joël Huthwohl, the head curator. “She sang simple songs with lovely melodies that spoke to everyone at those important moments in their lives.
“Also, the story of her life is fascinating and like a fairy tale; the poor, little girl born on the streets who became an international star.”

Piaf’s life was a classic rags to riches tale. Born Edith Giovanna Gassion on December 19, 1915 in a working-class district of Paris, her parents were travelling entertainers from a family of circus performers. Her father was an acrobat, her mother an Italian-born café singer and her maternal grandmother a flea trainer. While her parents continued their peripatetic life, Piaf is believed to have been left with her paternal grandmother who ran a brothel in Normandy.

In 1929, aged 14, Piaf joined her father performing on the streets and passing around a hat. She set out on her own three years later and, in 1935, was discovered by Parisian cabaret club owner Louis Leplée who nicknamed her La Môme Piaf (The Little Sparrow) and was responsible for launching her career.

Huthwohl said that, while Piaf’s popularity had endured in France, international interest in her life and loves was revived by the 2007 film La Vie en Rose, starring Marion Cotillard who won an Oscar for Best Actress for her portrayal of the singer.

“When she was alive, her image was that of a typical French woman who was much loved and, even when she became famous, had the image of being a woman of the people. Today her personality is still important but above all it is the songs, the melodies, that have endured,” Huthwohl said. “It’s the magic of the music.

“We wanted to show that the BNF is a place that has its part to play in remembering popular culture in France and not just great literature,” he added.

As a nod to current popular trends visitors will have access to a karaoke box where they can belt out their own version of her greatest hits.

Piaf’s adult life was as turbulent as her childhood. During the second world war, she gave concerts for the Nazi occupiers of Paris and was later accused of collaboration, but Piaf insisted she had been secretly working for the French Resistance and escaped punishment. After the war, her fame spread rapidly abroad as she toured Europe, South America and the United States.

She suffered three serious car crashes after 1951, which sparked a lifelong dependence on morphine and alcohol.

The singer married twice but her only child, a daughter called Marcelle, born when Piaf was only 17, died of meningitis aged two. Piaf also had several high-profile romances, but never completely got over the death of her married lover, the boxer Marcel Cerdan, in a plane crash in 1949 while he was en route from Paris to New York to meet her.

Piaf died of liver cancer in her villa on the French Riviera in October 1963 at the age of 47. The Archbishop of Paris refused to officiate at a funeral Mass saying Piaf had led a dissolute life, but her funeral procession drew tens of thousands of grieving fans. She is buried in the Père Lachaise cemetery.