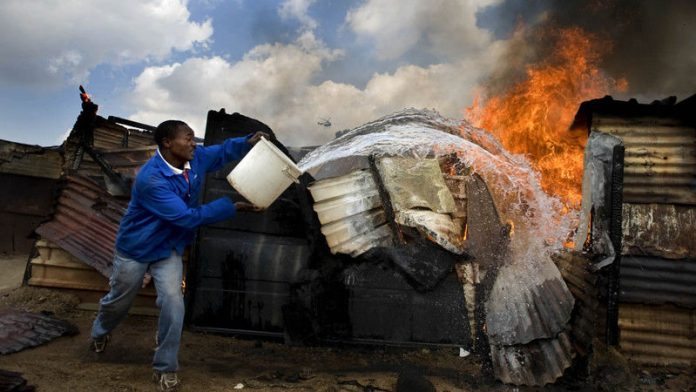 Home Affairs Minister Malusi Gigaba’s spokesperson Mayihlome Tshwete said the State Security Cluster is investigating messages circulating on social media, claiming that foreign nationals have been given several dates to leave townships and CBDs or they will come under attack.

Speaking to the Mail & Guardian, Tshwete said the messages have caused panic.

“In some areas people leave and they displace themselves because of what is being said. The messages have had a huge impact on foreign nationals and that has created fear.”  Over the past weeks, attacks on foreign nationals have been escalating in different parts of KwaZulu-Natal and Johannesburg.

Addressing reporters in Pretoria on Sunday, Gigaba issued a warning to perpetrators of xenophobic violence. He stated that they would face the full might of the law.

“We want to issue a stern warning to those who lend themselves to acts of public violence. We will find you and you will be dealt with to the full might of the law.”  Gigaba said more than 300 people have been arrested in relation to ongoing attacks on foreign nationals and looting.

False rumours
Gigaba said government is aware of false rumours spreading on social media platforms warning of attacks on foreign nationals. “They have been sending out fictitious SMS and WhatsApp messages with fictitious and photoshopped images warning people of imminent attacks.”

Gigaba condemned the messages and said some people are taking advantage of the attacks on foreign nationals.

Last week an Ethiopian street vendor in central Johannesburg told News24 that he received SMSes and WhatsApp messages warning that he and his countrymen faced attack.

“It seems that there are attacks planned for Johannesburg on Wednesday: CBD, Hillbrow, Berea and Yeoville. [On] Wednesday, Zulu people are coming to town starting from Market [street] their mission is to kill every foreigner on the road please pass this to all your contacts in case they come people should be on alert [sic],” it reads.

He said shop owners had opened their businesses in the morning, but after seeing people running up and down the streets they began closing again.

In a twist, State Security Minister David Mahlobo’s spokesperson Brian Dube, said: “It’s difficult to say at this stage (if there are specific investigations into social media instigation) because the National Joint Operations Centre (Natjoc) has been tasked with investigating all these issues. Natjoc will consider complaints and decide if they should be investigated, and will consider which national department the issue should be referred to.”

Dube said it was possible that some investigations might be referred back to the State Security Agency if Natjoc decided that SSA should assist in the investigation.

“We have seen different hashtags being used as a sign against xenophobia. They have been effective and many people are adding their voices.  I think 99% of South Africans are opposed to xenophobia.” Different marches are expected to take place this week against xenophobic attacks. – Additional reporting by News24.com