The structures that David Goldblatt values 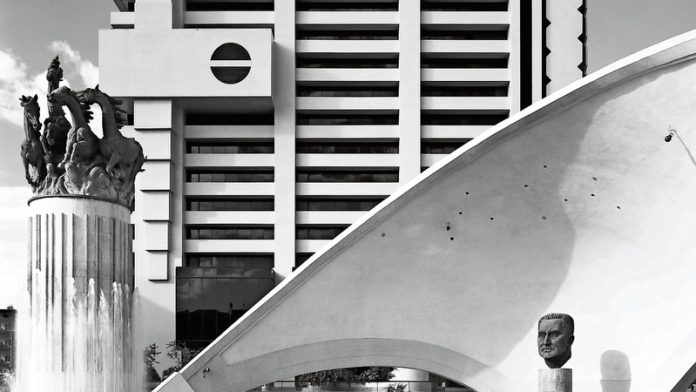 At his home in Johannesburg, photographer David Goldblatt discusses his recent work Structures of Dominion and Democracy – an update of his book of photographs taken between 1983 and 1993: South Africa: The Structure of Things Then.

“I’m now looking at what has emerged or what is beginning to emerge since the advent of democracy, in much the same way as I did before,” he tells me.

Old monuments are remarkably current of late and we discuss the moves by students to have statues like that of Cecil John Rhodes removed.

“I applaud the sudden awareness that lies behind this, that statues actually have significance. They are not simply blocks of stone, granite or whatever,” says Goldblatt.

“But I am totally opposed to the kind of direct action that was taken in Cape Town and now in other places. It precludes discussion and I think a democracy is based on the idea that when you have differences you can talk about it … it’s fundamental.”

Creating history
I question whether removing statues of people like Rhodes and other colonial- and apartheid-era figures, is not merely par for the course, but he is having none of it. “The fact that they were not democrats doesn’t in my opinion in any way minimise their importance historically.”

He points to the University of the Free State, where monuments like Willem Boshoff’s polished granite sculpture, Thinking Stone, were commissioned to try to heal divisions on campus. A photo of this is included in Goldblatt’s update to Structures.

“I think that’s the answer to Cecil John Rhodes if you like. It’s possible in sculpture, if that’s what we’re talking about, to have other things, to have other ways, other ideas, expressed and made concrete, or made manifest.”

His new work on structures is not just about democracy. “I’m looking at everything that I can. That I find significant,” he says. “It’s more about the way the history is being created, rather than their ethical basis. Their importance lies in telling the story itself, rather than their validity.”

“Each piece, if it was seriously made, has its own validity. And I think it’s very important to take cognisance of that validity if you like, or of what lies behind it and to respect it as the effort of somebody, somewhere, sometime to express that. And to grasp its meaning in the broader scheme of things.”

What is the value?
Goldblatt describes what he looks for in his photography. “I’m interested in the values, in human values,” he explains. “And embedded in these things are our values, or the values of the person who built it and used it. This to me is the significance of these structures in Dominion and Democracy.

“That students threw shit over Cecil John Rhodes is a very important and significant event. The significance lies in asking what ­values were they expressing in those actions. Get to grips with those and I think you’re beginning to understand some of the forces at work in this country.”

He then shows me one print from the original series, reflecting triumphalist monuments to the old republic in the modernist totalitarian style. The composition is dominated by former apartheid prime minister JG Strijdom’s grotesque disembodied head. In 2001, on the 40th anniversary of Republic Day, Strijdom’s bust fell through the floor to the parking garage below and shattered.

“There was no sabotage, two homeless people were slightly injured,” he recounts. When I ask whether it’s okay if a monument is toppled by an act of God, Goldblatt chuckles.