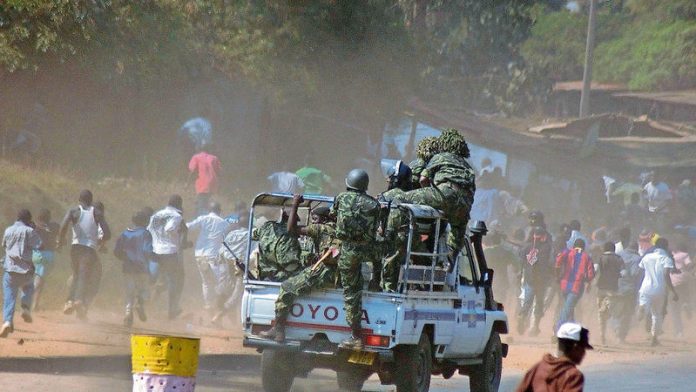 The Malawi Police Service has admitted that a growing number of its members are involved in serious organised crime – including armed robberies, car hijackings, break-ins and corruption – and that this is damaging citizens’ trust in the law-enforcement authorities.

Statistics from the national police headquarters show that 15 members of the police have been convicted this year and 70 others are on suspension pending investigations into criminal cases.

Police force members interviewed by amaBhungane this week said low salaries, a shortage of housing and the lack of trade union rights were fuelling the uniformed crime wave. In most cases, the culprits are badly paid constables and junior members.

Police arrested for robbery and theft
Two months ago, 10 members of the police were arrested in the central district of Salima for stealing government equipment, which included iron sheets and welding machines, from another government facility they were guarding.

That brought to 16 the number of police arrested for theft in that month alone.

On April 30, a court in Malawi’s northern district of Chitipa sentenced five policemen ranging in rank from sub-inspector to constable to 14 years’ imprisonment for robbing a businessman of K450000 (R11200) after they directed him to a lodge he was seeking and then beat him senseless with iron bars.

The presiding magistrate, Julius Kalambo, said the sentence was intended as a deterrent to other members of the police, who were supposed to protect life and property but had become a threat to society.

Malawi Police Service spokesperson Rhoda Manjolo said: “This is indeed a sad situation, but it is a small fraction of people who are denting the image of Malawi police.

“There are many decent officers; the problem is that people join the service with diverse backgrounds and hidden agendas. We will not relent in arresting them until we pluck out all rotten apples.”

Asked what drove members of the police to crime, Manjolo said it was a matter of upbringing. “Those people are committing the offences as individuals and not as police,” she said.

“That’s why we arrest them and dismiss them right away if found guilty.”

One of the policeman said he had a wife and two children, and was caring for two children of his brother who had died.

“Surely K45000 can’t be enough. I pay K10000 in rent and K7000 a month for a bag of maize. I also have to buy charcoal and other necessities and spend money on my daily transport to work. Life is tough, I can tell you.”

The other constable said the cost of housing was a contributing factor. Almost 90% of Malawi’s 10735 police rent houses because of the shortage of police accommodation.

“This puts the police officers in an awkward situation especially when they discover that their landlord or his sons are armed robbers. It’s difficult to turn against them. The tendency is to shield them or sometimes even join them,” he said.

He added that promotions and postings of serving officers to higher-paid jobs were largely based on one’s tribe or political affiliation.

“If you are a Tumbuka and your boss is also a Tumbuka, you are more likely to be promoted. The same applies if you support the ruling party.”

Malawi’s police ‘neglected’
Political and tribal cronyism are seen as contributing to dwindling professionalism, discipline and work ethic in the police force, ranked by Transparency International as Malawi’s most corrupt institution in 2013.

In the same year, a report by the United States’s Overseas Security Advisory Council found public support for the Malawi Police Service continued to drop because of corruption and the failure to deter crime.

The police interviewed also pointed a finger at their lack of union rights, which meant that grievances could not be channelled to the authorities.

They said that the police welfare committees were specific to particular stations and helped to raise money for members’ weddings and funerals but did not tackle pay increases and promotions.

They said their South African counterparts could join the South African Police Union or the Police and Prisons Civil Rights Union (Popcru), both of which had official bargaining rights.

The general secretary of the Malawi Congress of Trade Unions (MCTU), Pontius Kalichero, said three years ago the federation had tried to push for the establishment for similar unions in the Malawi police service.

“It is an open secret that our police remain neglected,” Kalichero said. “You look at their poor housing and poor salaries. Yet we expect them to guard our expensive lives and property.

“We felt a trade union could help police officers deliberate on such issues as salaries and this might change things for the better.

“It is difficult for officers to discuss salary issues through welfare committees.”

Spiritual and integrity unit helps guilty officers
The MCTU proposed two options, a union similar to Popcru or the incorporation of policemen into the civil service, which has bargaining rights.

“There was a positive reaction to that during the discussion but I don’t know where the issue is now,” said Kalichero.

Manjolo said police members who strayed from the straight and narrow were governed by the professional conduct unit and the spiritual and integrity unit.

“The professional conduct unit investigates complaints from members of the public against police officers and metes out punishment where necessary. The spiritual and integrity unit provides counselling services and spiritual guidance to officers guilty of misconduct,” she said.

The executive director of Malawi’s Centre for Human Rights and Rehabilitation, Timothy Mtambo, said the problem with internal units was that the police investigated themselves.

For this reason, the centre had championed the formation of a police complaints commission, an independent complaints body similar to South Africa’s Independent Police Investigative Directorate.

“We had our last consultative meeting with government and police authorities over the matter last July, but nothing is happening,” said Mtambo.

The principal secretary in the home affairs and internal security ministry, Benson Chisamile, told the local media that the groundwork for the formation of the commission had been concluded.

“They [police] have done the work … Possibly what has not been done is the launch [the commission] to start in earnest. But, in terms of the documentation and the like, all that has been done,” Chisamile said.

Manjolo contradicted him, and said the police had their doubts about it. “The matter is still under discussion, so it will be too early to comment,” she said.

During times of crisis, people turn to trusted sources for accurate information. This leaves them vulnerable to cybercriminals
Read more
Advertisting
Continue to the category
National