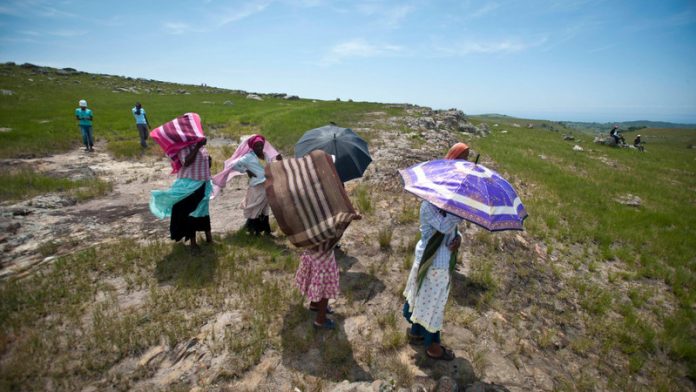 The latest upsurge of mining-related violence in Xolobeni on the Wild Coast has caused such consternation among residents that there have been calls for the local chief – who is accused of playing a divisive role in the conflict – to be removed.

The Xolobeni saga, which dates back several years, involves the proposed open-cast mining of titanium from a 22km stretch of ochre-coloured sand dunes in the Amadiba traditional area by Australian company Mineral Commodities (MRC). Should it go ahead, the mining would displace more than 200 households.

Chief Lunga Baleni, who according to customary law is supposed to play a mediating role in conflicts of this nature, is widely believed to be in the pocket of MRC, which has partnered with local company Transworld Energy and Minerals Resources (TEM). Residents say Baleni has been bribed with money and a four-wheel drive vehicle.

Baleni dismissed the claims, saying he earned his own income and could afford to buy his own vehicle. He said Sunday’s violence, which left three people injured during a confrontation when a convoy of vehicles chaperoning environmental impact assessors was blocked, was instigated by members of the Amadiba Crisis Committee (ACC), whose members oppose the mining.

Arrests
However, according to ACC member Nonhle Mbuthuma, there was no way that residents of Xolobeni would physically threaten armed men. Mbuthuma says the arm of an elderly woman was hacked, one man was grazed by a bullet and a third was pistol-whipped. According to police spokesperson Mlungisi Mathidane, two members of the convoy were arrested for discharging their firearms but no injuries were reported.

ACC member Mzamo Dlamini said four armed men were spotted on Monday night in the house of a supporter of the mining project. “Maybe they were pinpointing people to be targeted,” he said.

Baleni denied that he had absconded from chairing meetings since the arrival of his 4×4. “I am the chief and I have headmen who report to me. I am the one who calls meetings of the traditional council. If I’m not there, the headmen elect a chair,” he said.

Baleni said the regent of Xolobeni, Duduzile Baleni, had never approached him about the current upswing of violence. He denied claims that he was a director of Xolco, a local company that has partnered with MRC and TEM.

Opposition
Mbuthuma outlined the reasons why the residents of Xolobeni were against the proposed mining project. “We don’t want the mine because, first, an open-cast mine is very dusty and we’ll be affected by TB, asthma and other lung diseases,” she said. “We’ve been to Richards Bay where this type of mining is happening and observed the problems in that area.

“Second, we also have our fields there, which are our livelihood. Third, there are graves, as we have homes in the area. The assessors say they only see three graves but in one of the homesteads there are more than 20 graves.

Local residents have called for their chief to be removed.

“Fourth, we have livestock and they want to mine on our grazing fields. That mine is short term, projected for 25 years. After that we can’t return to our land or lives.”

Mbuthuma believes that the promise of jobs is not worth all that much because of the mechanised nature of open-cast mining.

“Those that are for this project are driven by the blind belief in jobs,” she said.

Give it a chance
Zamile Qunya, a cofounder of Xolco who was born and raised in Xolobeni, says residents of the area must at least allow the environmental impact assessment to go ahead for questions such as employment and sustainability to be determined.

“Once the impact studies are done, we can return to public participation so they can interact with the report and rebut it. But if you block specialists, you are not giving it a chance.

“All you have in the area is naked children asking for sweets, no water, no electricity, no clinics. It’s not a life that is being lived by people in a democratic society.”

Qunya said the dry-sand mining did not involve a lot of water and chemicals and would not result in excessive pollution. He said some of the members of ACC were employed in Xolco but fell out with the company at the instigation of “people who believe that poverty looks good to tourists. In other parts of the country, mining has coexisted with other industries like tourism,” he said.

MRC did not respond to questions from the Mail & Guardian.