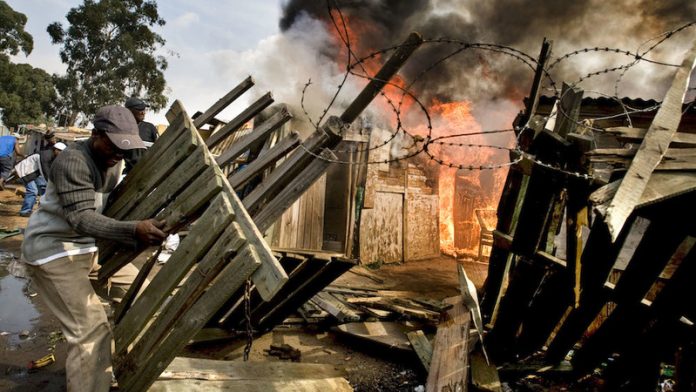 In late 2007, South Africa went into an electricity crunch and, after January 2008, into rolling load-shedding. Many mines closed down and a general sense of economic malaise descended.

In May 2008, there was a major xenophobic event. Riots started in Alexandra when migrants from Mozambique, Malawi and Zimbabwe were attacked. The violence spread to the Free State, Mpumalanga, North West, the southern Cape, other parts of Gauteng, Durban and Cape Town. Sixty-two people died, several hundred were injured, many immigrants left the country and much of the property of others was destroyed.

With eerie similarity, the country went into another electricity crunch in November 2014. The Majuba power station saw one of its coal storage silos collapse on the first day of the month. A second silo developed a major crack on November 20, causing further complications.

On December 5, Eskom started major stage three load-shedding. In the interim, load-shedding has become part of everyday life, with cautions from experts that it is to be with us for at least two years.

And now, again about five to six months after load-shedding started, we’ve had another major xenophobic event, with death, injury, looting, destruction of property, the army being deployed, migrants being evacuated and severe diplomatic fallout.

The link is perception about service delivery in general and, more particularly, that there are or are not enough resources in the country for all who live in it.

It is important at the outset to note that there is a fundamental difference between electricity and service delivery on other infrastructure, such as roads. A road can be good, bad or indifferent, can have few pot holes or many, shallow ones or deep. It can be hard to remember what it was like a year ago, two years, five years. There can be differences of opinion on how good service delivery is. A neglected road here is offset by a new road there.

But electricity is largely binary: it is on or off. When it is off, life pretty much stops for those who usually have it. In this respect, electricity is perhaps the keystone indicator of the health of government service delivery. When it fails, it immediately creates perceptions of a more general failure, and its binary nature means that it is very difficult to rationalise the shortcomings leading to its sudden absence. Electricity failure leads to hardship and discontent. Citizens can easily conclude that there isn’t enough for anyone, not just in electricity, but in resources more generally.

Very short leap
The very short cognitive leap from there to xenophobia and violence is obvious.

An investigation into reports on the 2008 incidents of xenophobic violence underline this thesis. The Human Sciences Research Council identified four broad causes for the violence:

• Group processes, including psychological categorisation processes that are nationalistic rather than superordinate;

• South African exceptionalism, or a feeling of superiority in relation to other Africans; and

• Exclusive citizenship, or a form of nationalism that excludes others.

Another report, Towards Tolerance, Law and Dignity: Addressing Violence against Foreign Nationals in South Africa, was commissioned by the International Organisation for Migration. A perception of poor service delivery was explicitly identified as a contributory factor.

There is a wide acceptance that “one cannot reason with a hungry man”. But hunger can be a broader concept: not perhaps hungry today, but fearing hunger tomorrow. Hunger for a better life, for hope, for a vision in terms of which the specific individual or group of people will be reasonably okay, along with everyone else.

The National Development Plan remains the only credible, holistic vision of a future South Africa that is premised on a better life for all. It is explicitly after a “walk together”, “win-win” outcome, in stark contrast to competing visions that implicitly assume that a “better life for all” isn’t feasible and that salvation is to be found in political power plays and policy directions that aim to ensure a better life for some, at the expense of others.

An acceptable life for all
A country in its quintessence needs a collective vision of an acceptable life for all that supports an emergent nationhood. In 1994, it was Nelson Mandela’s magnanimous vision of an inclusive South Africa that gradually transcends its past. Later on, it was embodied in the National Development Plan that at the very least created a scenario under which our most pressing problems could be overcome and people could hold hope for the future.

When service delivery is perceived as disappointing, doubts start to surface about whether that vision is perhaps just pie in the sky. When interest groups fail to fully endorse the vision or start vigorously to execute it – and instead bicker about its ideological merits – those doubts are strengthened into distrust.

And when the lights go off, for many it is the signal that the ship is indeed headed another way, that there isn’t enough for everyone and we need to look out for ourselves, and look after ourselves. Such a conviction ultimately leads to a breakdown of the social contract and would logically end in Thomas Hobbes’s bellum omnium contra omnes, “the war of all against all”. Xenophobia and outbreaks of violence would only be a special case of a situation in which each increasingly fends for themselves.

The good news is that much can be done to turn things around, both practically and symbolically. A continued, rapid roll-out of renewable energy would do much to alleviate the problem.

Already the minister of energy has announced that this is coming, with a ministerial determination of another 6 300MW in the offing – bigger than the ultimate Medupi, but all of it will come in less than half the time and some within 24 months.

The industry is able to counter-perform on this, with many projects ready to be built immediately.

It is fortuitous that the procurement rules for renewable energy stipulate that a percentage of turn-over needs to be invested in socioeconomic and enterprise development in the rural areas surrounding wind and solar farms.

From the ground up
These commitments already total more than R11-billion over the next 20 years. Thus, from the ground up, the renewable energy programme bolsters economic activity and resilience in rural areas and alleviates electricity scarcity. In the process it works to avoid generalisations about resource scarcity that can emanate from rolling load-shedding.

At the high level, however, it is critical that South Africa creates a vision of an acceptable future life for all that is sufficiently robust for people to believe in it. This would ease tensions between impoverished South Africans and immigrants, for the reason that the latter would be less likely to be seen as a threat to livelihoods.

As the only manifestation of such a vision, we urgently need to reinvigorate our National Development Plan.

Johan van den Berg is the chief executive of the South African Wind Energy Association. He writes in his personal capacity