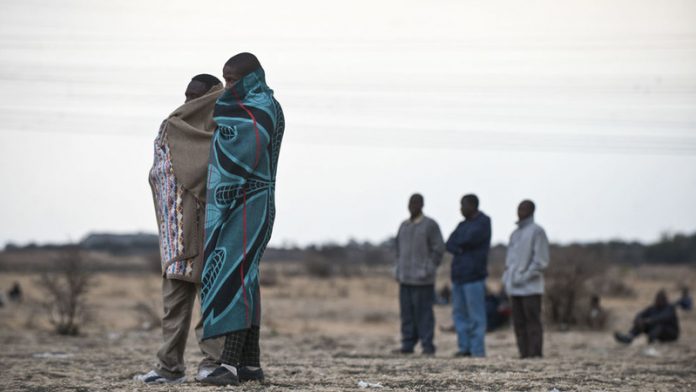 When there is any development relating to the Farlam Commission of Inquiry, cellphones start to buzz at the Lonmin platinum mine in the North West, where 44 people were killed in August 2012.

Word spreads fast with BlackBerry Messenger so that, within a remarkably short time, everyone – except mineworkers on underground shifts – knows the latest news.

For the past two weeks, though, the cellphones have brought nothing new about the commission.

“That Sunday when Zuma said he was going to release it now, I think 20 people messaged me to say ‘ke nako!‘ [it is time],” an underground worker said this week. “Then, no, nothing.”

On Sunday May 10 the presidency issued a statement, headlined “President Zuma to release Marikana report”. It spread like wildfire through a community that has been told for years to wait patiently for answers.

But what the statement actually said is the report would be released “in due course”.

‘We just wait’
The closest it came to a commitment was to quote Jacob Zuma as saying that “everything is being done to ensure that the matters are concluded as soon as possible”.

Variations on that theme are all that have been offered since.

“We don’t talk about it anymore,” said the platinum worker, who did not want to be identified. “What do you say now? We just wait.”

Tellingly, many of the workers at Marikana will speak frankly only when guaranteed anonymity. They fear that anything they say in public could lead to retaliation from any number of sources.

They name the police, their employers, their fellow workers, the families of workers killed in the massacre, the Association of Mineworkers and Construction Union and the National Union of Mineworkers, the government, the ANC and even, in one case, the Economic Freedom Fighters.

As long as the truth remains hidden, they say, “troublemakers” can be dealt with.

Freedom from fear
Many regard the report of the commission headed by retired Judge Ian Farlam as a saviour – as if its arrival will herald freedom from the constant fear of persecution.

But the saviour is slow in coming. At the time of publication, Zuma had held on to Farlam’s final report for 52 days, and the time was fast approaching when it would have taken one day of consideration and processing for every five days the commission sat.

The delay in the release of the report has led to speculation about the political implications for every­one, from Deputy President Cyril Ramaphosa (and his political rivals who are likely to challenge him for Zuma’s job) to the national police commissioner, Riah Phiyega (and her possible replacements should she lose her job, including her predecessor, Bheki Cele, who continues to hold much sway in the ANC).

There have also been mutterings about editing and political solutions to criminal problems.

For some of the miners the Mail & Guardian has spoken to, the matter is much simpler: they want a definitive, official pronouncement that their comrades were murdered, even if there is still debate about whether the murderers were the police who pulled the triggers, their commanders or their political superiors.

Any legal attempt to force Zuma to release the report will inevitably be slow, but the clock has started ticking.

Official demand
This week interested parties, grouped under the Marikana Support Campaign, submitted an official demand, under the Promotion of Access to Information Act (Paia), for access to the Farlam report.

The demand is being handled by the South African History Archives and the Right2Know campaign, two organisations with considerable experience in using that law to gain access to documents held by the government.

The high court, the Supreme Court of Appeal and the Constitutional Court have all been sympathetic to demands for the release of even sensitive information held by the government if it is in the public interest. But legal action has taken years to conclude.

South African law dating back to 1947 requires commissions to be held in public but it does not necessarily compel the report to be made public, and there is no limit to how long the presidency can take to release it.

But that argument has already been countered by Zuma’s statement that he does intend to release the report.

There may be another way to force the presidency’s hand, although there is no evidence that any party intends to use it, and it owes more to the realm of politics than law.

“What you could do is bring an application to say the refusal by government to release the report is irrational,” said an advocate who dabbles in political strategy for public interest litigation.

“I doubt that application would succeed, but what you would do is force the government to go on oath and explain why they are not releasing it.

“And what on earth are they going to say?”

The only time change has occurred in South Africa is in response to global events such as World War II. The country is once again facing such an event — Covid-19 — and will have to react
Read more
National

Experts disagree on the meaning behind carrying sticks during strike action, a debate that will be aired at the CCMA on Wednesday
Read more
Friday