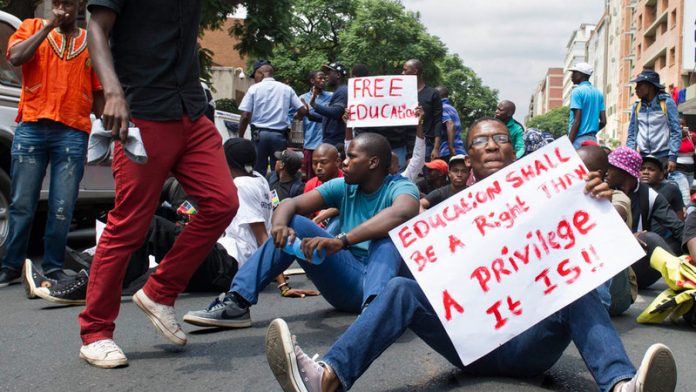 Graduation day is supposed to be a happy and grand affair. You walk, head held high, on to the stage in your Sunday best, shake the hand of the vice-chancellor and receive your certificate. Flashes blind you as the cameras capture your proudest moment.

For students at the University of Venda (Univen), this was an even more special day. Former deputy president Kgalema Motlanthe, in his capacity as chancellor of the university, was officiating at the graduation ceremony on May 14 and 15.

But several students were left shocked on graduation day. After the grand capping they were handed bills for outstanding debts on fees instead of their certificates.

The students, some after completing four-year degrees, are beneficiaries of the National Student Financial Aid Scheme (NSFAS). They were given letters showing that the state loan and bursary agency had not settled their fees with the Limpopo-based Univen.

Motlanthe was to award qualifications to 2?064 graduates. But many NSFAS beneficiaries received letters that read: “Please note that your certificate is withdrawn until such time you’re able to settle the outstanding balance.”

The shocked students established in subsequent days that NSFAS had not paid the university the full amounts they signed up for in 2014, their final year of study. Fees that should have been settled last year are still outstanding.

The Mail & Guardian has repeatedly reported how NSFAS, a scheme troubled by insufficient funds, leaves thousands of poor university students in the lurch because it has trouble paying their fees. Many drop out each year when universities won’t allow them to register because fees are still outstanding.

The Univen case is the first time at the country’s 26 universities that the NSFAS crisis has led to graduates not receiving their certificates.

Blade Nzimande, minister for higher education and training, has admitted the state loan scheme is failing to fund all university and college students who qualify for support. NSFAS needs R51-billion to meet demand for funding, but the national treasury allocated about R9-billion this year, citing a fiscus crunch.

Mahlodi Segokodi, who finished a bachelor of commerce degree specialising in business management at Univen, said she learnt that R5?000 of her R17?620 tuition fees for 2014 was still unpaid.

She has since pursued NSFAS about the matter: “They said I must send my [financial] statement. I sent the statement last month and I’m still waiting for their response.

“I need that degree [certificate] because it is not easy to apply for a job with just an academic record [which she later obtained from the university]. Potential employers want to see the real certificate.”

Bongani Mokoena, from Mpumalanga, completed an LLB degree at Univen, and said NSFAS owes the university about R40?000 for his 2013 and 2014 fees.

“It’s very hard because you cannot even find a job. How do you explain this situation where you only have an academic record saying you’ve completed [the degree], but you cannot provide a certificate,” Mokoena said.

Kedibone Mashatola, who has qualified for her international

relations degree, had almost R5?000 outstanding, yet her funding application had been fully approved by NSFAS.

“Many students didn’t get their certificates at the graduation ceremony. I didn’t get anything but just a blue letter saying I owe.”

But NSFAS told the M&G it has now solved the issue. Spokesperson Kagisho Mamabolo said: “We are aware of the problem at Univen and we have resolved it.”

He said the agency had discussed the matter with Univen prior to the graduation ceremony “and brought the 80-students matter forward so that they are able to graduate and get their certificates”.

The scheme paid R13.9-million of the R14.3-million that was owed to the Univen “well in time to allow the synchronisation and the reconciliation processes before graduation”, said Mamabolo.

Motlanthe said he would rather not comment and referred questions to the university.“It is not easy to apply for a job with just an academic record [which she later obtained from the university]. Potential employers want to see the real certificate”