South Africa seems to be losing its way 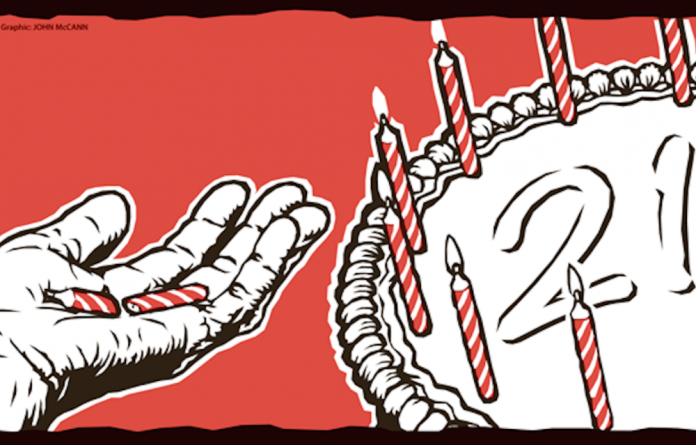 The “new” South Africa has turned 21. Many things happen at this age and beyond. In the case of human beings, for instance, the proverbial golden key is symbolically given to those who have reached maturity. By implication, one should take full charge of one’s destiny from this age onwards.

For South Africa the opposite seems to hold: instead of taking full charge of our destiny as a country, we seem to be losing our way even more than when we were in our teens. In this context a fundamental question arises: Why has inclusive development been elusive since 1994?

Development, simply put, involves socioeconomic progress or improvement in people’s wellbeing. Countries go through different stages of development. It is generally understood that development must involve people that need it; people must have choice for their livelihoods, as Amartya Sen has put it.

Similar to Sen’s “development as freedom” notion, Frantz Fanon conceptualised development as associated with socioeconomic freedom. Fanon goes a step further: he also approaches development from a psychosocial perspective, which would view the political independence South Africa is said to have attained in 1994 as a façade because the land, for instance, is still in the hands of the few, hence the inevitability of elusive development.

For South Africa, the debate about development also has to deal with social and economic inclusion. Viewed from this perspective, inclusive development has been shallow in postapartheid South Africa.

It is praiseworthy that the local economy stabilised from about 1996 to about 2006. But our economic performance has been pedestrian relative to many comparable countries such as Brazil, India, Malaysia and Botswana. And the local economy has performed below its potential – Nigeria recently overtook South Africa as the biggest economy in Africa. Among other issues, our economy is failing to create much-needed jobs.

The challenge of achieving inclusive development has been exacerbated by factors such as an unstable regulatory regime, labour demands, deindustrialisation and capital flight, among other obvious issues. A stable regulatory regime is a sine qua non for securing the confidence of local and foreign investors. But when there is unpredictability, as has been the experience in South Africa over the past few years, long-term planning and business projection suffer. This has implication for macroeconomic stability.

The frequent strikes by labour unions, especially in the mining sector, are perceived to affect productivity in the economy negatively. This has implications for the amount of money available for the state to pursue redistributive policies. Government’s failure to regulate movement of capital has major implications for achieving inclusive development. Liberalisation of the capital account and its effect on the balance of payments also predisposes multinational companies to take out money as they please, money that should be used to facilitate an inclusive economy.

To achieve inclusive development, it will be necessary for government to pay necessary attention to these variables, including the need for a robust and inclusive industrialisation programme.

If you look, for instance, at the various components of human development (education, healthcare and standard of living), life expectancy declined between 1990 and 2005 whereas gross national income per capita has not changed much since 2010.

Many perspectives of the national liberation movement inform postapartheid policies in South Africa. These include the 1943 Bill of Rights in the Africans’ Claims; the 1955 Freedom Charter; the 1962 Road to South African Freedom, a publication put out by the South African Communist Party; the 1992 Ready to Govern discussion document; the 1994 reconstruction and development programme; the 1998 State, Property and Social Transformation discussion paper; and the 1996 Constitution. Ready to Govern is probably the most important. If South Africa had stuck to its analysis, we would now probably have better social and economic outcomes.

The clarity of thought encapsulated in Ready to Govern implies that the society envisaged by the liberation movement could have been accomplished by now, or to a large extent, if its principles and policy propositions had been followed.

Another point worth considering is whether there could have been a change or shift in the thinking of the liberation movement at some point during the 1940s and the mid-1950s. For instance, the Africans’ Claims appears to have better understood colonialism and imperialism. Tanzanian author and academic Issa Shivji has explained how devastating colonialism and imperialism were in the African continent and how we should be cognisant of that when we examine development in Africa.

The Freedom Charter, on the other hand, seems to downplay the negative impact of colonialism and imperialism by giving precedence to nonracialism, for instance. Another related point is that there might have been a departure from Ready to Govern after 1994. It would seem that aspects of it were rescued in the 2007 Strategy and Tactics discussion documents but, arguably, there has not been any follow-through.

Some scholars have argued that part of the challenge South Africa faces has to do with the political transition: Patrick Bond, Hein Marais and Sampie Terreblanche talk of the “elite” transition.

In the main, the postapartheid development experience has to be understood in the context of our transition from an apartheid to a postapartheid or democratic society.

Many compromises were made that do not allow our society to move forward faster. There are some scholars (see recent books by Adam Habib and Gillian Hart) who argue that South Africa needs a new political settlement. I do not think that a new social pact is feasible yet if one looks at issues such as cohesion and the functioning of the ruling party.

My last point is that a new vision for South Africa’s political economy is overdue: the National Development Plan could have been about a new vision for the economy, rather than a long list of issues, priorities and debatable targets.

The historical experience of apartheid-colonialism and its ramifications should be informing policies that postapartheid South Africa pursues so that it can ultimately become the “nation” that many sacrificed their lives for. Otherwise, there appears to be a new, equally unsustainable compromise: a compromise between African majority rule and the white minority who hold greater economic power.

Given the socioeconomic exclusion characterising postapartheid South Africa and the high levels of racial inequality, inclusive development continues to elude the country.

The fundamental constraint to inclusive development has to do, largely, with policy paralysis. Notwithstanding the challenges imposed by the current global sociopolitical and economic order, if South Africa had implemented effective socioeconomic development policies it would have had a better development record than is the case.

As Mabogo More, applying a Fanonian perspective, puts it: “Decolonisation entails the reappropriation and return of national territory to its original indigenous people and freedom from [an] oppressive regime. Without decolonisation in the form of land reparations, reconciliation is impossible.”

Viewed through Fanonian lenses, development has actually not even started in South Africa.

The Covid-19 pandemic provides a chance to reflect on, reimagine and reset the global economic system
Read more
Opinion

A statue of the French king in Louisville, Kentucky was damaged during the protests against police killings. It should not be repaired
Read more
Opinion

Target poor populations with meaningful measures other than lockdown

Low and no-income people are the hardest hit by Covid-19. Isolation is near impossible in places like townships. Rather lift them out of poverty
Read more
Coronavirus

South Africa’s military is not suited for the fight against Covid-19. Here’s why

SANDF has been trained and equipped for precisely the opposite of what President Cyril Ramaphosa has asked of it – to save lives. Its purpose is to defend the country and its people against physical, external enemies – by killing such enemies if need be
Read more
Advertising
Continue to the category
Coronavirus