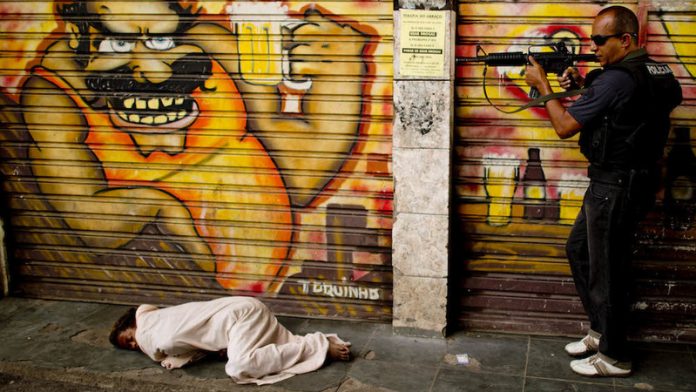 Last July, Patricia fatally stabbed a female relative of her then-partner in a confrontation, provoked by what she described as continuous, poisonous innuendo. “I couldn’t stand it any more,” she said. “I took the life of another person.”

A heated debate over whether teenagers who commit violent crimes can be rehabilitated, or should be tried as adults and incarcerated in the country’s packed and dangerous prisons, has split Brazil. High-profile violent crimes involving adolescents have inflamed the issue and polarised opinion over a controversial measure in Congress to lower the age of criminal responsibility from 18 to 16. A vote is planned this month.

Elisa Rodrigues, the director of the Aldaci Barbosa Mota youth detention centre in Fortaleza where Patricia is jailed, said the teenager understood the damage she had caused and was suffering because of the separation from her two-year-old son, Nicolas. “The person she killed had a serious involvement in drugs,” Rodrigues said.

Although economic growth in Ceará, a state in Brazil’s northeast, outperforms that of the country as a whole, murder rates in its capital Fortaleza more than doubled in the 10 years ending in 2012, reaching 76.8 per 100 000 people, according to the Violence Map produced by the Latin American Faculty of Social Sciences. Fortaleza was listed as the eighth-most violent city in the world in 2014 in a report by Security, Justice and Peace, a Mexican nongovernmental organisation.

Under current Brazilian law, teenage offenders like Patricia are detained for a maximum of three years at educational centres to be resocialised. “No one can change what has passed. But I can change my tomorrow,” said Patricia, now 18, who takes academic, beauty and dance classes. “I can become a better person.”

In an April poll by the Datafolha polling institute, 87% of respondents supported the proposal to reduce the age of criminal majority. Pepper spray was used on protesters demonstrating against it in Congress last week.

“Our primitive leftists think that murder is the eve of redemption,” the right-wing columnist Reinaldo Azevedo wrote in the Folha de S Paulo newspaper.

Opponents counter that throwing teenagers into Brazil’s notoriously brutal and overcrowded adult prisons, where criminal gangs rule, riots are common and decapitations are not unheard of, is no solution – even if convicted adolescents serve time in separate prisons or units.

“Reducing the age of penal majority will not resolve the problem of juvenile delinquency,” President Dilma Rousseff wrote on her Facebook page in April. Her government may support a counterproposal to increase the maximum adolescent detention to 10 years.

Street patrol in groups of four
Black-clad police Swat teams patrol Fortaleza streets in groups of four: three ride motorbikes, and one with an automatic rifle rides on the back of one of them. On a recent afternoon, they arrested two teenage boys on a motorbike who had just held up a motorcycle shop.

The battered .38-calibre revolver used in the hold-up was dropped on to Officer Rachel Moreira’s desk at the city’s Child and Adolescent Police Station. “The most everyday infractions are robberies with the use of weapons,” she said, locking it in a filing cabinet.

She said that reducing the penal age alone would not have an impact on crime levels and that wider changes to the law were needed. “These people of 16, 17 years are aware of the crime,” her deputy, Officer Emerson de Sousa, who supports the age reduction, countered. Soldier Xavier, one of the arresting officers, said that more education, not reduction, was needed.

In Ceará, about 31% of violent crimes are committed by adolescents, the Folha de S Paulo calculated from state government figures. “The motivation is drugs,” said Manuel Clístenes, the chief judge at Fortaleza’s childhood and juvenile court.

Brazil’s crack cocaine epidemic has hit Fortaleza hard. Marijuana is cheap and widely used. Adulterated cocaine has flooded poorer neighbourhoods. Offenders are generally from the lowest social classes. “There is always the criteria of [abandonment]. Rarely does an individual come who has a mother and father from the middle class,” Clístenes said.

Casa do Menor is a nongovernmental organisation that houses teenage boys with drug problems in one of its centres in Ceará. Pablo (12) was its only resident on a recent morning. He said his mother, a crack addict, had died with a “lung full of ashes, sick”. She was also pregnant.

“The majority of my family is of this world,” he said. “For someone to enter is easy: you can go in, you can buy drugs. But to get out? You stay.” Pablo has lived on the street, dealt drugs and used a knife and a gun in assaults at a Fortaleza beach. Now he wants to clean up. “I cried when I came here,” he said. “Everyone received me well.”

The Reverend Renato Chiera, an Italian priest, founded Casa do Menor in Nova Iguaçu, near Rio de Janeiro, in 1986 to shelter local homeless children threatened by vigilantes. Adolescents like Pablo needed psychological and spiritual treatment, Cheira said, not jail. “The narco-traffic has become the refuge for these kids,” he said.

Rehabilitation is long and difficult
But rehabilitating teenage drug users is a long, difficult process. In April, the centre’s other five residents escaped to buy crack, cocaine and marijuana. They attacked a bus using weapons they had fashioned out of metal and wire. Afterwards, they sought out one of the centre’s workers, frightened about the consequences of what they had done.

Four are back with their families. The fifth was killed by a dealer.

Clístenes advocated changes in the law applying to children and teenagers, with longer detention for serious crimes and older and repeat offenders.

In a letter to congressional leaders and Rousseff, Human Rights Watch said reducing the age of criminal majority would violate international treaties signed by Brazil, such as the UN Convention on the Rights of the Child. The letter quoted a United States justice department bulletin citing research suggesting that trying teenagers as adults in the US had led to higher levels of reoffending.

“The solution is not to send them to adult prison,” said Maria Laura Canineu, Human Rights Watch’s Brazil director. “This will give them a certificate in crime.”

On a recent afternoon, 187 boys were locked in their cells at Fortaleza’s São Miguel educational centre, which has a capacity for 60. Cells with concrete beds for four housed up to a dozen on grubby mattresses on the floor.

Inmates shared more stories of the violence sweeping Brazilian society – an armed mugging, a knifing death, which the perpetrator said was in self-defence.

According to government estimates, fewer than 8% of Brazil’s homicides are solved – a fundamental problem that reducing the age of criminal majority is unlikely to change. – © Guardian News & Media 2015