Tsipras under pressure to cede as Greece misses IMF payment 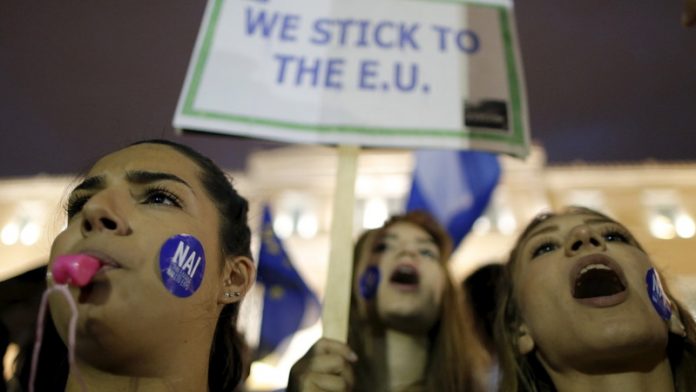 With Greek society feeling the pain of rationed bank withdrawals and pensions, the government is looking for a way out of economic ruin after a bailout expired and the country joined delinquent Sudan and Zimbabwe in being in arrears to the global lender of last resort.

An 11th-hour request for a new two-year rescue package to tide over a ravaged economy was sternly dismissed by German Chancellor Angela Merkel. With Greece’s stay in the euro club at stake, finance ministers in the 19-nation bloc are scrambling for a solution to pull Greece away from the precipice after more than five years of crisis fighting and two bailouts.

While Tsipras has framed the July 5 referendum on budget cuts to be a vote against austerity, economists and policy makers view it as a decision on remaining in the euro. The outcome could determine whether the European Central Bank pulls a financial lifeline keeping the economy on life support.

Merkel said there was “absolutely nothing” to talk about before Sunday.

Still talking?
Nevertheless, there are tentative signs of a thaw as euro- area finance ministers decide to take up Greece’s new aid bid for the second time at 11.30am Brussels time on Wednesday. At first glance, a plan devoid of any economic-reform measures appeared to be a non-starter, according to three officials with knowledge of the first call on the proposal that took place Tuesday.

“The request from Greece appears designed to keep the region somewhat off-balance, and to create the impression that Tsipras is searching for an imaginative solution,” said Malcolm Barr, an economist at JPMorgan Chase Bank in London. “Any deal struck at this stage is going to be on the Eurogroup’s terms.”

In an effort to give talks traction, Greece has agreed to offer more information and said it might change its referendum terms and recommendation, according to an official speaking on condition of anonymity.

‘Little Choice’
“With no fundamental change in the institutions’ offer, Tsipras will have little choice than to maintain his support for a ‘No’ vote, as he announced last Friday,” analysts at Barclays wrote in a note to investors. “This has become even more important, since he publicly declared that he would resign in case of a ‘Yes’ vote. The referendum is thus now about euro membership and Tsipras’s future.”

In Washington, the IMF is digesting what is the biggest missed payment since the institution was created during World War II. Its board will decide whether to grant a Greek request for an extension, something Montanino doesn’t think is likely.

For now, at least, markets suggest investors are confident policy-makers are containing the damage. The euro is trading at $1.114, about the same as before negotiations collapsed on June 26. Bonds rose on Tuesday in Spain, Portugal and Italy, which sold 6.8-billion euros of debt on Tuesday. In Asian trading Wednesday, the MSCI Asia Pacific Index gained for a second day, adding 0.4% at 12.30pm in Hong Kong.

Back in Greece – where citizens are limited to 60 euros a day of withdrawals – the stress of living under financial quarantine is beginning to show. Two pensioners came to blows on a bus returning from the beach to Athens Tuesday morning over who is to blame for the crisis. – Bloomberg.

South Sudan has nearly run out of foreign currency – and this is just the tip of a much bigger economic crisis.
Read more
Environment

COMMENT: Developing countries face a debt crisis that will only become worse as the Covid-19 pandemic continues, and massive debt relief will inevitably be necessary. The only question is whether it will be designed to address the even larger climate crisis
Read more
Africa

His road to the presidency was anchored in contention and acrimony, and if his bid is successful, Alassane Ouattara will have ruled for two decades when all is said and done.
Read more
Business