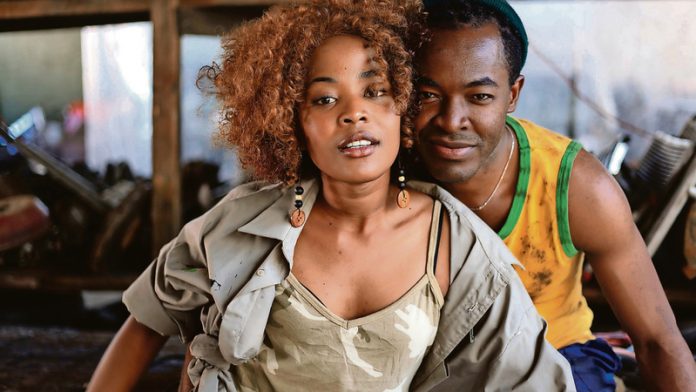 Director Sara Blecher explains that she is feeling a little jet-lagged. She has just returned from Los Angeles where her new film Ayanda was screened at a sold-out world premiere at the LA Film Festival.

She hasn’t returned home to Johannesburg empty-handed: the film received a special mention from the world fiction jury and left a trail of glowing praise in the international press for the film’s youthful urban feel.

Off to an illustrious start, Ayanda will make its home-ground debut opening the Durban International Film Festival (Diff) on July 16.

The film narrates the eponymous protagonist’s coming of age. Played by Fulu Mugovhani, Ayanda is a lively 21-year-old hipster who fights to keep her late father’s auto repair shop, despite the looming threat of some dark family secrets. She is upstaged only by the dynamic Johannesburg neighbourhood of Yeoville, where the story is set.

This is not the first time one of Blecher’s films has secured the coveted billing of opening the Durban festival; Otelo Burning took the slot in 2011.

Otelo Burning, the story of aspirant surfers from Lamontville during the turbulent 1980s, saw a disappointing theatrical release in South Africa but went on to win favour at many international festivals, with successful runs in London and New York, pointing to the importance of expanding the local film market.

Ayanda appears set for international success, but broad local appeal is a clear intention, says coproducer Terry Pheto: “Ayanda celebrates the diversity of our country and revels in the fact that we are a multicultural, colourful and exciting melting pot of Africa. With this film we have tried to capture the Afropolitan nature of our country and the energy of its people.”

Pedro Pimenta, director of the Durban festival, agrees. “The opening film of this, the most prestigious international film event in South Africa, needs to reflect a clear priority established by the festival to reach and develop local audiences. By once again opening the Diff with a strong South African film, we endorse this objective.”

Reinventing the meaning of Africa
Blecher is thrilled about the opportunity, humbly noting: “If someone had said, ‘What is your dream for this film?’ I would say, ‘To open Diff’. For me, there couldn’t be a bigger honour. I’d rather open at Diff than play at Cannes. It’s where I feel you’re really talking to the correct audience and to other South African filmmakers – affecting the growth of the industry.

“The whole point of Ayanda is to show that there is a whole new urban Africa in which people are reinventing what Africa means – wanting to be both African and part of the global community.”

Although the film is certainly a tribute to contemporary urban culture in Johannesburg, Blecher doesn’t intend it to be merely superficial viewing. She is firm that it also exists to challenge stereotypes among South African audiences – especially those relating to gender.

Blecher cites, as an example, encountering the problem of whether Ayanda ought to remove her wig in an intimate scene with the film’s love interest, David, played by Nigerian actor, OC Ukeje, and plugs into the discussions about female self-expression echoed around the world.

“I can’t even describe how controversial that scene was,” says Blecher. “The response to it is absolutely divided along gender lines. On set, all the women were saying, ‘Of course she has to take it off. She’d never have sex wearing a wig – she’d wake up with it lying next to her.’ And the men were saying, ‘She can’t take off her wig because suddenly she’s not sexy anymore’.?”

Actor Viola Davis recently described experiencing a similar hair-related quandary while shooting the United States TV show How to Get Away with Murder. Confronting conceptions of gender in South Africa is personally important to Blecher, who is honest about her primary motivation for creating this particular film – her daughter.

Coming of age
“I wanted to create a strong female role model for young girls, who can be seen on a big screen, and make it possible to be someone who is grappling with oneself and wanting to be successful, but also be dealing with one’s own issues.”

So while Otelo Burning was quite specifically about masculine youth, Ayanda is a clear refocusing of her lens on burgeoning womanhood. Ayanda moves from whimsical “manic-pixie-dream-girl” to determined, spirited woman who has both shortcomings and redeeming qualities – a refreshingly complex female character, free to be imperfect without condemnation. Blecher is quick to attribute a significant part of this complexity to Mugovhani’s performance.

“We are so lucky to have found Fulu. I can’t say too many good things about her. She’s absolutely beautiful. She’ll say that Ayanda is not herself, but there is so much of Ayanda that is herself. She’s so fresh and original and honest. Her journey through the film is the film, and I am so happy to be able to present it.”

With the ambition of adding a third dimension to female characters in South African media, Blecher also points to her own development as a director, saying: “Maybe I’ve even been partly responsible for this, but South African films have so many car chases – so much masculinity – in them, that it’s so nice to make a film without guns and gangsters. This is another part of life which, I think, is in many ways more interesting than the violence we keep portraying.”

Her depiction of a vibrant and kaleidoscopically pan-African community, making use of a playful film-within-a-film device as a counterpoint to intolerance, is particularly poignant in light of the recent wave of xenophobic violence in South Africa. Adopting a deliberately optimistic point of view, she explains how she crafted the narrative to exist on two levels.

“There’s Ayanda’s story, and then there’s a very conscious portrait of Yeoville, because Yeoville is fascinating. You know, during the 2008 xenophobic violence, it was the one place where millions of foreigners lived but there wasn’t really violence – which is extraordinary. And I think that the two things exist simultaneously.”

Showing off Jo’burg’s vibrancy
While acknowledging the horror of the attacks, she relates her positive-minded approach to her desire to present new role models. “I wanted to focus on showing a place where people are living together harmoniously. That’s interesting to me. It’s interesting that it can happen, and that, if you present it on the big screen, it becomes something that’s normal and possible. It’s also something that’s true.”

Perhaps one of the most innovative aspects of the film is its bright and well-considered visual look, peppered with distinctive stop-motion animation, which adds to the dynamism of Ayanda’s life. Her approach was to do “the opposite of what a lot of South African films do, which is drain and desaturate the colour.” Instead, Blecher wanted to highlight the colour. “The set design and wardrobe choices are to show the vibrancy of Jo’burg, as opposed to the dusty, brown images we are so used to seeing.”

With such a committed emphasis on carving out new pathways for South African film aesthetic, what are her thoughts on the future of the industry in the country?

“I think we’re getting better and better, and I think there are so many different new voices that are really original. If you look at Sibs’s [Shongwe-La Mer] film [Necktie Youth] that played in Tribeca and Berlin, you know, it’s an original voice. And Breathe Umphefumlo [by Mark Dornford-May]. These are original voices. And when you start having space for these, and a place like Diff where these voices can talk with each other, that’s how you build your own industry. One that’s not a copy of Hollywood or Nollywood or something else. And it does feel like it’s happening, and that’s incredibly exciting, for me.”

The Durban International Film Festival is from July 16 to 26. Visit durbanfilmfest.co.za for the full programme. Ayanda opens in South African cinemas later this year