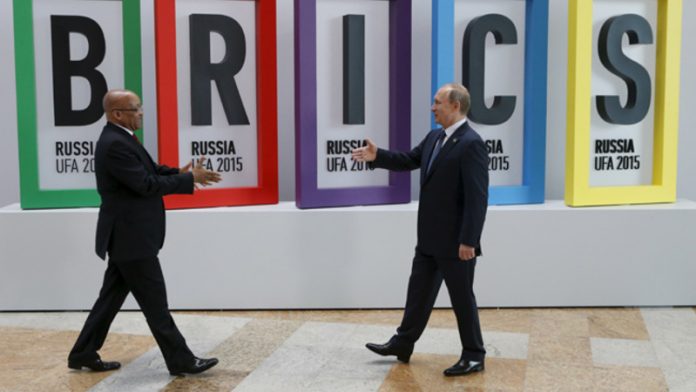 Officials from the world’s largest emerging nations launched the New Development Bank (NDB) on Tuesday, the second of two new policy banks heavily backed by Beijing that are being pitched as alternatives to existing institutions such as the World Bank.

Also known as the Brics bank, it follows soon after the establishment of the China-led Asian Investment Infrastructure Bank (AIIB). The new bank will fund infrastructure and development projects in Brics countries – Brazil, Russia, India, China and South Africa.

The ceremony on Tuesday concludes a lengthy wait since the NDB was first proposed in 2012. Disagreements over the bank’s funding, management and headquarters had slowed its launch.

“Our objective is not to challenge the existing system as it is but to improve and complement the system in our own way,” NDB president Kundapur Vaman Kamath said.

He added that after a meeting with the AIIB in Beijing, the NDB had decided to set up a “hotline” with the AIIB to discuss issues, and to forge closer ties between “new institutions coming together with a completely different approach”.

The bank is considering raising funds by issuing a “substantial” amount of bonds in member markets to help mitigate costs arising from exchange rate fluctuations, he said.

The ceremony, held in Shanghai where the NDB’s headquarters are located, was relatively low-key in comparison to a June signing of the articles of agreement for the AIIB in Beijing, which was attended by delegates from 57 countries and President Xi Jinping.

“From our standpoint we are really looking forward to cooperating with the new institutions … the needs [for infrastructure] are huge,” said Karin Finkelston, a vice-president at the World Bank, adding that the World Bank had been helping the AIIB and NDB on issues such as human resources.

The Japan-led Asian Development Bank, in a statement quoting its president Takehiko Nakao, said it hoped to explore opportunities to co-finance projects with the NDB.

The NDB will have an initial capital of $50-billion to be equally funded by the five members who will have equal voting rights. The capital will be expanded to $100-billion within the next couple of years.

The members will also establish a reserve currency pool worth over another $100-billion. China has pledged to contribute $41-billion, Brazil, India and Russia will each contribute $18-billion, while South Africa will contribute $5-billion.

Kamath, a former executive with India’s largest private bank ICICI Bank, told Reuters earlier this month that the NDB plans to issue its first loans in April next year. – Reuters

The Brics account for a fifth of the world’s economic output and 40% of its population.

For Russia, hit by Western sanctions over its role in the Ukraine crisis that have cut off access to Western funding, thwarted investment and contributed to an economic downturn, greater cooperation among the Brics nations is key.

Its economy has also suffered because of the fall in the global price of oil, its main export, and it has been looking for new markets since relations with the West sank to their lowest point since the Cold War over the Ukraine crisis.

But the diverse group, which has been meeting regularly since 2009, has struggled to come up with unified actions, often instead focusing on criticising the West.

“We will have an open mind in terms of the instruments we will use for funding projects,” said NDB president Kamath.

“Should we approach the financial markets, the capital markets in five Brics countries to raise local-currency funds so that in a way we break the challenge and the cost of dealing in hard currencies where the exchange rate continues to impact you for a long, long time? Could we start by making substantially large bond issuance in the domestic market?”