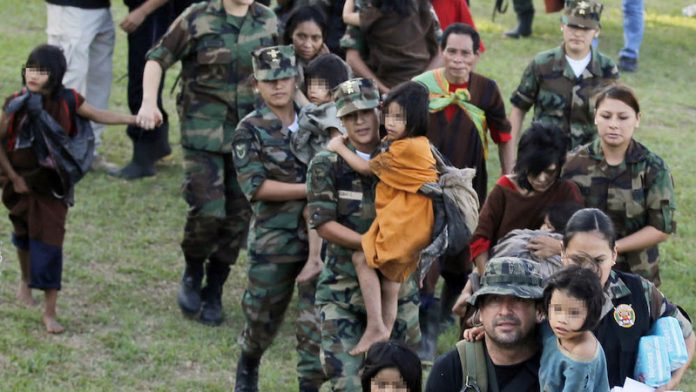 A Peruvian military operation has secured the release of more than a dozen people who were kidnapped by the Shining Path rebel group up to 25 years ago.

After being used as slaves in remote mountain communities, the 13 adults and 26 children were evacuated by helicopters, an army spokesperson said.

Some had grown so accustomed to their lives with the radical Marxist group that they were initially reluctant to be rescued, said Peru’s deputy minister of defence, Ivan Vega.

The eldest captive was a 70-year-old woman who was kidnapped from a convent in Puerto Ocopa decades ago. The youngest was a one-year-old.

The army said many of the children were conceived when the ­kidnap victims were raped.

Others were reportedly abducted from villages, indoctrinated and told they had to work in “production camps” to supply the revolutionary guerrilla group.

About 120 troops and four army helicopters took part in the operation on July 23 in a Shining Path stronghold in the heavily forested valley at the confluence of the Apurimac, Ene and Mantaro rivers, a centre of cocaine production.

The government said the operation was a victory against the Shining Path, which was largely defeated in the 1990s after waging a bloody insurgency that left almost 70?000 people dead or missing.

Remnants of the group remain active. They had been led by brothers Victor and Jorge Quispe Palomino, who have been indicted in the United States for alleged drug trafficking offences. – © Guardian News & Media 2015