Scientists unearth how to manage the Karoo 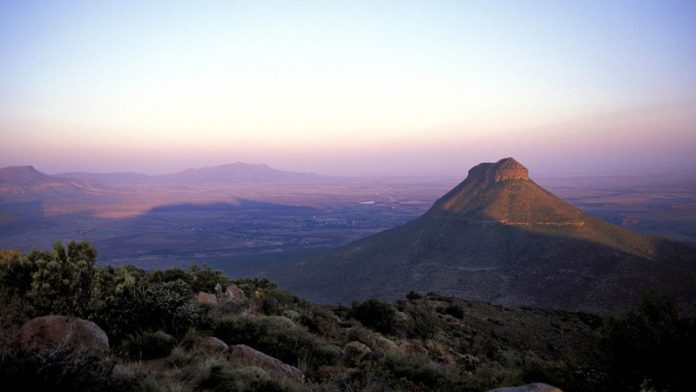 Beneath the dry plains of the Eastern Cape’s Karoo, various layers of rock lie on top of each other in hues from olive-green to black to red, like a large, exceedingly hard layer cake.

Grey rocks cut across these layers, and have forced themselves into the weaker joints between them. The layers are not uniform: cracks fracture the rock and, on the surfaces of some of these cracks, scrape marks show that they have moved. Some have even folded in on themselves like a crumpled car bonnet, except that continents, not cars, have collided.

Some of the cracks, over hundreds or thousands of years, have been filled in with various solid materials, mostly quartz. In others, water has collected in the gaps – sometimes large, as wide as a football field, but usually smaller, even microscopic – called aquifers. People have drilled hundreds of pipes, like straws, probing from the surface into these aquifers, to get the vital water contained within them. When rain falls, the water soaks back into the ground, joining underground flows.

As part of a large-scale study in the Karoo, a team at Nelson Mandela Metropolitan University is trying to map what the rocks under our feet look like, how they formed and what they are currently doing.

Ultimately, we aim to create a more accurate three-dimensional image of the Karoo’s underground geology. This will give us a better understanding of how underground resources, especially water, are distributed. If we understand the natural controls on these resources, we can make informed decisions about how to manage them.

Geophysicists use sensitive instruments to detect the variation in certain rock properties, allowing them to “see” through layers of rock. These properties include density, and how magnetic or radioactive the rocks are.

Each of these properties can be linked back to specific characteristics of the rocks, such as their mineral makeup. For example, a rock containing a lot of iron is more magnetic than one without, although this iron is bound up in specific minerals, not as free iron pellets within the rock. So if we detect a strong magnetic source in our surveying, it is likely that it will be coming from a rock containing a lot of iron, like igneous rocks. (These particular rocks formed in the hot molten magma beneath the Earth’s surface, and then moved towards the surface and solidified.)

Different properties can tell us the story of the rocks under our feet, without our having to drill down to analyse them. For example, density points to how porous a rock is, which indicates how much water or oil it can hold. Granite has more potassium and thorium than basalt and, since these elements are naturally slightly radioactive, you can see them more clearly on radiometric maps.

What is happening or has happened below ground affects what happens at the surface, since different rocks produce different soil, can hold different amounts of water, or have different mineral resources. The methods we use allow us to get images of the rock layers two to four kilometres below the surface.

It is possible to do these surveys on the ground, with backpack- or motor-vehicle-mounted equipment, but South Africa is a big country, so to cover bigger areas we would rather fly over them. The alternative is hiking backwards and forwards across the length and breadth of the country. Usually, instruments for airborne surveys are mounted on helicopters or light aircraft, but in our survey, we plan to use gyrocopters.

Gyrocopters combine many of the advantages of both fixed-wing aircraft and helicopters. They have a main, unpowered rotor (positioned like a hat, same as on a helicopter) which provides lift instead of wings. A small propeller fitted to the nose, like on a light-aircraft, provides thrust. A gyrocopter is basically what you would have if you smashed a helicopter and a light aircraft together carefully enough that the resulting contraption could still fly.

There a few reasons to use gyrocopters: they are relatively cheap in comparison to helicopters and light aircraft, which usually cost in the region of a few thousand rand per hour of flight. Gyropters can be used at about a quarter of the cost.

They are also able to fly safely at very low altitudes of between 20 and 40 metres, roughly one to two cricket pitches above the ground.

Flying low to the ground is better for these types of surveys because you get better quality data that more accurately reflects the underground reality.

When you are flying low, you can use the instruments to only detect one source of variation – for example, a strongly magnetic dolerite dyke – at a time, without other similar dykes nearby interfering with your readings.

If you are flying at a higher altitude, the “window” that you are looking through is bigger, potentially with multiple sources in your “window” and many variations in the property you are interested in. This can make your data muddled and confusing, and may hide important features, especially in areas with complicated geology.

The Karoo, as a geological unit, covers about two-thirds of South Africa’s surface, from the north-western Western Cape through to the western half of KwaZulu-Natal, extending up to the Northern Cape and Mpumalanga from the Eastern Cape. The whole of the Free State and Lesotho are in the Karoo. This is all considered, by geologists, to be one geological unit called the Karoo Supergroup, and consists a variety of different sub-units.

It is also a record of a large, mostly uninterrupted, section of the Earth’s geological history: from 340 million to 180 million years ago. Understanding the geological Karoo better will help us unravel questions about how the current landscape of South Africa formed.

Our survey area covers parts of the Karoo in the northwestern Eastern Cape. The main economic activity in the area is farming, particularly sheep and wool. This region of the Karoo is also home to many small towns and smallholdings, and many families have lived in the area for generations. In order for these people to continue living and farming there, they need water and food for the people, their crops and their animals.

But the plants you grow there, and their health, depend on the soil – which has a direct link to the rocks that were originally in the area, before they were worn down to form soil. Some soils are better suited for growing crops than others. Improving our understanding of the rocks below the surface gives us a better understanding of the soils in an area. This could help us to identify small areas with good agricultural potential, even within larger regions that are generally unsuitable.

The geology, in particular the structures within various rock layers, also has a profound impact on the movement of groundwater. Much of the Karoo is arid or semi-arid, with low rainfall – usually between 350 and 500mm a year or less. So, it relies heavily on groundwater resources – fresh water trapped in the rock underground – for crop irrigation and for drinking water. The growing population in the Karoo has placed increasing stress on Karoo groundwater systems.

By looking at areas where aquifers are linked by zones where the rocks have numerous cracks (which allow for easier movement of water) we can try to identify areas where groundwater in different areas is being extracted from the same aquifer. Our survey is designed to identify these zones, so we can start identifying the links between them and getting a better idea of how the geology and the groundwater potential of the Karoo are connected. We are also hoping to be able to estimate the volume of usable groundwater.