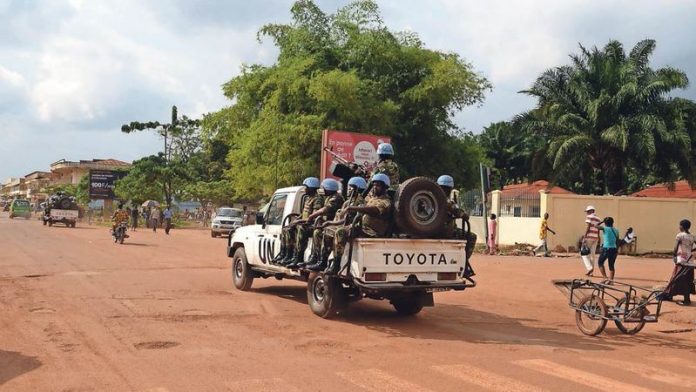 UN peacekeepers shot dead a 16-year-old boy and his father, and raped a 12-year-old girl in the Central African Republic, Amnesty International has alleged.

The claims will intensify pressure on the beleaguered UN mission in the CAR, already under scrutiny over its recent handling of allegations of child sexual abuse by French soldiers and its own peacekeepers.

The 12-year-old girl had been hiding in a bathroom during a house search in a Muslim enclave of the capital, Bangui, on August 2, she told Amnesty.

A man allegedly wearing the blue helmet and vest of the UN peacekeeping forces took her outside and raped her behind a truck. She said he dragged her out of the room, and slapped her when she started to cry.

“When I cried, he slapped me hard and put his hand over my mouth,” the girl was quoted as saying by Amnesty.

She alleged that he groped her breasts and tore her clothes. The girl later showed Amnesty her torn underwear and said: “He threw me to the ground and lay down on top of me.”

The man fled when gunfire erupted outside the compound, according to Amnesty. Family members said the girl was separated from the rest of the family for about 20 to 30 minutes. One sister recalled: “When she returned from the back of the courtyard, she cried ‘mama’ and fainted. We brought her inside the house and splashed water on her to revive her.”

The girl’s mother told Amnesty that after the incident her daughter was crying and extremely upset.

The girl was later examined by a nurse working under a doctor’s supervision, who found medical evidence consistent with sexual assault.

Balla Hadji (61) and his son Souleimane Hadji (16) were struck by bullets in front of their house. Balla was apparently shot in the back, while Souleimane was shot in the chest. A neighbour who witnessed the killings told Amnesty that “they were going to shoot at anything that moved”.

Hadji’s family claimed that the UN peacekeeping troops did not help them to transport the wounded man and boy to the hospital. Rather than provide assistance, witnesses said, the peacekeepers fired another round when the daughter tried to cross the street to reach her injured relatives.

The human rights organisation interviewed 15 witnesses immediately after both incidents this month, as well as the 12-year-old girl and her family.

“There must be a prompt and thorough investigation by a competent civilian authority and the girl must receive full support including medical and psychological care. UN peacekeeping forces in Bangui should review their rules of engagement to ensure they are taking all feasible precautions to avoid incidental loss of civilian life.”

The UN Multidimensional Integrated Mission in CAR said the allegations would be investigated. Hamadoun Touré, its spokesperson, said on Tuesday: “We got the report from Amnesty International today regarding the killing of two people and the alleged rape. We take it seriously. We take seriously anything related to allegations of sexual abuse. We have a zero tolerance policy.”

Touré said he could not comment on the evidence against members of the peacekeeping contingent, who were from Cameroon and Rwanda. “I don’t know. I can’t confirm, I can’t deny anything at this stage.”

An external investigation into the operation was under way, he added, with conclusions due on August  16. “Now that we have these extra issues, we will be broadening the scope of our investigation.”

Anyone found guilty could face prosecution by the CAR’s own legal authorities, Touré said.

UN peacekeepers have been in CAR since September last year in an attempt to calm sectarian violence between Christians and Muslims, which erupted after a coup in 2013.

UN’s response
Ban Ki-moon, the UN secretary general, was “personally dismayed and disappointed, not just by these latest reports, but by the series of allegations that have surfaced in the Central African Republic mission in recent months”, his spokesperson, Stéphane Dujarric, said last Tuesday.

He added: “We would like to emphasise once more than no conduct of this nature can be tolerated and that every allegation will be taken seriously.”

Dujarric made it clear, should the allegations be upheld, the UN would not be responsible for the peacekeeping troops, who are granted immunity from prosecution.

“If a crime of this nature is committed by a military personnel, it comes under one set of rules,” he said. “As we all know, the UN has no direct authority over the uniformed personnel. That person would be repatriated and we would expect them to face justice, be it military or civilian justice, in their home country to the full extent of the law.”

Earlier this year it emerged that French peacekeeping troops had been accused of abusing children in the CAR. In June, Ban announced an independent review of how the UN handled the case, after the Guardian revealed a senior UN official was suspended for disclosing details of the allegations to French prosecutors.

The peacekeeping mission has launched an investigation into an allegation of child sexual abuse against one of its peacekeepers in the eastern part of the country. Mission head Babacar Gaye said he was “outraged” by allegations that UN peacekeepers had abused street children in Bangui. – Guardian News & Media 2015