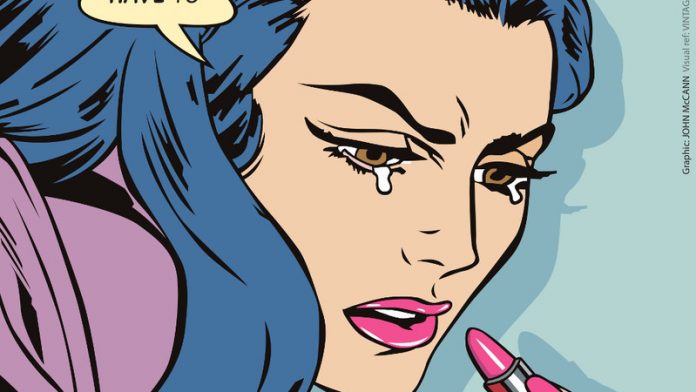 This Women’s Day you might have taken a moment to honour the women in your life, to recognise the barriers behind which they toil or over which they climb.

But when you thought of the historic battle for suffrage or acknowledged the R72 they get for every R100 a man earns for doing the same job, you may have overlooked another significant hurdle that only women face: the burden of make-up tax.

For every pay cheque the average woman earns, a portion will be earmarked for an expense that the average man will never have to worry about. For every year of her life, she will spend between two days and two weeks on a pursuit that most men will never have to dabble in. It’s one of the prices of being a woman, and it’s time-consuming, expensive and bafflingly self-inflicted.

It’s estimated that the global cosmetics industry has an annual revenue of about $200-billion, with market research firm Lucintel estimating that this will reach $265-billion in the next two years and United States-based researcher MarketsandMarkets pitching the price tag at $635-billion by 2019.

Official local statistics do not exist, but a Euromonitor report valued the South African “personal care and beauty market” – which is wider than cosmetics and includes items such as cleansers, deodorant and perfume – at $3.4-billion in 2012.

Largest market
International polls say that between 50% and 80% of women use make-up at least some of the time. In South Africa, the estimate from market leader Revlon is 24%. Nevertheless, ours is the largest market on the continent, which Euromonitor says began small but is growing exponentially.

The African beauty market is expected to double over the next decade, with a projected annual growth of up to 20% in the sales of beauty and personal care products, the Mail & Guardian reported in October 2014.

The use of make-up goes back to 4 000BCE, when Egyptian women began to adorn their faces with copper and malachite for colour and definition, according to the Personal Care Products Council. The ancient Greeks, Chinese and Romans followed suit – and in most cases, the practice was largely a female one.

So what is the modern South African woman willing to pay in time and money to carry the ancient burden of enhancing her looks? A lipstick survey revealed: quite a lot.

“One customer spends around R700 to R800 per month on make-up,” said Tim Moumakwe, the assistant manager at Clicks in Soweto’s Jabulani Mall. “It’s a large amount because most customers buy Revlon. They’re willing to spend more on the brands they like.”

R1 500 a month
Customers at Dis-Chem, located at the Nicol­way shopping centre in the upmarket Johannesburg suburb of Bryanston, spend about R1 500 a month on make-up, according to assistant cosmetics manager Lebo Masinga. “Our customers don’t mind spending R1 000 on foundation or R500 on a lipstick,” she said.

And at Clicks in Gugulethu, the shop’s beauty consultant, Irene Krisjan, estimates patrons spend about R400 a month. “They buy foundations, powder, eyeliner, lipliner and lipstick,” said Krisjan. “It’s really a lot of money, but the people don’t mind spending it.”

Yet South African women claim to spend far less on beauty products. This could be because they’re in denial about their rouge-wearing ways, or because store managers have overestimated the frequency of purchases.

M&G readers reported similar expenditure, with the average respondent to our Facebook survey saying she spends R210 a month.

Average annual spend
The figures tally with those provided by Adele du Plessis, a communications executive for Revlon, who pitches the average annual spend at just under R1 000 a woman. The number, which she cautions can’t be substantiated, reflects the “relatively low levels of penetration of colour cosmetics in South Africa”, but seems fairly high for a country battling a high unemployment rate.

According to our survey, most women report spending about an hour a week applying make-up.

But what’s the gain? As with all taxes, there needs to be a payoff. So what is in it for the taxpayer (that is, the make-up wearer), so to speak?

Most respondents say it’s the added confidence they get from wearing the product. “I’m not dressed without make-up,” said M&G reader Barbara Benjamin (59). “Some women need it to cover imperfections on the face … they use it to feel more confident,” said Krisjan.

That noted, we asked readers whether they would ever consider putting their make-up aside to save time or money. The answer: 40% said they would never consider going without. Twenty percent said they didn’t wear make-up anyway. And the other 40% said they might forego the make-up to save time. Not a single respondent was willing to give up their make-up to bolster their cash reserves. Zet Prop (35) put it this way: “Naw, coz when you don’t have money that’s when you need it the most – hahaha! At least you get to look beautiful.”

Attractive earners
Several studies claim that attractive people earn more. One, published in the Journal of Applied Psychology, revealed that individuals were more likely to award high-level job titles to women who wore make-up rather than to the same women when they had nothing adorning their faces. Another found that men gave waitresses wearing make-up bigger tips.

But when probed, M&G readers were split along gender lines. Those who said they take women who wear make-up more seriously were mostly women themselves. “I’ll take a woman seriously if she knows how to groom herself – it looks professional when light make-up is applied,” said Sharmay Thuynsma, whose comment received 10 (mostly female) “likes”.

Men were more likely to say they were indifferent or that they would take someone who wears make-up less seriously. “A woman who doesn’t wear make-up is a confident woman who believes in herself,” said Hatchwell Mashego (29). “Wearing make-up is a personal choice; I don’t take either less seriously,” said Rob Slinger.

And, if male readers are to be believed, men find women without make-up more attractive. The men responding to our survey overwhelmingly said they prefer women in their natural state.

“Make-up hides women’s true beauty,” said S’fiso Masanabo. “I have never been a friend of the fake individual with a remade head and face,” said Bheki Ningiza.

But some of their female counterparts dismissed these comments as having ulterior motives: “All the young guys don’t like make-up coz they know it’s expensive and they think their women will want money from them to buy [it],” argued Zet Prop.

Whether or not the findings are muddied by a disconnect between what men say and do, the multibillion-rand South African make-up movement is gaining traction and seems largely driven by women. Perhaps it’s time to consider the lipliner as a symbol of the counter-revolution.

Microplastic pollution on tap in SA