Stock gets a makeover 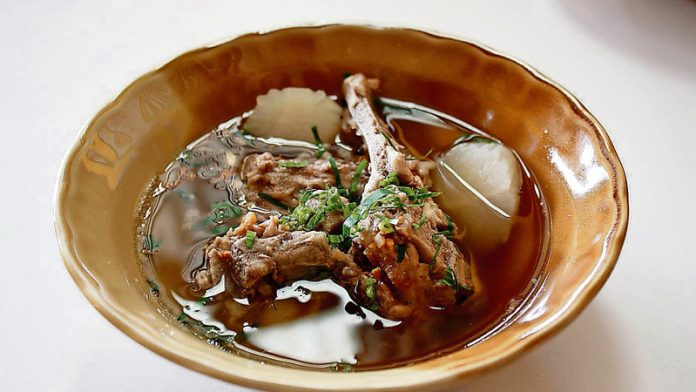 The perfect winter health food isn’t cold, green or slimy. Move over kale smoothies and juice cleanses, because the elixir currently getting everyone from chefs to cynical New Yorkers in a lather is an altogether different drink: hot, life-affirming and meaty.

Bone broth is made by simmering animal bones (usually beef or chicken) for a very long time, to extract maximum flavour and goodness. But is it – as online sceptics suggest – just stock with a makeover and good PR, or is there more to bone broth than that?

Broth is as old as the hills, but it has gained new momentum. New York chef Marco Canora opened a takeaway hatch outside his East Village restaurant late last year, called it Brodo (Italian for broth), and started dispensing chicken, beef and turkey broth with extras such as bone marrow, ginger juice or roasted garlic purée. Within weeks, Brodo was attracting long lines, and lots of press coverage.

Broth is also gaining popularity in Los Angeles (it is a paleo diet favourite), where delivery services wing containers of (presumably well-sealed) meaty goodness to lazy celebs. There is even, wait for it, bone broth for cats.

A reworking of the hearty stocks
So far, so cronut (croissant-doughnut). Unlike recent food fads, though, the bone broth craze is not a novelty, but a reworking of the hearty stocks found in countless food cultures, from Italian to Vietnamese. Which is probably why any mention of the “bone broth” trend online sparks outrage from some quarters. “Bone broth is driving me nuts – it’s blinkin’ stock!” one well-known food writer told me.

In Britain, the best-known advocates of bone broth are healthy-eating writers Hemsley and Hemsley. Jasmine and Melissa Hemsley grew up drinking bone broth made by their Filipino mother, use it as a base for soups, stews and gravies, and add a dash to their scrambled eggs. Properly made broth has many benefits. “It’s delicious, soothing and easy to make,” say the sisters. “Nutritionally, it’s a champion all-rounder, packed with protein, vitamins, minerals, collagen and keratin.”

So why don’t they call it stock? Because, let’s be honest – when most of us see stock in a recipe, we’re more likely to reach for the Knorr than for a pot of slowly simmering beef bones we just happen to have on standby. “Stock can mean cubes, bouillon powder, veg stock or ready-made ‘fresh’ stocks sold in packets and cans. We refer to it as ‘bone broth’ to ensure people can differentiate,” say the Hemsleys.

Another chef who relies on a good bone broth for his cooking is Ken Yamada, chef-owner of Tonkotsu in London. The restaurant group’s famous tonkotsu ramen is made with a broth base of pigs’ shin and trotters.

“With the rise of MSG [monosodium glutamate] and stock cubes during the last couple of decades, bone broth is a welcome trend to put the focus back on properly prepared bone stock with all natural ingredients,” he says.

More than a food fad
Doubters may think rebranding stock as bone broth is a case of semantics. But there are subtle differences. Cooking site The Kitchn says stock is traditionally unseasoned (until you’re ready to use it), while broth is seasoned not only with salt but sometimes spices and a dash of wine.

Bone broth takes much longer to cook than stock, too. Yamada’s trotters and shins are simmered for eight hours, then rested and chilled overnight. The Hemsleys simmer chicken carcasses for between six and 12 hours, and beef bones for up to 24 hours. A long, gentle cooking time breaks the bones down, leading to a rich liquid packed with easily digestible protein, minerals and skin-boosting collagen. You can drink it plain with a little sea salt, gussied up with ginger and chilli, or as a base for pretty much any soup you can think of, to add depth of flavour.

There is no need to get annoyed by the term “bone broth”, say the Hemsleys, who have been a little surprised by some of the online grumbling. Neither they nor Canora are claiming that broth is anything new (Brodo’s slogan is “the world’s first comfort food”). From Jewish “penicillin” to Vietnamese pho, broth plays a role in countless warming, life-affirming dishes. It is naturally gluten- and dairy-free, easy to make at home (ask your butcher for beef bones) and thrifty to boot.

Whatever you choose to call it, this is one health trend most of us can get on board with. Unless you’re vegetarian, of course. – © Guardian News & Media 2015