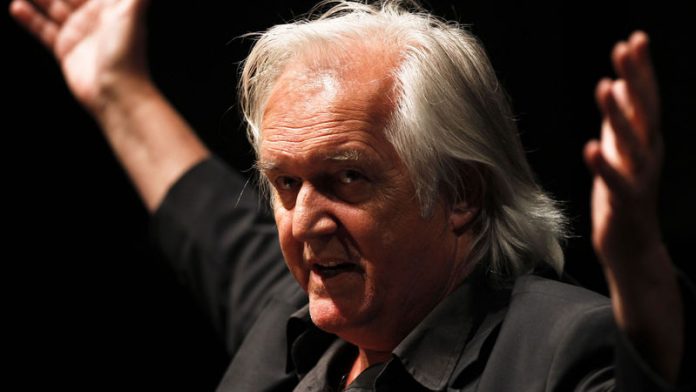 Swedish writer Henning Mankell, author of the Inspector Wallander novels, has died at the age of 67, his publisher said on October 5. The novelist had been suffering from cancer. Mankell gained a reputation as one of the main representatives of the so-called Nordic noir genre, exploring the darker side of Sweden and providing a counterpoint to the country’s image as a relatively crime-free society.

“He passed away quietly last night in the wake of disease,” publisher Leopard Forlag said on its website.

Artist Anton Kannemeyer has become yet another artist to refer to president Jacob Zuma’s genitalia with his new work R is for Respect.

The artwork, part of a new exhibition which opened at the Stevenson Gallery in Johannesburg called E is for Exhibition depicts black protestors marching under a banner reading “Respect for the president’s penis now”.

A black penis and scrotum hover above them, with “R is for Respect” written in block letters at the top of it. The work references Brett Murray’s controversial artwork The Spear, which was defaced when it appeared as part of an exhibition at the Goodman Gallery in 2012.

Asked whether he feared a backlash similar to the one that accompanied The Spear, Kannemeyer told The Guardian that: “I don’t know what the president’s penis looks like so I cannot really draw it. I can just draw a symbolic penis; that’s really what it is.

“I hope there’s not a backlash. I think it’s a work that investigates that work [The Spear]. I hope the debate doesn’t stop there. People need to talk about these things.”

Other depictions of penises in the exhibition include a pencil on paper drawing called P is for Pretoria. The work depicts an airborne black penis, along with the a speech bubble quoting Zuma saying: “You have more rights because you’re a majority; you have less rights because you are a minority. That’s how democracy works.”

Commenting on the work, deputy minister in the presidency Buti Manamela said: “We don’t have time for bigotry and what clearly is racism being projected as art. Hopefully, the artist feels good about himself and I don’t think we want to be preoccupied with this when the country has far more important concerns.”

Cassper Nyovest responds to AKA

In Dust to Dust Phoolo gets personal – he raps about hip hop group Cashtime family, DJ Zinhle dumping Forbes and he alleges that Forbes doesn’t own his music.

“Every time you tweet something and delete it, I forgive you cause I know it’s not you it’s the cocaine,” Phoolo says in Dust 2 Dust.

“So let me go ahead and expose you Kiernan. Let’s tell the people what’s what. Let’s tell them how the drugs got you fucked up. You say you broke up with your girl cause of your album. But you lying bra; she found out that Bonang [Matheba] got you star-struck.”

I made it in @CassperNyovest ‘s diss track. LOL . Rappers are emotional fuck heads.

And Gola didn’t stop there. He had a lot more criticism for Mr Fill up the Dome.

Yo @CassperNyovest you rapping off beat fam. #Dust2Dust

You @CassperNyovest wouldn’t survive an elimination on #vuzuhustle rapping like that. #Dust2Dust

Unathi Msengana back on air

Radio presenter and Idols SA judge Unathi Msengana is back on radio after being suspended from Metro FM in August, following an ugly spat between Msengana and a fan on Twitter. The radio presenter returned to the airwaves this morning on the breakfast show, The 1st Avenue, and received quite a warm welcome from the listeners.

YOUR love is OVERWHELMING! Thank you! Blessed day to you and yours!

Last night Msengana was rubbing shoulders with United States 1980’s pop star Jennifer Rush on Idols SA in Pretoria. Rush is in the country for her Southern Africa tour which takes place in the month of October. Idols SA contestants performed Rush’s 1985 hit single Power of Love along with her on the Idols stage. Rush was also a guest mentor on the show – giving the contestants tips on how to improve their performances.

The Amber Rose organised SlutWalk turned out to be an emotional affair for its organiser, who broke down during a speech in which she addressed the insults levelled to her by her exes. Rose, who dated rapper Kanye West and had a child with Wiz Khalifa, broke down while explaining that she had forgiven both men for the hurtful comments they made about her on public platforms.

According to CNN, “slut walks” started in 2011, in response to a flippant remark reportedly made by a police officer after a spate of sexual assaults on the campus of Canada’s York University. According to local media reports, the officer said: “Women should avoid dressing like sluts in order not to be victimised.”

US Magazine wrote that, “in February, West (38) told Power 105.1’s The Breakfast Club that he had to take 30 showers after being with Rose, who is a former stripper”.

“If Kim had dated me when I first wanted to be with her, there wouldn’t be an Amber Rose,” he said at the time.

Our #MUVA, @DaRealAmberRose is showing off the “My Pussy. My Choice” shirt to @bigboy in the @Real923LA studio. pic.twitter.com/pcgPzoW5rG

Wiz Khalifa, with whom Rose has a 2-year-old named Sebastian, once rapped of falling “in love with a stripper” and then “fell out of love quicker”. From the podium, Rose said, “As you can imagine, him being the love of my life, regardless of us going through a separation or not, it was extremely hurtful.”

Rose also shouted out Kim Kardashian, perhaps backhandedly, saying: “I think it’s really fucking dope that from a sex tape she has thirty different companies and her family is rich and they’re doing really, really well,” she added. “If anything, I support that.”

"To remain relevant to the current generation, kwaito will need to shape-shift and reinvent itself akin to the evolution of hip-hop. "
Read more
Friday

When the AU is making promising strides in realising African integration through the adoption of pop culture, what lessons should be taken from them?
Read more
Friday