‘Real’ men, fresh out of the oven 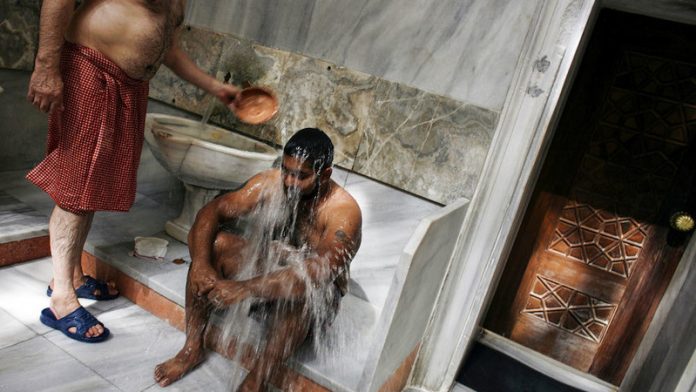 “Really? Nooo! My husband didn’t even mention the death-oven part [of the Turkish bath]. But here he comes, I’ll ask him,” remarked the Norwegian man’s wife. The American woman sitting with us was beside herself with laughter at the tales of the bonding experience we men had subjected ourselves to.

In early September, I found myself at a wedding party in Amman, Jordan. I had somehow managed to wangle myself as a plus-one to a wedding there.

From the moment he picked us up at the airport in Amman, the taxi driver gave an expert running commentary on the seasonal heat. He said Jordan experienced dry heat at that time of year, the kind of heat that fortunately allows one to catch one’s breath in the shade. This pre-wedding heat was not the stuff of a honeymoon for him either. But hey, when in the land of the Bible one should expect all things biblical.

The groom had a contingent of international guests flying in and had prepared a week’s worth of pre-wedding, tourist-type activities for us. Each of about 34 internationals enthusiastically indulged in the native festivities.

During meals some of us would betray our gluttonous tendencies and hopelessly fail to pace ourselves properly for the onslaught of Jordanian dishes. This was a far cry from pap and sishebo (gravy). The problem with these Jordanian dishes was you never knew how many more were coming and, therefore, how much of each dish you should indulge in. It became what engineers call an optimal stopping-time problem.

One of the events the groom had planned was a Turkish bath. The plan was for the women to go with the bride and for us guys to go with the groom. The bride was a New Yorker. She also happened to be prone to sunburn. So the last thing she wanted was to irritate her skin by having a Turkish bath. That is the long and short of how the women ended up being saved from the jaws of the dreaded death oven. No such luck for us men, though.

Every time I recall the humorous conversation with the American wife, I am reminded of that now seemingly universal Sepedi idiom that monna ke nku, o llela teng – a man is a sheep, his cries should be muffled if at all audible.

The American kept saying that it’s so like men to have an awful or painful experience and not have a single one of them utter a complaint – lest they seem not manly enough.

The Turkish bath was like those massive, marble-tiled rooms you see in films about decadent Roman emperors such as Elagabalus or Nero. There are various stages to the bath, and after each you have to take a shower. There is the massage-on-the-marble-table stage, the sauna stage, the Jacuzzi-type stage and the stage where someone gives you a good scrubbing. And then, of course, there is the death-oven stage – also known as the sauna, except I’ve never encountered one as hellish.

The American had me in stitches when she told me why her husband had been traumatised by the massage. The massage table her husband had chosen was manned by a big guy with an enormous potbelly. The trauma came from how the potbelly functioned as the third component of a three-phase pneumatic massage machine – the other two components being the muscular hands of the Turkish masseur.

She laughed as she told me her husband could not get over how the man’s tummy relentlessly pumped his back like a pneumatic press.

My personal Turkish-bath horror was the death oven. You step into this room, which is about 1.5m by 3m, with benches along the sides. It is an oven, saturated with incense-infused steam. You are given a facecloth to place on your head and a crushed-iced smoothie to keep you cool.

As you step in, you are assaulted by the heat, the incense, the humidity and the darkness, all the while hearing the voices of the faceless clever ones, who are sitting near the door egging you to go deeper into the chamber (at that point, you do not know how deep it goes).

My heart was racing as I cautiously made my way into the oven because I could not clearly see where the hell I was going. I was struggling for oxygen like a Guantanamo detainee and sweating like a war criminal at The Hague. And my only pacifier was sucking on a smoothie.

But, of course, being a man, I dared not complain. I could not show fear. I could not show pain. This is how civilisation has progressed since the days when Abraham offered his son as a sacrifice. I am a sheep after all. This is how we men do intimacy: we suffer in silence and then slap each other on the back for taking the punishment like “real men”.

Melo Magolelo is a freelance journalist