When you feed a child, you feed their mind 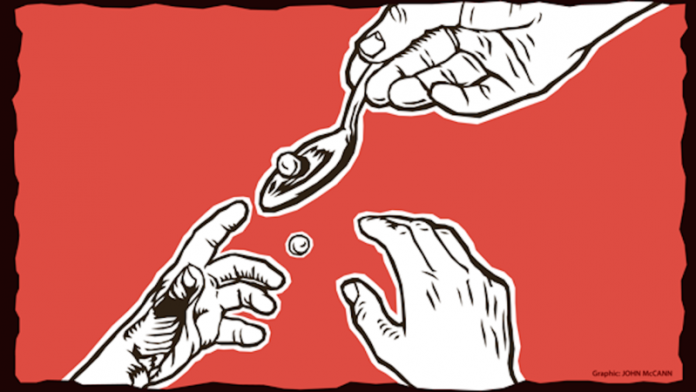 More than one in five children in South Africa are stunted, according to the Global Nutrition Report 2015 and addressing that should be the focus of this government.

Childhood stunting refers to the significant impairment of a child’s growth; that child is very short in relation to peers in their population and age groups because of malnutrition (of the child or the mother when she was pregnant) or chronic disease. And there are greater consequences than immediate hunger or an ability to concentrate in class – it affects cognitive and mental abilities.

“Stunting is a well-established risk marker of poor child development. Stunting before the age of two years predicts poorer cognitive and educational outcomes in later childhood and adolescence, and has significant educational and economic consequences at the individual, household and community levels,” according to the World Health Organisation.

But the pupils in a rural school in the Eastern Cape or Limpopo all appear to be the same height – and that is because stunting in these areas is so widespread.

“If you go to the rural communities, children don’t look like they’re short for their age,” says Sheryl Hendriks, director of the Institute for Food, Nutrition and Wellbeing at the University of Pretoria. “They’re all short for their age.”

Even the World Bank has weighed in on the issue of malnutrition, pointing to the economic costs which it says are “substantial”. In a 2006 report, Repositioning Nutrition as Central to Development, the authors write: “Malnutrition slows economic growth and perpetuates poverty through three routes – direct losses in productivity from poor physical status; indirect losses from poor cognitive function and deficits in schooling; and losses owing to increased health care costs. Malnutrition’s economic costs are substantial.”

On paper, South Africa is food secure, creating enough calories through its agricultural system to sustain its 51-million citizens. Moreover, it has a large social grant system, dozens of food security programmes and the national school nutrition programme, through which the department of basic education – through suppliers – provides meals to about nine million school children.

But, Hendriks says: “South Africa is one of 12 countries in the world [where data was available] where stunting rates went up in the Millennium Development Goal period.”

There are several reasons for this. Widespread poverty is the major factor influencing child nutrition, a situation that is being exacerbated by rising food prices.

In an Oxfam report published last year, Hidden Hunger in South Africa: The Faces of Hunger and Malnutrition in a Food-Secure Nation, the authors write: “Rising prices are pushing people into hunger, with the poorest income groups spending nearly 50% of their incomes on food, and another 19% going on housing, electricity and transport. Commodity prices for maize have increased by 50% in a year and electricity prices have rocketed by over 200% since 2010, forcing people to make stark choices between food and energy.”

Hettie Schönfeldt, an associate at the Institute for Food, Nutrition and WellBeing, says low-income consumers in South Africa “are eating a bleak diet, mostly containing starch, mealie pap and bread, with a little bit of milk, sugar and tea”.

The reality is that starch-heavy, processed food is cheaper and easier to get and then store than fruit and vegetables.

“Five large food retailers control 60% of the market, and outlets are concentrated in towns and cities, which many cannot afford to travel to. The supermarket revolution has in some cases brought a greater variety of food, but supermarkets can be more expensive, tend to promote low-quality processed foods and can push smaller retailers and informal traders out of business,” Oxfam says in its report.

Linus Opara, the South African research chair in post-harvest technologies of the University of Stellenbosch, says: “Even though close to a billion people go to bed hungry in the world, there is a larger number that suffers from hidden hunger. They might get quantities of calories, but not enough nutrients, vitamins, minerals, antioxidants – the micronutrients that nourish our bodies …

“For the poor, it is easier to go for calories. We need to find a way to make specific education and targeted interventions. We need to make fresh produce widely available.” Food gardens are particularly important in this regard, he says.

Schönfeldt and a team of researchers from five universities, through the Centre of Excellence in Food Security and the Bureau for Food and Agricultural Policy, are developing the National Nutritious Food Baskets initiative.

“It’s a new project … [about] how we can guide poor people or our marginalised consumers to make better food choices,” she says. “The price of food is escalating at an enormous speed, and that feeds into why we are doing this: to have a more balanced food basket available.”

Hendriks adds that refrigerating vegetables is expensive compared with buying fast food: “[Poor] people can’t store food so that children can eat five to six times a day,” she says. Hendriks is also a strong proponent of school and home vegetable gardens.

The National School Nutrition programme is meant to play a role in ensuring that children get at least one nutritious meal a day. But the implementation of this programme has been fraught with maladministration, a lack of understanding of its objectives and corruption.

Last year, a three-year tender for a school nutrition programme in Mpumalanga was set aside by the high court in Pretoria because of alleged tender rigging. Also last year, almost 100 children in Limpopo were taken to hospital after food poisoning from nutrition programme meals. Basic education spokesperson Elijah Mhlanga said at the time that the supplier “failed to comply with stated requirements and standards, both in terms of the quality of the food stuffs delivered to schools and the condition of their warehouse”.

This year, whistle-blowers in the Eastern Cape have complained that children in Queenstown were going hungry because funds for the nutrition programme had been misappropriated. In instances such as these, of which there are many, people are – quite literally – stealing the food out of children’s mouths.

In an evaluation of the nutrition scheme in the Eastern Cape and Limpopo by the Public Service Commission in 2008, researchers found that, although the programme benefited children, there were “several cases of nondelivery, delays in delivery and delivery of wrong or poor quality of food were reported in both provinces. It is important that a tight system is put in place to monitor the supply of food. Without such a system, suppliers may invoice the department as if they have supplied the required quantity and quality of food to the contracted schools.”

Yet, says Equal Education’s Daniel Linde, this is often still the case, even though this report was written seven years ago. “Its [the nutrition scheme’s] administration is crucial. There are significant concerns around its implementation,” he says. “There is no disciplinary process or procedure linked to the misuse of funds.”

Similar to households in rural areas, schools often do not have the facilities to store and prepare foods – meals are prepared in makeshift corrugated structures or in huts with textbooks piled along the walls.

“In the Eastern Cape, hundreds of schools are still without electricity, and the ability to prepare and store food is compromised. We’ve seen in KwaZulu-Natal and Limpopo children not having meals at certain stages of the year because it rains and [it is not possible] for a truck to deliver food.”

Although the department of basic education has the best of intentions in its proposed menu, the reality is this menu is often not being met. According to its documents, “school menus should offer tasty and adequate meals, which must fulfil at least 30% of the daily nutritional needs of learners per meal”. This meal should be composed of protein (animal or vegetable), starch and vegetables (at least one green and one red or yellow or orange vegetable per meal).

Linde says there is a “consistent failure” to meet the targets set out in this menu. “The meals are often very basic, not [including] the nutrients that the children need, especially among younger learners,” he says. “It’s an incredibly dire situation if those early childhood years are missed.”

But the data from the likes of the Global Nutrition Report 2015 and from South Africa’s researchers show that those early childhood years are indeed being missed. Poor school pass rates, inequality and its link to crime all start with nutrition. Allowing children to grow up healthy and strong should be priority number one.

Stunting is irreversible. By not educating parents about what to feed their children, by keeping a healthy diet out of the reach of the poor, by not tightening our grip on the national school nutrition programme, we condemn more children – every single day that these children and pregnant women are not consuming healthy food – to the cycle of poverty.