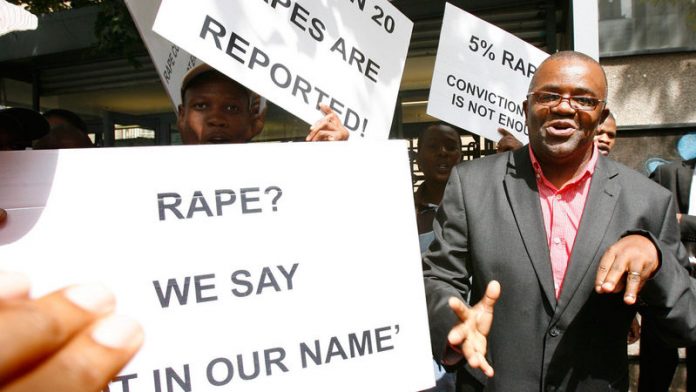 Let us be clear: this act of simulated rape is wrong. It is disgusting and it cannot be justified. And we have to say that the boys’ stupidity points towards the underlying culture of patriarchy, pornography and a lack of understanding of real-life issues.  And yet, in the midst of this, we as a society have some hard questions to answer beyond the predictable extremes.

Why is there such silence on the issue of the actual, real-life rape of a 12 year old boy by two students? The level and volume of outrage is lacking when it involves those who are in the margins: bring in the reality of wealth and privilege (on both sides of the story) and we find our voice to stand up against all injustice. The same rape culture that leads to these schoolboys simulating rape led to this, and every other act of depravity. Yet, like with Oscar, money talks and stories of the wealthy speak.

Does that show our own distaste for the poor, for those who do not have a voice? Why does rape seem to be called a different name?   Perhaps we can name rape the ultimate form of patriarchy. Does the act of rape portray the final act of force, when someone weaker is dominated for the sake of power, and sex?

Sex and Power and Domination; if these are the signs of patriarchal life, then rape is its manifestation. Add in money and shock and the response to the simulated rape is understandable. Another question to consider is if this problem is unique to boys’ only schools. Surely expressions of patriarchy, and rape itself, occur at all types of schools. Yet is there something about “boys being boys” that leads to this behavior? Are we as men rapists at heart? Or do the traditions and institutions, and family lives we live enforce our privilege? These tough interrogations on masculinity need to be explored on a deep, systematic level.

Only if we allow these questions to simmer within us, and our discussions, can we come up with a balanced response to the problems facing us. We all know that this is not an isolated incident. This will not be the last incident of patriarchy enforcing itself as rape-culture and we know that the quest for true and healthy masculinity is still far away.

Let us be careful in naming that which is not. Let us remember that these young men are NOT rapists. What they did was wrong, and they are being punished accordingly (and in the scorn of the social media chastisement, the punishment will echo far beyond the mist of Hilton). Yet the educator in me wants to move from complete destruction of their lives to a teachable opportunity: not just for them but for the stories of institutionalised masculinity found in our schools. Education is rooted in these crises, we can condemn but never give up, we can despair at the lack of progress but we must never lose hope. We cannot allow a name to remain; we have the power to rename.

We need to share stories of the damages of patriarchy, and the quest for equality using that which leads to these discussions. Social media is a paradoxical tool; it allows glimpses into our dark passions, but in allowing those glimpses, it encourages, or enforces, the need for discussion, and the needed changes. The fact that this incident has been universally acknowledge by the school and parties involved as being wrong, despicable and unacceptable highlights that there is progress. I am sure most boys schools will urgently be addressing this in their assemblies, bringing in speakers to speak, not just on the horrors of rape but the need for equality. They are striving to present themselves as breeders of a new kind of man.

Within my classroom a Rachel Held Evans quotation is prominently displayed. Its simple message that “Patriarchy is not God’s dream for the world” has not only become a vision for my life but led to some wonderful discussions around the nature of masculinity and how, as a feminist man striving for a world of equality, maleness needs to be deconstructed to its roots.

This is part of education for me. And I am sure that there are many teachers across the country at private and public schools, who are strongly passionate for gender equality, who cannot abide by rape, and for whom the evolution of students’ views of gender is a slow turning wheel, that year in and year out, is repeated ad nauseam. And sometimes that light shines. And we hope. We chose to name Rape and Stupidity, yet we will not let rape and stupidity define us.

Jonathan Alexander Smith is an English educator at a private boys school in South Africa, who is passionate about sensitizing the boys he teaches about issues of gender.

Protecting women on campuses is a priority

Many Ugandans find Stella Nyanzi’s mode of protest, including vulgar insults and stripping to make a point, unsettling. But her challenge to the country’s patriarchy could bring much-needed reform
Read more
Opinion

We condemn the killing of a black Americans, yet women, African foreigners and queer people are regularly abused and killed in SA
Read more
Coronavirus

Human greed has brought us to the brink of societal collapse. It is time for a student-led revolution to promote a transition to a new economic system
Read more
Opinion

The scales are still tilted in favour of men, but younger people with tertiary education have less discriminatory attitudes
Read more
Advertising
Continue to the category
Politics