Hamas wants to set up shop in SA 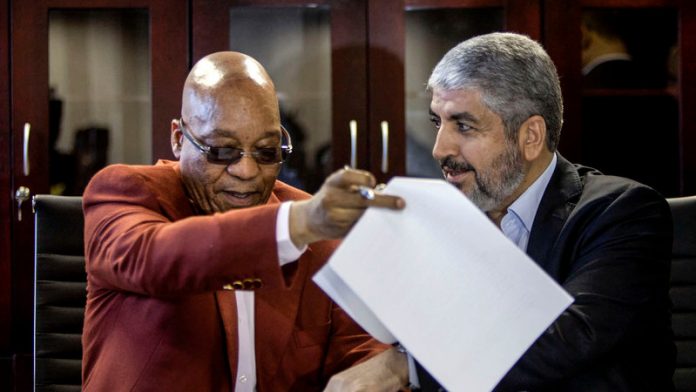 On Monday afternoon President Jacob Zuma got a letter on his desk.

He probably didn’t read it right away because he was at the ANC’s headquarters, Luthuli House, meeting Israel’s number one enemy, Khaled Meshaal, and other senior members of Palestinian resistance movement Hamas.

The letter was from the South African Jewish Board of Deputies, a pro-Zionist lobby group that called the ANC’s invitation to Hamas to visit South Africa a “shame”.

Subsequent to the high-level meeting between ANC and Hamas leaders, it was announced that Hamas is looking to open offices in South Africa. The Israeli government and Zionist lobby groups couldn’t be more outraged. In stark contrast, Muslim organisations and pro-Palestinian lobby groups showed unapologetic jubilation.

For those who sympathise with Israel, a “terrorist” organisation likened to Boko Haram and the Islamic State would be setting up shop in South Africa. For pro-Palestinian activists, on the other hand, this visit would be the fruit of constant solidarity.

ANC secretary general Gwede Mantashe said Hamas opening a South African office would achieve strengthened solidarity, and that the Palestinian organisation could learn a lot from the governing party.

“We are discussing whether Hamas should not open up offices in South Africa so that we can talk,” Mantashe said. This was part of an effort to improve communication between the ANC and Hamas, he said. “The brutality of Israel on Palestine is known by everybody,” Mantashe said. “It requires stepping out of our solidarity and stepping up the struggle of Palestine itself.”

Meshaal, who led the Hamas delegation, agreed that his organisation could learn much from the ANC.

According to the letter of intent signed between the two parties, the ANC has called on Hamas to collaborate with all Palestinian formations in finding a viable strategy to end the Israeli occupation. Hamas has been at loggerheads with the Palestinian Liberation Organisation and Fatah, disputing tactics used to counter the occupation.

Meshaal said Hamas is now ready to discuss a coherent strategy with all parties involved. “Hamas is committed towards continuously resisting the illegal occupation and all the war crimes committed against our people.”

The ANC refers to Hamas as freedom fighters like the party’s former armed wing, Umkhonto weSizwe, which was formed to fight apartheid.

But Michael Freeman from the Israeli embassy in Pretoria disagrees. “I don’t think it’s a secret. Hamas is a terrorist organisation,” he said.

If Hamas opens an office in South Africa, it would be like any other extremist terrorist organisation setting up office here.

“It is no different to al-Shabab or Boko Haram or even [the Islamic State],” he told the Mail & Guardian.

Meshaal was asked whether Hamas supported extremist groups like the Islamic State and his answer was no.

“We don’t want terrorism; we are for legitimate resistance of occupation,” he repeated throughout his South African visit.

Mary Kluk of the South African Jewish Board of Deputies said the ANC could not condone extremist behaviour. She would not accept the ANC’s view that Hamas was resisting an apartheid-like regime as the ANC had once done.

“I don’t see in the Umkhonto we-Sizwe charter that they should kill every white,” Kluk said, in reference to what she claimed was Hamas’s intention to kill all Jews. She said her organisation would like to urge Zuma to engage with the high-level Israeli delegation that is soon to be visiting South Africa.

Unofficially, there is talk among the pro-Zionist lobby group of like-minded investors pulling out of South Africa if Hamas opens an office here.

The Israeli embassy would not comment on the rumour, with Freeman insisting that at this stage the focus is on expressing condemnation of Hamas’s visit to South Africa.