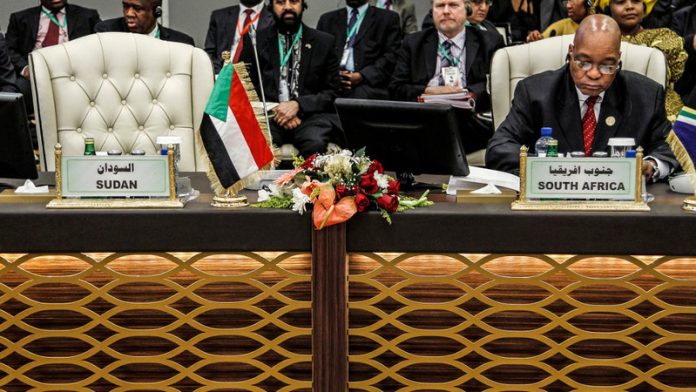 South Africa is not about to withdraw from the International Criminal Court (ICC), despite the ANC resolving at a conference earlier this month that the government should do exactly that.

The Mail & Guardian has learned that a difference of opinion in the government has stalled the matter and that it is reluctant to implement the party’s resolution.

This is the strongest signal yet that withdrawing from the ICC is not universally supported in the ANC and among its deployees in government, despite the fact that party leaders have claimed unity on the matter.

South Africa has been at odds with the international court since June, when Sudanese President Omar al-Bashir visited the country to attend an African Union summit. As a signatory to the ICC’s Rome Statute, Pretoria was expected to arrest al-Bashir – indicted for war crimes, crimes against humanity and genocide – but President Jacob Zuma’s government allowed him to leave the country despite a court order specifically prohibiting his departure.

A senior government official in the diplomatic corps told the M&G that the stark differences in how to handle the country’s proposed withdrawal from the ICC are mainly between those in government who understood the possible negative impact of that action and politicians who simply wanted to take the hard line to make a point.

“We regrouped as diplomats and said: ‘Yes, we want to consider and respect the movement’s resolutions, but there are issues that we need to consider first,’” the government source said.

“We [South Africa] are the leader on the continent and we are the ones who stopped African countries from withdrawing from the ICC. We can’t engage on that matter before we make the necessary consultations with other African countries.”

The source was referring to the African Union summit in 2013, where South Africa convinced fellow countries on the continent that it was a bad idea to leave the ICC. At the time, the ANC had asked the South African delegation “not to break ranks with the continent”, whose members were almost unanimous in their wish to withdraw from the Netherlands-based court.

The same source stressed that there won’t be “any movement on this any time soon. In fact, expect the government position to say after looking at the NGC [national general council] resolution and reviewing our participation in the ICC: ‘We don’t think it’s a good idea to pull out of the ICC at the moment.’”

A second diplomatic source told the M&G that international relations officials are not convinced by the reasons behind the ANC’s resolution. This second source said South Africa’s withdrawal from the ICC would, if it happens, affect the country’s efforts to transform the United Nations Security Council. The source said while the Security Council cannot impose sanctions on Pretoria because of noncooperation with the ICC, withdrawing from the court would affect the country’s international status.

The first government source said that even if pressure was exerted on government to withdraw from the ICC, starting the process “won’t happen in the next three years. If you’re expecting a mass exodus from the ICC because South Africa is pulling out, don’t hold your breath.”

A technicality in the ANC’s resolution could be used to work around the matter, the source said. “The narrative in government is that the NGC did not say pull out. It said: ‘Review your participation in the ICC.’ Our role as diplomats is to remain sober instead of being influenced by political emotions. These are people who’ll say: ‘Break ties with the West and go with China,’ without thinking about the implications. Europe is still our strategic trade partner.”

Another diplomat said that for now, officials are telling their global counterparts that withdrawing from the ICC is merely a party decision and not the official government position.

The government position lends credence to information shared by M&G sources that al-Bashir will not return to South Africa for the Forum on China-Africa Co-operation summit in December, despite earlier indications that he would. The Sudanese delegation would instead be led by one of that country’s Cabinet ministers.

“South Africa will not take a risk of inviting al-Bashir here again after what happened,” the first government source said. “Do you think he also wants to go through all that [being sneaked out of the country for fear of arrest] again?”

International affairs spokesperson Nelson Kgwete referred questions to the ANC because, he said, it was the party that had mentioned withdrawing from the ICC.

ANC spokesperson Keith Khoza said the party’s resolution said the country should pull out of the ICC as a “last resort”.

“The position of the ANC was that the government must engage other governments within the African Union, so that it’s an AU matter. They must explore other means of addressing what has been identified as problems,” he said. “If that fails then they must withdraw, so withdrawing is the last resort.”

But ANC national executive committee member Obed Bapela, speaking on behalf of the international relations commission at the NGC, firmly stated that the ANC wants South Africa to start the process of leaving the international court.

Bapela’s position is supported by the resolutions published on the ANC website, which say that “the NGC took the decision to ask the ANC-led government to begin the process of withdrawal of its membership of the ICC, preceded by the discussions that are taking place among the member states of the ICC and those taking place within the African Union on the ICC matter”.

A director in the prosecutors’ office at the ICC, Phakiso Mochochoko, noted that whether or not South Africa leaves the ICC, it has no bearing on the country’s obligation to have arrested al-Bashir when he entered South Africa in June, or the subsequent processes. ICC chief prosecutor Fatou Bensouda this week asked judges to set a firm date by which South Africa should explain how al-Bashir left the country.

South Africa’s first democratic president, Nelson Mandela, and its first justice minister, Dullah Omar, would be heartbroken at the ANC’s decision to withdraw from the International Criminal Court (ICC).

So said Phakiso Mochochoko, a Lesotho national with a history of fighting for human rights in South Africa – and now an officer of the ICC – this week.

“I always said that people like Omar and Mandela would be turning in their graves if they [could] see what is happening,” he said.

Mochochoko is currently the director of the jurisdiction, complementarity and co-operation division in the office of the ICC prosecutor. He has worked at the court, based at the Hague in the Netherlands, since its inception in 2002.

Standing in a briefing room in the temporary structure that was once a parking lot and now houses the ICC, Mochochoko recounted how he worked in Durban between 1992 and 1994 at the height of the conflict between the ANC and the Inkatha Freedom Party.

He worked for Lawyers for Human Rights and a legal resources centre during the transition to democracy. He was also part of a team that embarked on a voter education drive before the first democratic elections, facing resistance from some quarters.

“We had to go at night to try and educate people about voting so that IFP members would not see us,” Mochochoko recalled. But once the transition had been set on track, South African leaders led the campaign for accountability and global human rights.

Omar and Mandela, said Mochochoko, had fought tirelessly to set up the court, driven by a dedication to ending impunity for leaders guilty of genocide and crimes against humanity. They lobbied for more African countries to be part of the Rome Statute. Currently, 34 African countries are signatories to the ICC. – Qaanitah Hunter