Finding the Missing link between funny and passé 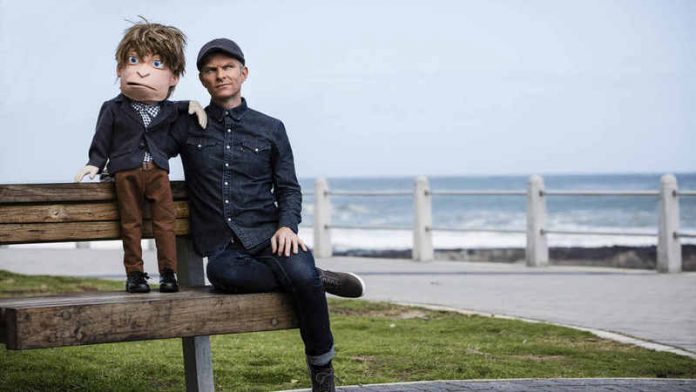 “I am done with being your little black puppet. If it had got any worse, I would have ended up being a journalist at Naspers.”

Conrad Koch and his famous puppet have had a coming-out party. At his latest show, which has just concluded at the Joburg Theatre, the smartmouth Chester Missing – previously black or coloured – revealed himself to be white, with a backstory to match.

For the academically inclined Koch, a trained anthropologist, the decision is layered and speaks to the idea of representation in the first place as well as journeying into the very heart of racial essentialism, while still being damn funny.

The introduction of a certain drunken ostrich puppet to the show allowed Koch to cut loose and just have fun. Technical innovations had him turning audience members into live puppets, with raucous jokes that sailed dangerously close to the edge. Without the burden of delivering material while being accused of trading in “blackface”, he was the most relaxed he has been on stage for a while. But is he pandering to his critics?

Why make your puppet white?

There are a number of reasons. The narrative of Chester the black puppet speaking back to me – the middle-class male, heterosexual, white ventriloquist – is complete. I don’t have anything more to say with that satirical set-up. I was invoking a blackface image in order to speak back to it. The joke was never at Chester’s identity. The joke was the power relationship between him and me: a metaphor.

Do you think you avoided the tired comic gimmick of playing with stereotypes?

The point was specifically about speaking back to the stereotypes and questioning them and breaking them down. So the reason to end it is I’ve done all the jokes. Now, when I do the joke of Mmusi Maimane as Helen Zille’s puppet, a lot of people in the ANC are doing that joke and it’s becoming racist.

Every time I walked on stage I had to be self-reflective, painfully so. I’m totally about speaking back to privilege. But because what I was appropriating was so painful, I had to spend a lot of time on it.

It was about to get tired. If Chester stayed black, it would naturalise it.

You would end up becoming the thing you were trying to subvert?

Yes. It had to have a narrative curve. You’ve got a story: there was a black puppet; he questions the apartheid legacy and reflexively lambasts me for blackface. In this next show he turns it around and he comes out as white. The next set of material will be a white puppet talking about whiteness. Making him white allows for a whole new set of conversations.

What else sparked the decision?

What I find when I travel overseas is that Western audiences don’t get the racial metaphor. To some degree in New York, and even more so in Montreal, the problems of a black puppet oppressed by a white ventriloquist don’t have the same emotional punch as in South Africa because it’s a Eurocentric environment. That conversation requires black audiences. If I’m going to take this act internationally, I have to do it within a white conversation.

Is that to sell tickets or to help audiences be more racially aware?

Well, we do have to be appealing. There is a tipping point where you’re giving them too much of what they want. You have to speak back to power but in a way that power keeps listening.

Is there a danger of this becoming too high-concept? Are you going to lose the audience?

No, because Chester’s the same guy with pink skin, and impersonating Helen Zille is frickin’ hilarious. Issues of white privilege aren’t suddenly going to stop being relevant.

Do comedy. Have fun with it. Chester being white allows me to feel less like I am juggling the family silver every time I perform.

Definitely. That’s why I take the piss. In the video [about the backstory], I brutally hold him down and spray-paint him because: What do you think happened? How do you think he became brown? The seriousness with which people take this puppet is wonderfully hilarious.

Of course, Chester was never actually black. He’s me. He’s Conrad Koch. If anyone is wondering: he is a puppet. Changing him removes the question of blackface as a simplistic dig at my work, and as a basic go-to question for uncreative journalists, and sends up the idea that a puppet can have a race.

Chester’s race comes back to racial essentialism. He was black and uncertain of his identity, hence his name, Missing. It’s me saying there isn’t such a thing as biological race on the one hand, but on the other hand the burden of history and the implications of it are real. Those two statements are what Chester was saying.

Strip away the blackface that causes so much pain

Rows, racism and couples’ comings and goings in celeb world