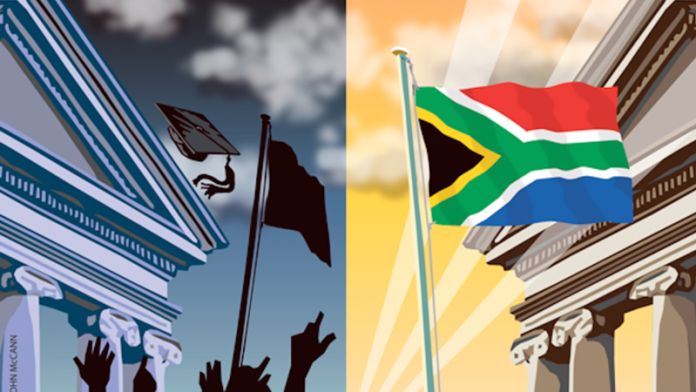 Has higher education become the poisoned gift of national liberation? Robert Aman, a lecturer in inclusive education, argues that the multicultural agenda in modern states is dead in the water, and that multiculturalism is nothing more than state-institutionalised separate development. Western culture remains relatively untouched by the proximity of other groups and is in perpetual conflict with othered groups.

Similarly, political theorists Michael Hardt and Antonio Negri and historians such as Jon Halliday argue that, though Western imperialism might have faded, imperial tendencies still manifest themselves.

South Africa’s higher education system unwittingly perpetuates this hegemony in its efforts to transform. Not being part of the Western education hub, our higher education institutions strive to be competitive with Western universities to provide for a highly skilled but disengaged middle class that is mobile and global in its aspirations.

Higher education institutions, funded as they are by public money and parents’ fees, market themselves as being enabling of this mobility.

In South Africa education is a right and yet the state cannot sustain it, despite there being no shortage of funds for presidential jets, blue-light brigades and chief executives’ outlandish salaries. If there was ever a moral question for our times, it has to do with the fact that, despite such wealth, we cannot seem to afford, let alone provide, decent education.

Where we can provide it, many recipients, far from feeling any gratitude or loyalty to South Africa, accumulate wealth far surpassing their needs, or emigrate north to states and economies where, as part of the global cosmopolitan class, they remain indifferent, as cultural theorist Kwame Anthony Appiah argues, to local contexts.

The discourse of globalisation is concerned with the accessibility of technology, the promotion of democracy, the free market and the narrowing of the gap between the rich and the poor, the settled and the displaced. The truth is that only the privileged few participate in this fantasy. The South African government is not unaware of this, and campaigns are initiated periodically to buy South African, return to or stay in South Africa, or to review the gaps between the highest and lowest paid.

Higher education has been massified, but the system neither possesses the capacity nor the infrastructure to provide for a level of personal attention to young people, either academically or in terms of citizen development.

Coupled with the ongoing legacy of apartheid in which middle-class – though not necessarily white – South Africans continue to be the most enabled students in the system, the paradoxes of what we aim to achieve, in terms of a highly skilled workforce of dedicated and patriotic citizens, become painful rather than semantic.

Our education remains geared towards the needs of the northern hemisphere: despite vocal commitments to diversity, we know that sexism, racism and prejudice are so rife as to be the topic of debate in schools and universities around the country.

Why do we struggle to promote women, black people or gay people in leadership? Despite celebrating multilingualism, why do our universities continue to choose to privilege English in the name of inclusion, and why do we struggle to develop African languages for higher learning so that home-language instruction – the most recognised pathway to academic success in the early years – can become a lived reality for our children?

Despite our calls on citizens to demonstrate compassion for migrants and refugees, do we educate for an appreciation of difference as being much more than a source of curiosity at best, and xenophobia or racism at worst? And, finally, despite the dire and evident need for better leadership in our institutions, why do we signal to new generations of white, Indian and coloured graduates that their value to the nation – which has subsidised and nurtured their development – is relative to their skin tone? What an astounding set of contrary messages, the combination of which does little to address systemic inequality internally and much to support the long-lived hegemony of Western states. How can we explain this to ourselves?

Christopher GoGwilt, professor of English and comparative literature at Fordham University, suggests that forgetting imperialism’s brutality is a prerequisite for maintaining Western hegemony. I deal with the three examples provided previously.

Employment equity, grounded as it is in a need for historical redress, obliterates the value of the present potential for achieving such redress through the collective participation of all race groups in the remaking of a new South Africa. What is the point of excluding some of our most skilled and best educated people, whom we have nurtured here? By doing this we encourage no belonging, no unity, no sense of a shared future, no responsibility for each other and even less for those who seek refuge with us.

Furthermore, university curricula remain untransformed, as social historian Achille Mbembe noted in the #RhodesMustFall talks at the University of Cape Town. What would that transformation mean? Certainly, not one or two modules in which transformation or colonialism is analysed at universities.

Vice-chancellors, instead, commit students in our professional degrees to learn an African language so that intercultural communication is possible. And, Minister Blade Nzimande, make it attractive to our students to become African language teachers. Make it compulsory, Minister Angie Motshekga, for all our teachers to attend summer and winter schools to improve their content knowledge. Reform employment equity legislation, Minister Mildred Oliphant. Yes, we do want our best graduates here for our municipalities and our state institutions.

Inasmuch as universities are accused of ignoring the need for education for transformation, the government also needs to accept responsibility for an increasingly divided society anticipated through its legislative frameworks and practices.

Robert Balfour is dean of education sciences at North-West University