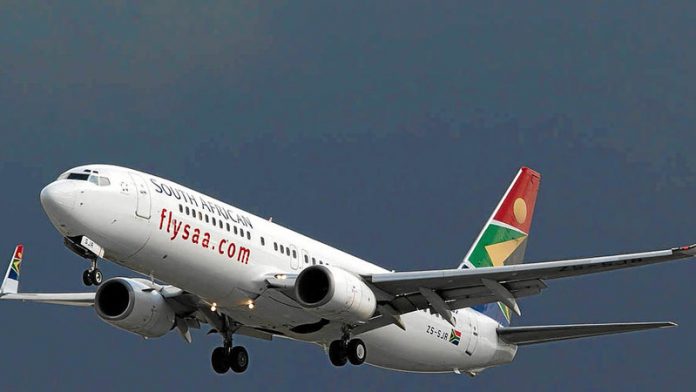 The freshly appointed SAA acting chief executive has spoken his first words in the new role.

Musa Zwane, the seventh permanent or acting chief executive at SAA in less than four years, told the standing committee on finance in Parliament on Wednesday that SAA needs to engage with all disgruntled employees that have issues with the state-owned company.

The head of the state-owned carrier’s maintenance unit was moved into the role to replace Thuli Mpshe, who held the position on a temporary basis for less than four months.

SAA named Mpshe as acting chief executive after Nico Bezuidenhout returned to his role as head of low-cost airline Mango in July.

On Tuesday, the SAA board said that Mpshe, whose main role is head of human resources, was asked to return to this department to focus on the issues stemming from the disgruntled employees.

Zwane said SAA’s pilots, cabin crew and technical staff had serious issues with the company and that management has to engage with each team equally.

“We cannot elevate one stakeholder over the others,” he said.

On Monday, at a special general meeting at company headquarters, SAA pilots voted overwhelmingly in favour of a vote of no confidence in the chair and non-executive directors of the board.

Captain John Harty, chair of the South African Airways Pilots Association, said the vote of no confidence was prefaced by a discussion on the financial situation at SAA, the controversial Airbus deal and possible breaches of certain legislation as well as the impact of recent statements made by the chair on the authority of the captain of an aircraft.

Harty said it was hoped that the vote of no confidence would serve as a clarion call to Minister of Finance Nhlanhla Nene and the government that the future of SAA requires immediate and urgent attention and that a new board, “fit for purpose and able to deal with the challenges currently facing the airline”, be appointed as soon as possible.

Zwane said the pilots were complaining about the Airbus deal, while the cabin crew and technical staff had historical issues around racism and discrimination.

“All of these are key to having a smooth running organisation,” he said.

Airbus deal
The R6-billion Airbus aircraft deal came under the microscope after SAA board members were allegedly put under pressure to approve “an unaffordable” deal with the French aircraft manufacturer. The deal has now become the subject of an Ernst & Young investigation.

In 2002, SAA ordered 40 aircraft from Airbus. The arrival of the aircraft was staggered, with 30 delivered by 2013. From the original deal, there were about 10 A320-200 aircraft still outstanding. In 2014, SAA took a decision to amend the original contract, wanting to swap the remaining 10 for aircraft that had bigger engines and were more fuel-efficient.

Owing to the dollar-rand exchange rate, SAA could only secure five aircraft for the initial amount that had been paid.

SAA meanwhile said it plans to make an announcement later this week regarding the position of the chief financial officer after Wolf Meyer resigned to pursue other interests.

In July, SAA’s chief strategy officer Barry Parsons resigned, saying he had lost all confidence in the board to lead and progress the business.

SAA has reduced its headcount by 484 staff as the airline works to stabilise its turbulent finances.

Reduced headcount
Meanwhile, Zwane told parliament on Wednesday that by freezing all non-critical positions, SAA had managed to reduce its headcount from 8 747 to 8 263.

Explaining the dramatic increase in SAA’s headcount from 2010 to 2014, he said that in 2010, 437 employees procured through labour brokers were absorbed into the company and converted into fixed-term contractors based on an agreement with organised labour.

“In 2013, these employees were converted into permanent employees,” he said.

Zwane said SAA wants to be profitable at an operating level in three years and fully profitable in five years.

He said internal factors impacting SAA’s costs include ageing aircraft, a weak balance sheet, legacy transactions such as the A320 deal and staff costs.

“There has not been a capital injection and the national treasury has indicated there will not be any,” he said. “SAA continues to rely on debt funding on the back of government guarantees. This is extremely costly and contributes to the erosion of SAA’s capital base.

“The estimated cost of funding for the 2016 financial year will be in excess of R1-billion,” said Zwane. “SAA can be turned around without a capital injection; however, given the current macroeconomic environment, this will only be likely to occur in five years’ time. We remain hopeful that government will reconsider capital injection.”

Zwane said there were no plans to cancel the Johannesburg-Durban route for Mango or SAA flights.

“SAA has reduced capacity on this route by 15% year on year and carefully aligned its flight schedule together with Mango’s in order to maximise connectivity into SAA’s regional and intercontinental flights, while at the same time covering all possible times of day for the convenience of our point-to-point passengers.

“The results have met our expectations as the Durban route has now returned to profitability,” he said. “In addition, the board has approved the resuscitation of the Durban-Cape Town route.” – News24.com

Industry experts predict the R10.5-billion from the treasury to rescue the airline may not be enough, but the rescue practitioners say the money is enough to ‘settle the sins of the past’
Read more
Business

The SOE has asked the government for R3.5-billion in extra support over the next three years to offset losses incurred because of the pandemic
Read more
National

‘Myeni obstructed the work of the Zondo commission’ — Hofmeyer

The cash-strapped national carrier is in the process of recouping its blocked funds from Zimbabwe, which could go towards financing the airline’s business rescue plan
Read more
Advertising