Pravin Gordhan returns: The tweets that had us in stitches 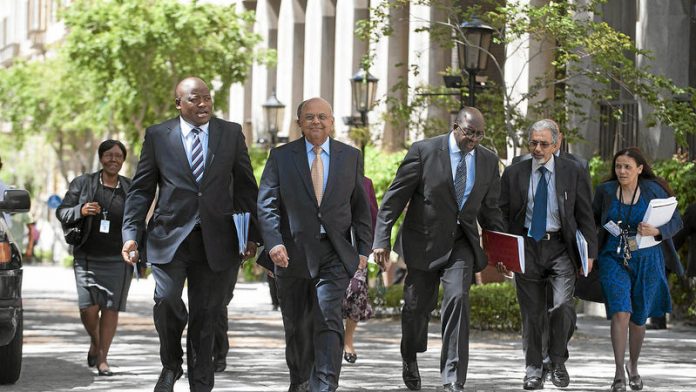 Within minutes of President Jacob Zuma’s Sunday evening announcement that he had made a second change to the finance ministry in a week, social media exploded with jokes.

On Wednesday evening, Zuma fired finance minister Nhlanhla Nene, in a move that shocked local and international observers, and sent the Rand into free-fall.

Nene was to be replaced by an unknown ANC backbencher in Parliament, Des Van Rooyen, further shocking the markets. But on Sunday, Zuma said he had received numerous submissions about his decision, and had decided to move Van Rooyen to the minister of local government, and replace Nene with former finance minister, Pravin Gordhan.

The sentiment on social media could perhaps be summed up as, if we don’t laugh, we will surely cry. We round up the funniest reactions to Zuma’s decisions:

This picture of former finance minister Trevor Manuel did the rounds, illustrating the unpredictability of Zuma’s deployment decisions:

Seems like one should grab a bucket of popcorn and watch the show… #TreasuryShuffle #ZumaMustFall  pic.twitter.com/denLxHYGwh

Van Rooyen especially was the butt of many jokes, ranging from speculation about his reaction to his abrupt firing as finance minister, to questions about his personal life.

Like this tweet, speculating that Zuma would have been preparing himself for his first day as finance minister, without realizing that that day would not happen at all:

Duh-dhlus Van Rooyen was somewhere in a Spa preparing for his first meeting at Treasury tomorrow, then the statement pic.twitter.com/YECcTUc13T

This picture of Van Rooyen and Zuma shaking hands, which seemed to have been posted initially by eNCA’s Lester Kiewit, went viral on Twitter with 1800 retweets.

“Just for the weekend, ne.” pic.twitter.com/xMWSjqtTQ6

The move had some wondering what this would mean for Van Rooyen’s marriage:

Now David van Rooyen will have to deal with “that’s why you were finance min for 2 days” from his wife every time he over spends.

A Twitter account pretending to be the voice of the Rand, which took a battering after the announcement that Nene had been fired, @The_SA_Rand, had this to say:

if you’re happy and you know it, clap your hands. pic.twitter.com/hEtamX6YlE

And this, before Zuma announced that Van Rooyen had been removed:

hey guys what do you think of my new look? pic.twitter.com/JDrhz5Qfma

Perhaps the strongest sentiment underlying the reaction on social media was the call for Zuma to be removed as president of the country. This was subtly illustrated by this post on Facebook by political analyst Eusebius McKaiser, in a meme which also took a light jab at Zuma and former president Thabo Mbeki’s relationship:

Funny but of course… too soon