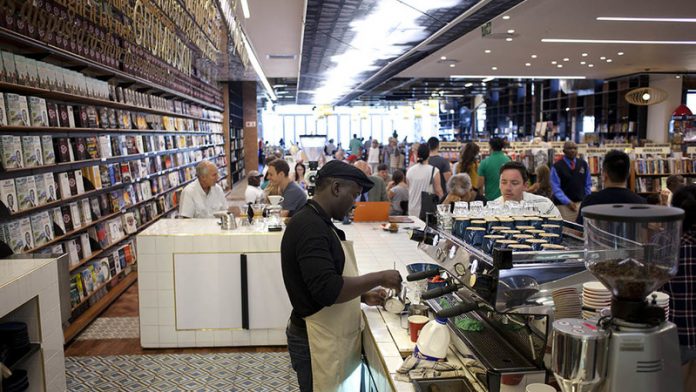 “Never read while eating!” my grandfather used to say in his most stentorian voice. I always wondered which offended him most: the insult to the written word or to the food.

Whichever, he felt that attention should be focused fully on only one thing at a time; not for him any susceptibility to fractured multitasking.

We live in different times, but his injunction has been difficult to shed because books and food, regardless of their quality, both deserve proper attention. So it is with fascination that I wait to see how the Social Kitchen & Bar at Exclusive Books in Hyde Park will play out on the cultural and culinary landscapes of Jo’burg.

The SK&B was launched at a media luncheon last week that advertised the space, its food, its philosophy and the glimmerings of a global vision. The previous bookshop had a degree of Stygian gloom, walled in as it was. That has been banished by the premises breaking through the north wall that separated it from the north-facing car park – that place of itinerance with grand views to the north of Jo’burg. Gone too is the car park, gobbled up by the restaurant and fronted by huge windows.

To get to the kitchen and bar you have to walk through the bookshop. To leave, you must reverse your journey. It’s a trick to get those who don’t go into bookshops to do so.

Foodies, the fickle Jo’burg socialite crowd, and book lovers: these are the prospective clientele of the SK&B, with a hoped-for spill-over effect on the bookshop.

If food is your thing, the SK&B is set up to satisfy. Its executive chef is an Australian, Russell Armstrong, who has made food in three Michelin three-star restaurants – under Michel Bourdin at the Connaught in London, with the Roux brothers at Le Gavroche in London, and at Les Frères Troisgros in Roanne, France.

At the launch, Exclusive Books head Benjamin Trisk spoke of “making books sexy”. Chatting to me later, he brought up notions of a cultural legacy to Jo’burg and of the SK&B being a possible template for similar bookshops-cum-eateries wherever English-language books are needed. Eastern Europe and Asia beckon.

The media release reinforces some of that, saying, “The restaurant is not a restaurant and the bookshop is not a bookshop. They are one fluid whole space, the space for conversation, for care, for friendship.”

The last bookshop in Jo’burg to be a place for conversation, care and friendship was Boekehuis in Melville, brutally shut down by the money-grubbing myopia of Media24. It’s unlikely that the Social Kitchen & Bar will suffer a similar fate.

Just don’t expect to find me reading anything while eating there.