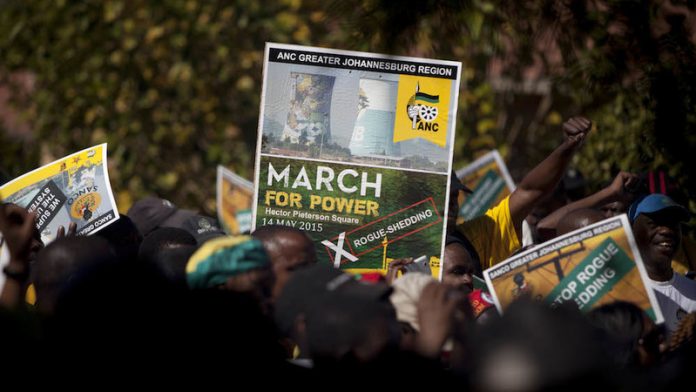 Why still vote for ANC?

I am not sure what more South Africans need to see before they decide that the ANC is no longer a party to take the country forward. It lost the vision long ago and its commitment to incompetence, corruption and dishonesty is starting to show in every facet of our country (Who will stop the wrecking ball?).

Many moons ago, research and lots of experts spoke about a looming electricity crisis, but our government denied it until we had load-shedding. Talk of a water crisis also emerged long ago, but that too was denied – and now we have water restrictions.

Corruption has never been accounted for. Now we have students protesting because of the dysfunctional National Student Financial Aid Scheme. We have e-tolls because our government is finding clever ways to milk taxpayers.

But the puzzling thing is the ANC continues to win votes. I am aware there are the chosen few who are benefiting from dysfunctional governance, but the majority of people do not benefit. It therefore concerns me that people still find it difficult to cut their umbilical cord to the ANC.

People ask me which party I will vote for, if not the ANC. I say we have the Democratic Alliance. We have given the ANC a chance; can we give the DA a chance?

No one is perfect and, yes, the DA has its faults, but it’s not our current government of vultures and hyenas. We have a president who costs us billions yet sleeps comfortably, accountable for nothing and to no one. Do we really deserve this as South Africans?

The ANC has served its purpose. It’s time for us to allow it to hand over the baton. We deserve inspiring, intellectual, authentic, visionary leadership. We cannot settle for Jacob Zuma.

Voting on the basis of the past must fall, corruption must fall, incompetent leadership must fall, crime must fall, and disengagement from critical issues such as poverty, youth unemployment, climate change and women empowerment must fall. – Lesego Setou, Johannesburg

The nuclear deal is threatening to take South Africa’s democratic processes into meltdown (Fallout from nuclear tender meltdown). Don’t blink because this disaster is happening with lightning speed, faster than you can say “tsunami”.

On Tuesday last week I was part of the last public meeting giving input into whether nuclear was a “sustainable development” best suited to Thyspunt, 80km downwind from Port Elizabeth.

On Wednesday our finance minister was “redeployed”. One key reason: he said “no money in the bank, no deal” to the nuclear wish. On the same day he was shown the door, Cabinet allegedly gave the go-ahead for the nuclear procurement process to start.

On Thursday, despite repeated requests for more time to allow the public to have its say, the public comment period closed for the environmental impact assessment (EIA) of the first new nuclear plant.

The Gibb Projects-run process, with Eskom as the applicant, says that nuclear is necessary and that Thyspunt is the preferred site.

The EIA process was launched in 2007 and its data is confusing, to say the least – bizarre things such as the report giving three prevailing wind directions, key statistics quoted from the 2001 census, and an opinion that Humansdorp (population 14 000) will have little problem accommodating 6 000 to 8 000 migrant workers for five to 10 years – despite existing water shortages, housing backlogs and sewerage issues, despite the lessons from Mossgas and Medupi!

On Monday, Business Day reported Cabinet’s decision to start the nuclear procurement process. It also revealed the existence of studies done by Deloitte, KPMG and Ingerop in 2014, which allegedly say the nuclear deal is unaffordable – the exact opposite of what the department of energy has been saying.

The existence of these studies was never disclosed during the public process. Did Gibb and Eskom know? How do you judge whether something is worth it if you don’t know what it costs? Our question has always been: “Can we afford it?”. Eskom has never given a direct answer; instead: “It’s necessary – we need nuclear in the mix” is their standard response.

It’s a key omission and a serious question of integrity on their part if they did know and said nothing. Like Medupi and Kusile, can we afford another blank-cheque megaproject? What does it mean to say “nuclear is necessary” when you’ve known all along that we don’t have the money for it? When we already have 16 renewable energy projects in this area that, in two years of their initiation, are producing much-needed electricity?

We can churn through our finance ministers until one of them gives us the answer we want, but no matter how good their conjuring skills, the elephant in the room remains. We cannot go nuclear if we cannot afford it. – NoPEnuke

Mkhwanazi: A journalist who touched lives

I was deeply saddened to hear of the death of journalist Thami Mkhwanazi (Memories of Robben Island). When he was working on his exposé of apartheid practices at Unisa in the late 1970s, he interviewed me on the phone about one incident in which I was involved.

I had just joined Unisa as a junior staffer and there was an attempt to bar me from a cafeteria reserved for blanke personeel (white staff). I refused and fought my way in.

Mkwanazi got the story published in the English press; this caused Unisa huge embarrassment, and a lot of trouble for me – which followed me throughout my 30-plus years at the institution, up until my recent retirement.

Of course the incident led to the opening of the facility to all. As for Mkhwanazi, even though I didn’t see or hear about him since, I have always admired his courage and selfless commitment to challenging the brutalities of the apartheid regime, when it was neither safe nor of any personal gain to do so. – Shole Shole

The class character of police violence

Police violence and the murder of black people in the United States have provoked outrage and protest around the world, including on the continent. But, why is there so little outrage over police violence in African countries?
Read more
Coronavirus

The rise of civil society in South Africa