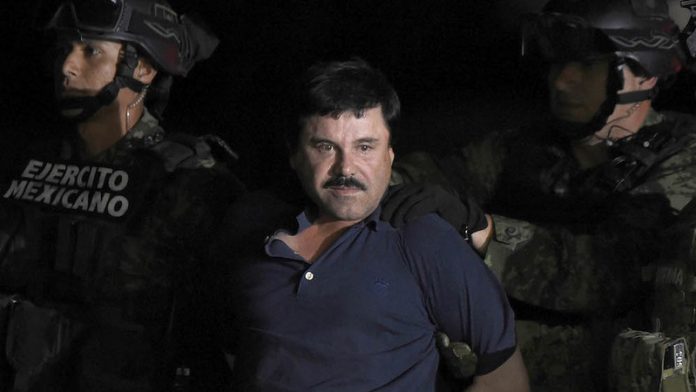 Behind the drama of the manhunt and the surreal involvement of actor Sean Penn, the rearrest of Joaquín “El Chapo” Guzmán constitutes a fascinating and important moment for Mexico and the world of narco-traffic.

There are some certainties: Guzmán is not a mobster, he is a businessperson – an astute one – dealing in a commodity on which our societies are as depressingly dependent as they are on oil: cocaine and other hard drugs, including heroin and methamphetamine. When the financial news reports the current price of an oil barrel or the value of bullion, it ought to add the day’s rating for a kilogram of pure cocaine, if we are to know what is really going on in the global economy.

Guzmán’s business is assured by the fact that there is no chance of our dependency on drugs abating, any more than there is of our banks being suddenly unwilling to welcome the vast profits made from dealing.

The fact that Wachovia and HSBC got caught – and admitted to – facilitating Guzmán’s cartel business means merely that some other bank is now doing so. The whole show goes on and on and, in this regard, Guzmán’s comment to Penn that drug use will continue after his demise is spot on.

But in what way might the plates have shifted in what narco-traffic calls la plaza (the turf) to bring about this rearrest? And how will the business, and the violence, be affected?

The first possibility is that it has been staged in some way, and that Guzmán will do what he has always done (and as his predecessor, Pablo Escobar, did in Colombia): run the business from jail. And, even if Guzmán is neutralised in prison, an heir could take over the cartel and run it along his principles.

Both of these scenarios presume that the Sinaloa cartel, the world’s biggest and richest criminal syndicate, remains so and enjoys a relationship with the Mexican state – or sufficient elements within it – that involves conviviality at best, complicity at worst.

The alliance, such as it has existed for decades between the state and Guzmán (and his forerunners in the old Guadalajara cartel), is logical: the old-fashioned corporate “pyramid” cartel is best equipped to keep order – the pax mafiosa.

Contrary to popular belief, the mafia prefers peace to war, and things get violent – and did so in Mexico in 2006 – when the plaza becomes unquiet, not when power is exercised effectively. But there comes a point when the state’s ally in the criminal world becomes so powerful that it constitutes a state within a state and too great a threat. This is what happened to Escobar’s Medellín cartel in Colombia, and the time came to take him out.

It could be that disaster-prone Mexican President Enrique Peña Nieto (or, at least, the oligarchy that represents “permanent Mexico”) judges that moment to have arrived, and that this arrest is for real. Many expert commentators have posited that it seemed so.

It may well be that Peña Nieto cannot risk a further tragicomic embarrassment in the appalling farce of his presidency to date, and a further outcome of the arrest is that Guzmán will be extradited to the United States – that the US will claim its quarry and try Guzmán itself, with no chance of any miraculous “escapes”.

This would create a compelling situation: Guzmán has very good friends in very high places north of the border as well as on the Mexican side, not least in financial and arms-dealing circles. If he plays his cards intelligently in court, he could bring down a lot of high-level people.

For this reason, the trial of the century to date will probably be held in secret – and there is a precedent for this: the conviction in Houston of Guzmán’s principal rival, Osiel Cárdenas Guillén, founder and then leader of Los Zetas.

Which brings us to a last, intriguing – and potentially terrifying – possibility. The Sinaloa cartel is the last of the old patrician, corporate cartels – akin, on more familiar terrain, to the Sicilian Cosa Nostra. Guzmán is the last old-school “don”, the last Robin Hood narco.

In Sinaloa, he is praised and admired more than he is feared or hated. He distributes alms of sorts; his serfs will tell you how he flew their sick child to hospital in his plane, gave flowers to the church on Mother’s Day, provided electricity to a school. Contrast this with the situation in places controlled by Cárdenas’s Zetas: you would be ill-advised to even mention their name. Their rule is a vice grip based on sheer terror, not baronial patronage.

Just as Cosa Nostra was overtaken first by the Neapolitan Camorra and the Calabrian ’Ndrangheta, so there is the chance that the Sinaloa cartel is damaged, buckling under the intensity of the assaults on its hegemony by the ferocious Zetas and their allies (among them the Beltrán Leyva cartel, which was once part of El Chapo’s federation).

Narco-cartels are not adversaries of global capitalism, nor even pastiches of it: they are its role models. Free trade across the Americas was invented not by Bill Clinton and the presidents of Mexico and Canada, but by Escobar.

But that was another generation, the one that raised Guzmán. In the world of narco-genealogy, which is no different from the generational evolution of any corporation, new cartels like the Zetas set the scene for our world of pure, unfettered capitalism in the wake of the now outdated patrician corporate model. They are leaner and meaner, with a more appositely brutal understanding of the vicissitudes of the cocaine market and the many others that operate in cocaine’s slipstream.

It is possible that the advance of the Zetas and their allies forms part of the backdrop of Guzmán’s arrest, that Guzmán can no longer be relied on to deliver the pax mafiosa, that elements of the state controlled by or loyal to Guzmán now find that this is no protection.

The deep trouble exploded in 2006 when the plaza was contested (by the Gulf cartel and Zetas in the northeast, and La Familia in Michoacán) and the state decided to become a player in the game, and the more the sands shift, the more the violence intensifies.

If the advance of these new, Zeta-led cartels in the narco-nightmare is part of the story behind the arrest, then it can only get worse before it gets better – if it ever does. – © Guardian News & Media 2016

Ed Vulliamy is author of Amexica: War Along the Borderline, published by Picador USA and Vintage UK

The ruling, which does not allow for the sale of the drug, is now under review by a higher court at the government's request
Read more
World

Puffing away on nicotine is unhealthy and socially no longer acceptable, but people do struggle to give it up
Read more
World

Bank tied to Fifa scandal has checkered past

A bank owned by a Brazilian billionaire has been accused by US prosecutors of processing millions of dollars in bribes, including to Fifa officials.
Read more
Special Reports

If only I knew then what I know now

A former cokehead writes about the challenges of maintaining an identity as a recovering addict.
Read more
Health