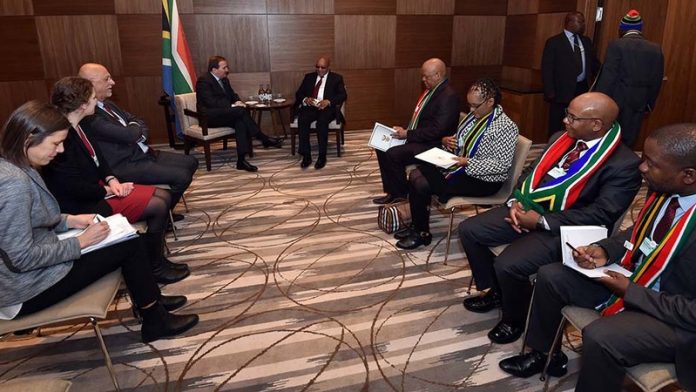 South Africa has travelled to the World Economic Forum (WEF) in Davos with a “unity of purpose” and is “very clear about what we are coming to achieve”, President Jacob Zuma said at the event.

But back home, not everyone agreed. Even as he spoke, members of the Black Business Council were accusing the government of failing to take black business seriously, and of failing to get their input before leaving for Davos.

Some members of the council also complained about being excluded from the South African delegation, which arrived in Switzerland this week for Zuma’s first major global appearance since the start of the currency crisis he triggered by firing finance minister Nhlanhla Nene.

The South African team included seven Cabinet ministers and a large business delegation made up of company chairpersons and chief executives.

The Black Business Council’s chief executive, Mohale Ralebitso, said this week his organisation could have made a meaningful contribution, but it had not been invited to a briefing before the group left.

One member of the council, who wanted to remain anonymous, blamed the treasury for deliberately excluding the body. “How can you talk about Team South Africa if black business is not represented there? They [the treasury] don’t take black business seriously,” he said.

Ralebitso said that the organisation had expected the government to work with business leaders to deliver a united message for “South Africa Inc”.

“The only issue we have is with excluding black business from the WEF briefing in South Africa before the delegation’s departure, as we can contribute to the message and perspective on South Africa and its prospects, our prospects,” Ralebitso said.

Zuma’s spokesperson, Bongani Majola, said the government had played no role in organising the business delegation to Davos.

“We have explained to the leadership of [the Black Business Council] that attendance of WEF is discussed with WEF directly by businesspeople who join and pay WEF. They also pay their own way to Davos,” Majola said.

He said the planning meeting, which was held in Pretoria last week, was organised for confirmed WEF delegates and was not a general business briefing.

“It is unlike the presidential business working group meetings that are open to Busa [Business Unity South Africa] and the BBC [the Black Business Council]. Note as well that Mr Jabu Mabuza, the Busa president, who gave interviews after the Pretoria meeting, was also invited as a WEF delegate, having made his own arrangements with WEF.”

The treasury’s spokesperson, Phumza Macanda, said the department did not invite people to Davos. “The pre-WEF breakfast is normally for people who have confirmed with WEF so that business and government can speak with one voice on that international stage. But even we as government get the list of delegates from WEF. Government is responsible for the government delegation only.”

Ralebitso said he was surprised when he received a call from a government official in Davos, asking him to speak to the media there.

“I received a call yesterday [Wed­nes­day] from a DTI [department of trade and industry] official to engage media at WEF and explained that, while we had a view on the issues under discussion, the BBC could not comment on the specifics at WEF as we were not represented there.

“I later engaged a senior official in the presidency to explain that the Black Business Council was not at WEF and would therefore not be doing interviews on behalf of South Africa Inc,” Ralebitso said.

In his speech to the South African delegation in Davos, Zuma sold the country as an obvious investment destination.