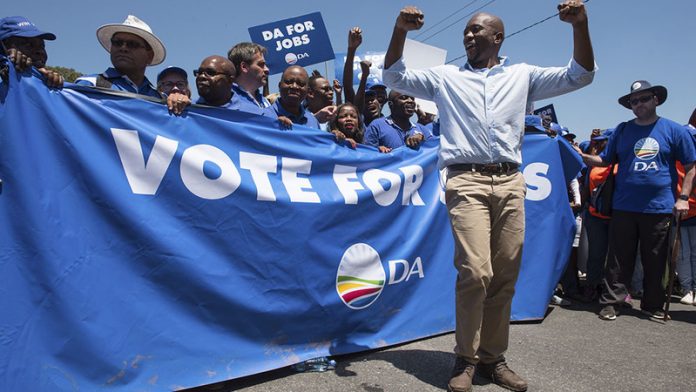 Racism in the Democratic Alliance is real, claim senior black people in the party, who add that nothing will change until DA leader Mmusi Maimane breaks ranks with the white men running the show behind the scenes.

“I feel powerless when my activists come to me and say they are victims of racism from senior people in the party, who say they should be grateful that the DA keeps them busy because otherwise they would probably be out stealing and killing people somewhere,” said one constituency leader. “I mean, what is that?”

These allegations were hinted at last week by the party’s former parliamentary leader, Lindiwe Mazibuko, who last week wrote a hard-hitting column in Business Day criticising “a culture that isolates black members and leaders” and “the almost exclusive dominance of white males within the party’s ‘brains trust’?”.

Now, several black DA leaders and members have revealed their own experiences of racism in the party and of the so-called puppet masters behind Maimane.

The Mail & Guardian interviewed 10 black DA members, five of whom hold leadership positions. All said they had experienced repeated incidents of racism in the party.

“We just live with it [racism],” said one national head office staff member. “We talk about it amongst ourselves, but are too scared to report it because we don’t want to lose our jobs or be victimised further.

“Even if you report it, nothing will be done anyway.”

When contacted for comment, Maimane’s office denied the racism allegations. “We are not going to give oxygen to nameless and faceless individuals who make unsubstantiated claims behind the cloak of anonymity,” said DA national spokesperson Phumzile van Damme.

“We have a strong culture of robust internal debate and they are welcome to raise any matters through the relevant party structures.”

Maimane, who has been on a drive to confront racism in the party, has dismissed Mazibuko’s comments, saying she was “speaking in her own capacity”.

But a DA representative in a provincial legislature disagreed, saying Mazibuko was speaking on behalf of the “voiceless and scared” when exposing internal racism in the DA, because the party tended to brush complaints aside.

A DA federal executive member added: “It makes me angry when I bring up issues of racism and I’m told we need to focus on elections and things that will win us votes.”

The 10 party members elected to remain anonymous, citing directives from the party’s upper echelons to avoid race issues and focus on the economy, education and jobs.

“People in the party are saying racism is not important when you bring it up, as if it’s something not to be discussed or spoken about,” said the member representing the DA in one of the provincial legislatures.

Many of the 10 are concerned about the influences behind Maimane’s actions.

The federal executive member said: “Time will tell if Mmusi will change the DA for the better. For him to make fundamental changes, he needs to stop depending on certain people. The brains trust are his advisers and these are the people driving the party, so he won’t get the outcomes he wants if this group stays in place.”

The constituency leader added: “I have no faith in Mmusi’s leadership. His advisers are very satisfied with the way the DA is currently.”

Who is in the ‘brains trust’?

The “brains trust” – a term coined by Lindiwe Mazibuko, the former Democratic Alliance parliamentary leader and now a Harvard fellow – refers to a dominant group in the party that sets the agenda and advises the party leader, Mmusi Maimane. But who are they? The DA members the Mail & Guardian spoke to this week narrowed it down to nine.

Athol Trollip
He is the DA’s federal chairperson and its spokesperson on rural development. Trollip lost his parliamentary leader position to Mazibuko in 2011. He has been described by DA members as the caucus leader of Maimane’s brains trust.

He scoffed at assertions that he was pulling Maimane’s strings and said: “First, I’m the chair of the party and Mmusi’s right-hand man. That doesn’t make me a puppet master and those who make such claims are disconnected with the workings of the party. Lindiwe Mazibuko’s comments are problematic and racial themselves and her advisers are no different to Mmusi’s.”

Trollip added that his focus was on helping to build a nonracial party and “it doesn’t matter who the leader is”.

John Steenhuisen
He is the DA’s chief whip in Parliament and party members regard the former DA leader in KwaZulu-Natal as Maimane’s right-hand in the House, despite Trollip’s claim to that title.

He also ran Maimane’s campaign in the run-up to the elective congress when he stood for the national DA leader position following Helen Zille’s resignation. His fiery temperament has played out on several occasions during House sittings and on social media.

When asked to comment on claims that he was a member of the brains trust, he said by SMS: “How professional. No comment.”

Gavin Davis
Davis served as the DA’s executive communications director before becoming a parliamentarian. He oversees the basic education portfolio. Davis has publicly clashed with Mazibuko, and was on former leader Zille’s side.

Geordin Hill-Lewis
He is Maimane’s chief of staff and formerly served as the DA leader’s counsel in Parliament.

Paul Boughey
As the DA’s chief executive, Boughey is regarded as Maimane’s go-to man on the operational side of the party. He is also one of the DA’s election strategists.

His response to being labelled a member of the brains trust: “I am the [chief executive] of the DA, and as such the operational head of the organisation. My job is to implement and operationalise the decisions taken by the political leadership, which is a diverse grouping.”

Asked how he would factor in the race rows that have tainted the party’s image for the DA’s election strategy, he said: “Mr Maimane’s recent speech on race set out very clearly our position on race, and how we are committed to diversifying our party even further, and to ensuring that we have effective redress and a growing economy to ensure that we achieve substantive equality.”

Jonathan Moakes
Moakes resigned as the party’s chief executive at the end of 2014, saying he wanted to spend time with his family. He made a return a few months later and is now the DA’s chief strategist.

James Selfe
As the DA’s federal executive chairperson, Selfe is seen as the organisational head of the party.

Tony Leon
He is a former national leader of the DA and was succeeded by Zille. The party under Leon was known for its “fight back” campaign and perceived as primarily a home for white voters.

He spent three years as South Africa’s ambassador to Argentina. Leon has returned home and has remained active in commenting on the party’s direction, particularly criticising the decision to endorse black economic empowerment policies.

Helen Zille
Maimane’s predecessor as DA leader, Zille began to turn around the party’s image and increase its diversity. But she became increasingly unpopular towards the end of her term, getting embroiled in Twitter spats, making problematic comments on race and allegedly coming down hard on young black leaders, such as Mbali Ntuli and Mazibuko, when they differed with her.

Zille, Selfe, Moakes and Davis did not respond to requests for comment. – Ra’eesa Pather & Nelly Shamase

Nelly Shamase is a former KwaZulu-Natal media manager for the DA.

A previous version of this article incorrectly stated that Hill-Lewis and Leon did not respond to requests for comment. This was incorrect. The M&G apologises for the error.